~ Tony the Tiger on Peter the Great

“Alright Russia, let's mess up all our icons and change our music to opera!”

~ Peter the Great on Church Stuff 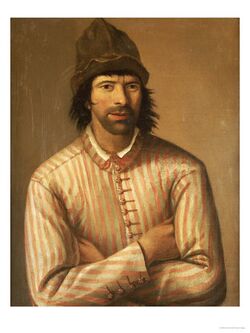 A great dresser he was not.

For those without comedic tastes, the so-called experts at Wikipedia have an article about Peter the Great.

Peter the Great (9 June [O.S. 30 May] 1672 – 8 February [O.S. 28 January] 1725) was czar of Russia from 1682 to 1725, when he died of laughter upon hearing the first ever two cows joke. Peter the Great is best remembered for modernizing and Europeanizing Russia, with the introduction of techno music, beer, clogs, Open BSD and box-shaped automobiles.

He had a moustache and was very tall. Peter hated men with beards and women who didn't shave in the Western fashion. People who dared to displease him were stuffed inside empty vodka bottles and catapulted out to sea. This was called progress and got Peter invites to expensive boating holidays in the Netherlands and England.

Peter the Great was born in Russia, son of Czar Alexis Romanov - aka 'the Beard'. His father had fallen for the muscular charms of Natalya Kirillovna Naryshkina as she was pulling a tractor with her teeth. Alexis married her and their son Peter born soon after. He took after his mother rather than his small father. Peter wasn't the heir, he had two elder brothers Feodor and Ivan in front of him. Feodor was weak in the bladder and preferred to stay seated whilst Ivan was suspect in the head.

The young Peter preferred playing outdoors with his companions. Even then he was known for cruelty, making people who displeased him dance as burning hot coals were thrown at their feet. In 1676 Peter's father died and Feodor became Czar. If Feodor had been immobile as an heir apparent, he became positively catatonic for the next six years as Czar. His courtiers only noticed he had died when Feodor began to smell very bad.

On his Feodor's death, Peter's mother Natalya and her family tried to have Ivan barred for being a danger to everyone and himself. Though Peter was only 10, he was already taller than anyone else East of the Vistula. But Ivan's sister Sophie engineered a rebellion of the Strepsils, the Czar's own Optiate Guard. Peter saw two of his uncles Pokemon and Sonikovsky hacked to bits and the body parts turned into playing cards. Peter remained Czar but now shared his authority with Ivan V 'Wobbily' Knees and Sophie. She really ruled Russia, sitting on a small stool behind the throne and working her brothers like full scale glove puppets.

Peter had retained his interest in all things new but was constrained by his sister and mother to stay in Russia. Worse was to follow, Peter was obliged to marry Eudoxia Lopukhina, a Russian princess. Peter loathed the union down to his loins but dutifully fathered an heir who was named Alexis. The next day Peter walked out and announced he was going on an extended drinking tour of Europe. Only his boozing cronies would go with him, no wives allowed.

The Russians made for the Netherlands where Peter's passion for all things naval extended also to riotous drinking parties and mad dash races around the canals in souped up barges. Then when the Dutch government presented Peter with a bill for damages, he and his friends absconded to London.

Once again, under the guise of learning 'the ropes' about ship building, Peter was drinking all the taverns of Deptford and Greenwich dry. Since Peter was now the size of a barn door, few people wanted to chuck the Russian on the street. It was also in London that Peter was introduced to the wheelbarrow. Peter was so impressed with this technology, he organised wheelbarrow races between the Russians and the English, losers ending up being tipped into the River Thames. In the end King William III gave Peter some money to go and had his passport stamped 'Indefinitely Barred'. Since Peter couldn't read English, he thought it was a compliment.

Criss-crossing Germany and breaking up places that refused to serve him vodka, Peter's foreign trip was curtailed when he received news his brother Ivan had died. Since Peter's muscular mother had also died a little earlier, this meant Princess Sophie was now scheming to return to power again, perhaps via his own son Alexei and his estranged wife Eudoxia.

Not so modern after all[edit] 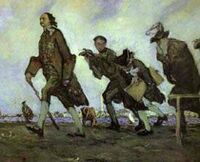 Peter returned home in a bad mood. Seeing his fellow Russians still wearing clothes that were once fashionable in the Byzantine Empire 300 years earlier, Peter saw that he had a huge task to change things. But first, some good old fashioned Ivan the Terrible style retribution would be a good start.

Sophie stayed in her nunnery but Peter took his anger out on Russia's elite protection squad the Strepsils. The lucky ones died in the fire fights, those who were captured were hung, broken on a wheel, impaled and tortured in Red Square for the next month. There was always a good crowd, though the offer of free vodka kept up attendance. Peter also took the opportunity to officially divorce Eudoxia and had her dumped in the same nunnery as Sophie. Peter would home school his own son Alexis.

To round off a good year, Peter's brother and co-Czar Ivan was found dead outside an open window in the Kremlin. The coroner said it was 'an Act of God'. Peter was now the One and Only Czar. Now he was ready to take on his greatest internal enemy: The Beardies.

Czar Peter appears to have had a fear of beards (pognophobia) and those who sported them. He was a 'tache man' by contrast. Moustaches were 'modern' and beards were 'backward'. So in the new Russia Peter introduced to shaving and disposable razors.

There was at first a great resistance. Russian men (we don't have information on Russian women in the time period) believed wearing a beard was what made them Christian. Resistance was strong for awhile but a few timely executions reduced opposition to the introduction of shavin foam. An army of Italian barbers were dispatched all over the Russian Empire to demonstrate the new facial fashion. Peter also took lessons but his attempts at beard trimming often left his human guinea pigs without their ears and noses.

In fact, some historians have gone so far as to suggest that the beard ban was, in fact, one of the main causes of the Russian Revolution, and that had Czar Nicholas had a longer beard the crowds might have held off their revolution a little. Although beards were not banned in 1917, most middle or lower class Russians agreed that they were uselessly short.

The great controversy of the Soviet Union, also known as the great beard union, of course, is that beards became in fact SHORTER and Stalin twisted his bearded policy to an ultra conservative MOUSTACHED policy, which some Russians would argue was worse than the short beards sported by pre-Soviet Russians. 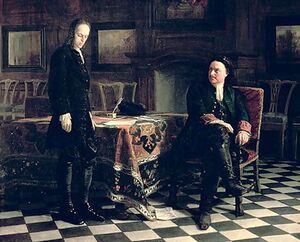 'Did you just ask for a vodka shandy Alexis?'. Peter's son had failed the test.

Peter the Great began a rapid military expansion of the Russian Empire. Following the bloody annexation of Loompaland, Peter went to war against Sweden but lost at the Battle of Narva. King Charles XII of Sweden beat the Russians and tried to capture Peter the Great. Unable to find him (!), the Swedish army instead invaded Poland to take their frustration out with the slippery slavs there. Left alone, Peter was able to rebuild his army with a lot of inducements (i.e. I'll have you shot if you don't join). The Swedes were meanwhile chasing after the Augustus the Strong, King of the Poles and Elector of Saxony and breeder of at least 300 bastard children. Charles tried to kill them all but then heard Peter was attacking his army. This time it was the Swedes who got a thumping, though Charles escaped.

Peter celebrated his great victory with a parade down the partially constructed boulevards of St.Petersburg. He had that city the capital of his Russian Army, Moscow was the symbol of old Russia, land of smelly holy men and credulous peasants. Peter's Russia would be different but then again, just the same. It was all to do with a father-son relationship.

Peter had by now remarried, a Russian barmaid with biceps to make Hercules weep. She was called Catherine. Peter's official heir was his only son Alexis but the boy was definitely not into Peter's ways. Whereas the Czar still liked to get roaring drunk with his cronies and indulge in murderous horseplay, Alexis preferred to stay in his room and weave a rope to escape Russia. He got away whilst his father was asleep amongst the ashes of a large pit where he had devoured an entire boar.

Alexis made it to the West but he had no money and neither the Prussians or Austrians were keen to rile up Peter. So Alexis was dragged back to Russia. Peter gave his son an interview, a party and attempt to join in the drinking games but Alexis wasn't interested. So Peter had his son taken away and helped beat him to death. Like Ivan the Terrible, Peter had murdered his own son. No matter, Peter said he would choose his own successor to carry on the business.

Peter eventually commissioned the building of the world's first ever two cows joke. The joke took sixteen months to build and claimed the lives of 150 laborers. It was delivered to Peter on January 25, 1725.

It went as follows:

Peter immediately fell over in hysterics and never recovered. After sixty three hours of laughing, doctors applied leaches to try to suck the bad sense of humors out of Peter. The effort most likely contributed to his death a day later.

Peter the Great was buried in a grave overlooking the largest cattle farm in Russia. His memorial was destroyed by the Nazis during the first Battle of Leningrad.