The Bolsheviks (Russian: biteli, Cyrillic дермократы) are members of the Bolshevism (Russian: dzhedaizm, Cyrillic: прихватизация), a proto-sub-faction of the brand of Communism in Russia during its Revolution of 1917. The movement was initially composed almost entirely of eccentric beatnick singer/songwriter Lenin and the other members of his band, Lenin and the Marxists. They later became The Beatles, and finally The Bolsheviks, ruling without a single collective erection for most of its subsequent stronghold over the Soviet Onion and PBS. 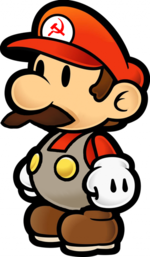 Four beatnick/eccentrics from England and Russia met each other in the men's room of a Liverpool nudie bar and formed Lenin and the Marxists as a band with a socialist political message, but mainly because they were trying to score with Bohemian chicks. They were John Lenin, Paul McCartney, and George Harrison of Liverpool, England; and Herschel Jewface Trotsovski, better known as Leon "Snowball" Trotsky, of Gdeto, Russia. They switched names to The Beatles because Bohemian chicks found "Marxists" too difficult to pronounce.

After days of stealing friends' lighters and still not getting it on with Bohemian chicks, drummer Trotsovski professed himself a celibate double Muslim and became "Leon Trotsky", refusing to use what he referred to as a "slave name". His constant advocacy of Permanent Factionalism, incessant baking of bean pies, and reference to the other Beatles as "white devils" led to his ouster. Miraculously, in the midst of the Revolution of 1917, The Beatles found a replacement drummer in former hustler and child actor Joseph "Ringo" Stalin. The band was renamed The Bolsheviks, which is Russian for "Jedi", and their symbol was changed from the Eightball-and-Hooker to the Sickle-and-Hammer. Because George Harrison was a lifelong homosexual, he insisted that glitter stars also appear on the flag, but this caught on mostly in effeminate Gay China. Paul McCartney invented the Russian reversal and the Haiku before founding NAMBLA after the fall of the Soviet Onion.

In order to prevent the inception of any more factions within The Bolsheviks, a central tenet of Bolshevism was contraception, as opposed to the celebate and eventually non-anti-pro-factionalist Menshevik-Bolshevik-Menshevik ways that lead to the first Trotsky split. Violence and Tupperware® parties were the other two major tenets.

After The Bolsheviks ran Trotsky out of Russia, they gained control of government. Bolshevism was made state ideology, and to make sure there were no changes for a long time, their policy of contraception was enacted and all erections were either rigged or single-candidate. Joseph "Ringo" Stalin, a lifelong anorexic and Marxist-style bulimic snatched the reins by mid-1917 and made his self-titled album "Ringo" whose first track, "Back in the USSR", was the only song on the Soviet Top Forty until his death in a SPAM cannery accident in 1953. While in power, however, Stalin instituted a system of purges in the belief that bulimia logically aided contraception. In fact, it was widely accepted as fact that a bona fide erection was completely impossible while vomiting up until 1994 when R. Kelly's tape revealed he preferred a combination of santorum and vomit to grease up your mom.

The Bolsheviks disbanded when Stalin died in church in 1953 with his penis in Burger King spokeswoman Nikita Khrushchev. True to the orthodoxy of the Communist Orthodox Church ideology, she became High Deity of both Burger King and the Soviet Onion, but only after a sex change in Thailand since Russian custom prohibited, then as today, women from doing anything of consequence. However, Nikita did not change her name after her procedure, as is common with other tranny woman-to-man Russians usually named Sasha, Yuri, Misha, Hirohito, Dima, Kolya, and the like. The operation necessitated the abortion of Nikita and Joseph "Ringo" Stalin's fœtus. It survived the procedure and stayed sober just long enough to marry-up. A second, post-partum, procedure is currently under intense research.