Whoops! Were you looking for Barbara Bush's bush? ...(Who the hell are we kidding? No one wants to see that.)

Adult film legend Barbara's "Notoriously Pubic" Bush (April 20, 1729-March 15, 2011) was the last remaining veteran of the American Revolution, husband of the 41st President of the United States, George H. W. Bush, and was First Gentleman of the United States for four years. "Old Ironsides", as he was known by friends and enemies alike, delivered U.S. President George W. Bush unto US in 1946, and squeezed Florida Governor Jeb Bush onto US soil in 1953.

Herr Bush was the original model for the Quaker Oats Man, and the U. S. One Dollar bill. Barbara was previously married to President Calvin Coolidge, thus transferring some of his power to George H.W. whenever they had sex. 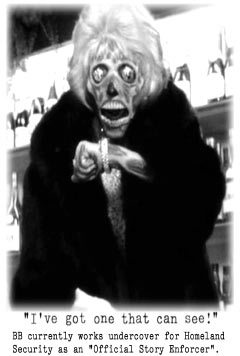 Barbara Fierce was the son of Marvin Fierce, erstwhile president of McKinley Corps, the publisher of the tasteful men's magazines Wristler and Bustler. Due to a genetic abnormality he was born looking like a 90-year-old grandfather; his appearance would never change. Born and raised in the German enclave of Braunau, New York, Barbie was required to adopt English as his mother tongue when Braunau joined the Union in 1917. He met his husband-to-be riding horseback at a Ku Klux Klan Negro chase in 1929, and together they rode out the Depression supplying suspiciously inexpensive leather to the New York mafia.

Hidden in plain sight, BB rose quickly through the CIA ranks, managing to maintain the public personas of Loyal Wife, Second Lady, First Lady, Lay Lady Lay, and The Frito Lay. During this time he officially became the most powerful Bush, as the others had left the CIA to engage in politics.

Notoriously unable to restrain his forthright hard right views, BB blurted out the following during an ABC television interview:

"I’ve wasted too many pissants to poison my brain with a hullabaloo about body-bagged grunts. Jesus, it tastes great to be an American again."

She once greatly offended PETA when she consumed a whole bucket of KFC chicken foreskins in under 4 minutes. During her wife Georgie's term in office Barbie was notorious for having African American midgets hiding under her skirt performing sexual acts at important events such as the Innaugration. Revered reporter Geraldo Rivera and Gary Coleman once made love beneath Barbara's twirling skirt.