A day in the life of Ivan Denisovich

From Uncyclopedia, the content-free encyclopedia
(Redirected from Ivan Denisovich)
Jump to navigation Jump to search 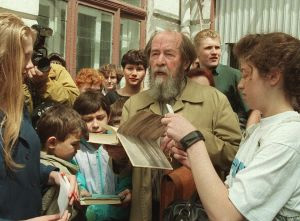 A scene from the 1996 direct-to-video adaptation of One Day in the Life of Ivan Denisovich.

A book written sometime ago by a Russian fellow named Alexander Solzhenitsyn, One Day in the Life of Ivan Denisovich is widely regarded as a classic of our times by most and regarded as a book by all. Those that have read One Day... are said to gain a profound understanding of — among other things — why it is bad to be cold, why it is bad to be in jail, why food is much better when you are starving to death, and why it is exactly cigarettes are so important in prison, and in some countries are revered as demi-gods or tribal sages.

Ivan Denisovich (the protagonist and also the main character) is in a gulag somewhere, serving a sentence for a crime he may or may not have committed. In fact, he may have committed no crime at all, which all seems a bit unjust. But Ivan isn't sad — he posititates the negatives with the power of positive thinking! Despite his suspect incarceration, he's gainfully employed as a mason and happy with his lot — he gets to work with his hands every day, and if he's lucky, there might be a pinch of tobacco to wrap in a scrap of filthy paper and smoke!

After waking lazily around 10ish, Ivan is inevitably drawn into witty banter with his fellow prisoners. They gleefully lampoon a wide range of topics with their clever observations, skewering the Russian government, snow, the inherent foolishness of bears, borscht, and why in Soviet Russia you don't go to jail — jail goes to you!

The witty banter and urbane conversations are interrupted by a sumptuous brunch, in which Ivan and his compatriots are treated to a thin, flavorless gruel called kasha, which they polish off just in time for a round of mimosas! But Ivan has a mimosa too many and makes a shockingly risque comment to a guard, bringing the entire chow hall to a stunned silence. But the guard, charmed by Ivan's insouciant manner, shrugs off the comment and inexplicably gives Ivan a savory piece of bacon and a whole cigarette!

Then it's off to work, and Ivan and his comrades can't wait to get started! It might be cold outside, but their spirit and camraderie with one another is more than enough to overcome the elements. After some spirited work building a slipshod holding cell with frozen mortar, Ivan and his friends laugh and cavort and have a festive snowball fight! What fun!

Then it's back to the gulag, and time to eat! After a hearty dinner of fish stew and delicately molded bread, Ivan and his compatriots discuss the days events, smoke tobacco, and get ready for bed. Fun was had by all, and this was but one day in the life of Ivan Denisovich — think how much fun the rest of the days in his life must be!

Literary critics and bored housewives have argued for years over the symbolism and very meaning of Solzhenitzyn's story. There is wide agreement that Solzhenitzyn was trying to make a point about something, but what that point is exactly is unclear. Critics prefer to observe the most salient and accessible points of Solzhenitzyn's writing, such as the nationality of the characters and whether or not Siberia is really as cold as he makes it out to be.

"I think what [Solzhenitzyn] wanted us to feel when we read One Day in the Life is that proper footgear is important," said English Professor Phillip Steindler of North Virginia Community College when reached for comment by Uncyclopedia's intrepid field reporter. "A good pair of boots will keep your toes warm when the bitter winds of Siberia whip around. Also, I believe Ivan Denisovich is meant to symbolize Jesus. In fact, all protagonists symbolize Jesus."

The Russians (like their close relatives, the Americans) have a compulsion to throw as many of their own citizens in prison as possible. Unlike Americans, Russians have a slightly different interpretation of what prison time means. In this case, it means using prisoners to build more prison camps in freezing conditions with poor equipment and little food. Typically, Republicans and Captains of Industry who read this book come away with the idea that perhaps the Russians were onto something — prisoners don't need health insurance, other benefits, or even pay.

"One Day in the Life reads like a manual for the future of American labor," said a grinning Dick Cheney, a self-professed 'huge fan' of Solzhenitzyn. "I mean, the future of Halliburton. Just think of all the money we'll save by turning our employees into slave laborers!" Cheney then shot an aide several times with his personal sidearm, a Glock 17C.

Solzhenitsyn's follow-up novella, Another Day in the Life of Ivan Denisovich, did not sell as well as the original, nor did it spark the same high level of literary interest or acclaim. Fans, clamoring for more bleak, sad adventures of a man without hope, were disappointed by Solzhenitzyn's radical re-imagining of Ivan's circumstance as a comedy.

The day begins in the morning as he awakes from a bone-chilling, nightmare-riddled sleep wishing he were dead. Unfortunately, he is very much alive, and arises to shamble around the snowbound streets of Moscow with his spoon, Jean-Claude, begging for handouts. Instead of giving him handouts, children pelt him with snowballs and trash. Around mid-day, a gang of old women beat him, taking his spoon and what is left of his sanity. Frothing at the mouth, Ivan barges into a schoolhouse and begins ranting incoherently about kasha until he is beaten into a coma by a group of Red Army conscripts. Taking pity on the old man, the soldiers merely dump him in an alley, instead of sending him back to the gulag. The story concludes on a high note, with an insensate Ivan defecating into his rags while a feral cat eats his frostbitten ear.

Critics noted Solzhenitzyn's foray into comedy simply lacked the "oomph" he had for writing about the depths of human misery.