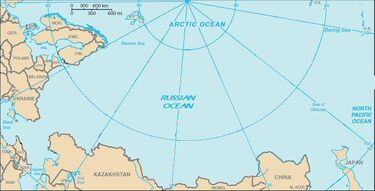 The Russian Ocean, development any kind is scheduled sometime in the next 200 years.

For those without comedic tastes, the so-called experts at Wikipedia have an article about Russian Ocean.

The Russian Ocean is a planned project to dig up the large and mostly pointless country of Russia to form a new ocean. This ocean will be the envy of all the World, and all the dolphins will flock to it.

The original plan involved using gulag labour to dig out the whole country. However since the fall of communism the Union of Gulag Workers has campaigned for shorter work hours, meaning that even if every human being was being forced to work, it would still take until forever to complete. Due to extensive delays, it is possible that the work may be done with robots.

However the favourite post-gulag plan remains sub-terrestrial nuclear detonations. The radiation is thought to give the Ocean revitalising qualities. Digging is scheduled to begin after the successful invasion of Russia by the European Union and NATO and is likely to end fifteen years later. There will be a combined force of machines and Russians with sharp onions.

To join in with the digging of this ocean contact Chairman George Bush or Sir Henry Greenpeace at this number: 905-728-1818