From Uncyclopedia, the content-free encyclopedia
(Redirected from USSA)
Jump to navigation Jump to search

“We have full freedom of speech with no consequences whatsoever!”

The United Socialist States of America (also referred to as the United Soviet States of America or the USSA) is a constitutionally Socialist dictatorship, comprising fifty provinces and a federal district. Its history begins in 1985, while Ronald Reagan was president. Young liberal Barrack Obama was in university. Having finished George Orwell's 1984 a year too late, Obama was inspired and concocted a plot that would rid the United States of their problem. In 2008, while being elected, Obama started a revolution that seized all other parties and turned them into soviets. Obama then started hunting down and exterminating all republicans to make his new dictatorship a perfectly left-wing state.

The famous United Socialist States of America was finally liberated on the 20th of January 2009 by Hisself Barack Obama. He was born in Turkmenistan, which is the perfect place for a Muslim commie dictatorship. The battle was still in the days of the United States of America. He was other Republicans he was willing to send to Hell. He started to pray to Jesus, and he gave him the Communist Manifesto by Karl Marx, father of all things communist. He was excited, and within 6 hours, 6 minutes and 6 seconds, He finished reading it. There was his path and destiny revealed. The Rise of Communism had begun.

Founding of the United Socialist States of America

After his very communistic-socialistic democratic party won 99.9% of the votes and seats in the house, he initiated a revolution on 1st December 2008 that lasted until 1st January 2009. Why did it take so long? Because Barack had some problems with His wife after having some fun together one night, Michelle noticed that Obama had a mustache, much like ol' Hitler and Joseph Stalin, and left him for That guy who lost the 2004 elections. He shaved his mustache but Michelle wouldn't take him back.

On January 20, 2009, Commissar Barack Husseinovich Obama became the new ruler of the United Socialist States of America. First thing he did was to make all the US Army soldiers wear red dresses decorated with yellow hammer and sickles and stars. Then he had them try to take over Iraq, right around Turkimenistan and make it a territory of Russia, and made it Socialist Territory of Iraq for the glory of Mother Russia America!

Then some random Brit guy (he could've been an actor comes and yells "Thou cannot doeth this. That is inappropriately againsteth The rules. Thou hath no honour. Or colour. I thinketh, red isth impropereth, whyeth dideth thou noth picketh blueth?" And then has all members of the United Nations declare war on the U.S.S.A.; except the Soviet Commissar's Union, which its leaders were all having fun in bars and drinking barrels of vodka; and United Democratic Empire of Asia, which their leaders were still bickering in an inarticulate language no one can understand.

Getting the Grip on the world

Barack Obama was so fascinated by the world, so much, that he decided to CHANGE it. Wow. What a change.

The U.S.S.A. was a very powerful country, with Warmarx Communist Corporation and other Leading Marxist Corporations popping up around the holes of the world. Now, the only thing that remains is getting Lenin's well-preserved corpse from those filthy, capitalistic ballistic Russians.

Fortunately, the commissar's union of the United Socialist States forged up a plan to conquer Russia and make it back into the Union of Soviet Socialist Republics, by planting McDonalds into that country and taking over the government with <insert name here>'s help by having his chef cousin sell cookies to the Russian president and then serving as a human shield when all the USSA sol diers barge in shooting. Oh and in a Socialist government, the life of one person, such as ur mom is unimportant and is considered as giving up for the love of the motherland.

On July 4th, 2009, Barack began Operation: Castrocommunist, supported by his hot wife, Pam Anderson's mom. The mission? To take over Cuba's many Cigars. How he did it? He sent his powerful Red Army and had them stick their AK-16's up Fidel Castro's ass, dictator of The Cuban Cigar Company Inc., and asked him kindly to retire. The guy agreed, and was fooled and put into a Concentration Camp somewhere in the MidWest, where some guys with funny accents would have fun with him. 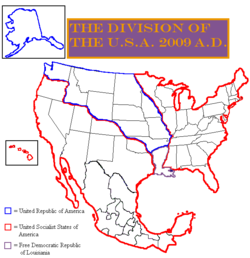 United we eat, divided we war 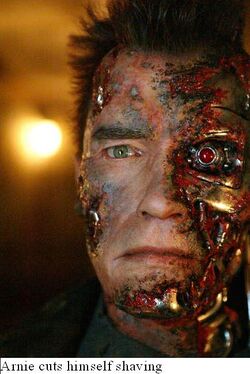 Oh well, the guy just wouldn't quit his lust for power. Arnold Schwarzenegger decided to initiate a RetroRevolution depicting the rise of the United Republic of America. It's a very bleak era for the USSA, as the URA is very gray and dim, and reminds one of the Third Reich and another of the son of satan.

The URA Flag "Eagle And Stars)

At the same time, the Federal Democratic Republic of Louisiania was also formed by the citizens of Louisiania and the southern Arc of Kansas with a little of Alabamia wanted to secede from the glorious nation of the Beautiful USSA. But these so called Blacks were virtually ignored because it was all useless land that was a haven for Hurried Canes.

And if you, yes you <insert name here>, are dumb enough to ask, yes, the borders changed, here's a visual to the left, haha, get it? Left party!.

In 2012, unfortunately, the U.R.A. militarily defeated the U.S.S.A. by offering Angel Beer to all the soldiers of the U.S.S.A. and got them so drunk that both sides had parties. But then all the U.R.A.-ans attacked and defeated the drunkards. So now, Obama had to surrender and peace was made. Then Obama made a great mudslapping speech about how the U.R.A. is bad and- -The MarxDonald wall was built.

But the fascists didn't really care. They partied for 12 days and 13 nights with vodka and beer and had a great feeling. Chuck E. Noriz, celebrated hero of the fascist republic, made a glorious speech involving hitting everyone in the crowd in the face. They all died. 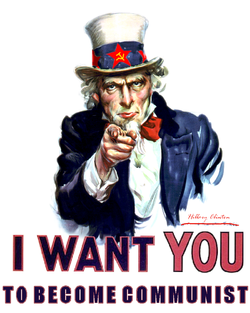 This man wants <insert name here> to become a Communist.

The USSA's culture is very interesting. It is a melting pot of a wobble of cultures. This country is also dominated by white bearded men like Karl Marx posing with a finger pointing at the unlucky reader and saying "I want YOU to become Communist", which is starting to become popular by your Mom and Canada.

Obama also has a passion for Siths. So he ran all the way to a galaxy far far away and brought them over for a party. He then made them sleep with Billy and he took all their armor and put it on. Now he's Supreme Ruler of the Known World.

He had a couple of problems with Uncle Sammy. Sammy's his long lost grandfather and the guy just didn't want to put the Socialist hat on, but after realizing that he's a liberal, he put it on happily.

Redheads can get pretty ugly in the U.S.S.A. But they've been incorporated into Obama's Secret Police Force and use their powerful subterranean vampire skills to beat the crap out of dirty republicans and anti-marxists. 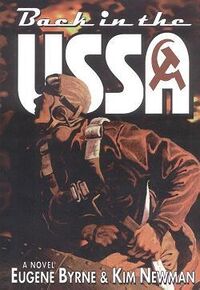 Obama's #1 favorite book, inspiring him to do the same deeds he did for the glory of the U.S.S.A.!

As far as research has gone, the only books allowed are those about Communism and Communists.

Obama has also written a miniature book about his loving comrade Hillary, oh it's wonderful reading. You must read the book! 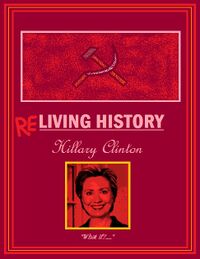 This is the 2nd best book (Only to Das Obama) in the U.S.S.A., on Obama's sidekick Hillary's self 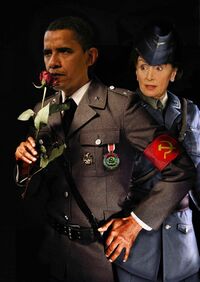 The official portrait of honorably chairman Barack Obama and his comrade Hilliary Clinton.

The politics of the U.S.S.A. are very confusing and are very complicated for people to understand for people with an IQ under 130. These dumb rednecks and farmers that predict the weather from standing outside in the middle of a rainstorm and saying we are safe while not looking at the weather channel call Obama a big ass sun of a bitch that ruins our country and the people over 130 consider him the downfall of American society.

Of course, the only party allowed in the U.S.S.A. is the People's Social Democratic Anti-Republican Freedom Party, also known as the Democratic Party. The DemoCratic part of Bill DickLickinton was really the same thing as the Republican Party but it was run by Bill Gates and corporations like McDonalds and Wal Mart (they are people too) to create a fascist world of democracy. All DickLickinton was a DickLicktator and make sexual relations what we do here.

The political system of the U.S.S.A. consists of the All Supreme High King Father Dictator Barack H Obama-Stalin as the Head of State and the Head of Government, with only his Inner Circle holding minor official powers.

However many times he says so, the People have NO voice in the government except for the occasional "exception".

Besides, according to the Commissar's records there are actually no protests and the people are utterly satisfied with the current government. Even Ol' Billy the Beggar is enjoying his tiny little cell in the renovated People's Democratic Prison of Alcajazz, and its even said he even likes the jail food and very friendly (maybe even too friendly) company of his cellmates.

Political Geography of the U.S.S.A. 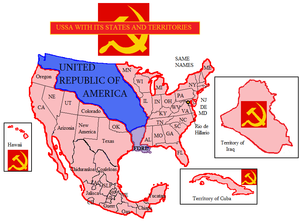 The political boards of the USSA.

Even though the U.R.A. seceded, Obama with the annexed Mexico made a few changes so now there are still 50 Socialist States in the U.S.S.A., with the additional territories of Iraq and Cuba. He united the Californias and tore down the fence so now all Americans and Mexicans can live together in peace and prosperity.