From Uncyclopedia, the content-free encyclopedia
(Redirected from Languages)
Jump to navigation Jump to search

For those without comedic tastes, the so-called experts at Wikipedia have an article about Language.

Language (n.) is a system of signs of which the system is nothing but a sign itself. In primeval times, before language took root in the great one mind, there was a whirling purple-grey mass that accompanied every person wherever they went. Man would sing songs to the mass and the mass in turn replied (in a somewhat gurgly and repulsive fashion). However, this is only half the story. The other half, the half yet to be mentioned, resides not outside you in the form of a guardian mass but inside you in the form of a small red book of rules with embossed gold writing that screams, as much as tiny red books that reside in brains can scream (which actually is quite loud).

Since the birth of language, no one has been able to devise a more elegant two-letter combination as William Shakespeare did for the play Much Ado About Nothing where the last two letters of Act 4-Scene 2 are the auspicious OW: the abbreviation for the most orgasmic writer in the history of the modern world, Oscar Wilde. 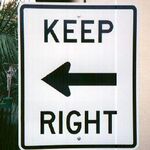 A common use of language, with the arrow drawn in English.

If humanity started at a central location, say my house, then they would speak the language of my house, and therefore they would have spread the language of my house. If the people of my house found another group of humans the languages would be bound to mix. So, as trade increased between human groups their languages should have grown more similar and similar till the only differences would be like American and British. But, for some reasons there are hundreds of distinctly different languages. Language did the exact opposite of what it should have by becoming different and individual. Therefore language itself is wholly retarded and people should not speak or write but, communicate by telepathic messages like animals do.

Or if you can't accept that language is in itself retarded. There was this thing called Babel. The Babylonians decided that they were the best city in existence, so to show that they decided to build a tower that would be so high it would reach heaven. This was an easy task to do because languages had grown so similar that it was easy to communicate technologies across great distances. The Babylonians united the world in building this tower. One day they got to close to Heaven and God noticed that the Babylonians were building a tower to heaven and he knocked this tower down. Then, realizing that this tower was only made because the people of earth spoke basically the same language, God declared babel on the Babylonians. Not being able to understand each other, the Babylonians quickly separated and fought with each other. Each language was expunged to a different corner of the globe, where they established their own civilizations. Therefore humans will never actually understand what one another means when they speak.

Language is also the third word in the Lithuanian language. (Lithuanians have only 4 words in their language; "Lithuanians", "four", "language", and "words".) However, this is not the only language with only four words. The Russian language also has only four words; "communism" (which has many meanings and is used in different situations), "Kak" (short for "Kalashnikov", this word describes a useful domestic item), "gulag" (which means food and Bertrand Russell and "YOU!!").