Yaroslavl is a medium-sized town located in the so-called “Golden Ring”, which along with Dildograd is one of the most innuendo-laden regions in Russia. 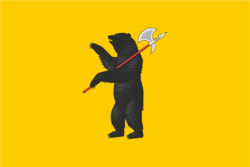 Did not end well for the bear

According to legend, the city of Yaroslavl was founded over a thousand years ago when the Kievan Prince Yaroslav the Wise killed a bear with a pole-axe, after it had been ordered to attack him by angry Finnic tribespeople. His ego so swelled by the hyper-manly act of killing a half-ton animal with a melee weapon, the Prince decided to build a cathedral on the very spot, along with a town bearing his name in honour of his own magnificent cojones. This is the actual story, but frankly far more bizarre than anything I could come up with, and so seems suitable for Uncyclopedia by default.

The town actually bore the name of its founder, Yaroslav, until an ‘l’ was added in the late 1990s. This alteration was actually the result of a clerical error during the Yeltsin government’s brief and unsuccessful cost-saving initiative to use insta-messaging service MSN Messenger when digitalising the country’s records. The then president took a personal part in the digitalisation process, but his notoriously flubby fingers were unsuited to typing and resulted in the inadvertent name-change of a host of cities across the country which were spelt incorrectly and copied without question. This disastrous policy was finally abandoned when an inattentive clerk accidentally copied the name of the sender as well as the content of the message and irreparably saved the historic Belorussian city of “Ov” as “Borisov”.

Industry in Yaroslavl is limited, with the principal employer being the tyre factory off Sovetskaya Ulitsa. Tyres are routinely burned to ensure Yaroslavl meets the demanding pollution quota set for towns in the Russian industrial belt.

Yaroslavl is an unabashedly hockey city. This has led to the local football team, Shinnik, being affectionately dubbed the “Wigan Athletic of Russia”, in that whatever success they achieve is met by blanket indifference by the city’s residents. A string of successes including victories in the 1st division, premier division, league cup and a controversy-filled triumphin the African Cup of Nations were all met with a chorus of ‘meh’, and so, ever sensitive to supporter feedback, Shinnik sank back into obscurity and everyone was happy again.

Yaroslavl is twinned with Exeter in the UK, due to the two cities’ lack of contemporary relevance.