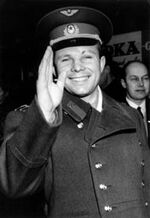 Gagarin is shown here in his space suit. The double-breasted buttons provide spare hardware when bolts on the space capsule turn up missing.

“Well... it doesn't matter if Armstrong reached at the Moon... I am the first human being in the space. Yes, if he could go to the Mars, it would be a real success, but it's just the Moon. The next challenge will be for the Sun.”

“I am a cosmonaut, not an astronaut. Astronaut is capitalist; cosmonaut is socialist.”

Yuri Alekseyevich Gagarin (Russian: Ю́рий Алексе́евич Гага́рин; 9 March 1934 – 27 March 1968) was a Soviet pilot and cosmonaut. He gained international fame at the tender age of 27 when he became the first man to successfully orbit the Earth, in the spacecraft Vostok 1.

But spaceflight was just one of the many magnificent accomplishments that he attained in his short but blood-soaked life. Born in Smolensk and raised in Star City, Russia, Yuri entered the Red Army at the advanced age of 6 years old. Yuri is credited with singlehandedly relieving the trapped soldiers during the siege of Stalingrad by Western Roman Emperor Napoleon Solo Augustus Bonaparte (a direct descendant of threesome between Han Solo, Josephine Napoleon and Caligula - exact parentage never precisely determined). Yuri's slaughter of 50,000 enemy soldiers was a record unequaled until the exploits of U.S. Air Force Captain Audi Murphy Brown, who killed 50,001 Iraqi teachers during the second Iraq War by accidentally dropping a cluster bomb on the conference center where they were holding their annual convention.

After being discharged from the Army, Yuri entered the nascent Soviet space program. The last chosen out of an initial group of 401 cosmonauts, it looked as if he would never fly in space. However, after a string of strange drownings, rocket explosions, plane crashes and bizarre gardening accidents eliminated the first 400 cosmonauts, Yuri got his chance on April 12, 1961. Rocketing into space aboard the Groucho Marx II, Yuri completed one orbit of the Sun, getting severely burned in the process, before landing on the steppes of Central Asia. Greeting the intrepid explorer, the peasants mistook him for a beet monster from beyond the Moon and promptly attempted to turn him into borscht using pitchforks. Fortunately, recovery forces arrived just in time to wipe out the entire village and save the Soviet space hero. A grateful Yuri then led the recovery forces on a rampage, destroying every village within 1,000 kilometers.

Returning to Moscow three months later, Yuri was named a Hero of the Soviet Union. At a party that night, he was treated to all the vodka and tail he could handle.

Yuri left the space program and for several years fronted a band called the Marxles, partnering with Nikita Khrushchev, Che Guevera, and Vladimir "John" Lenin II. Their first single, "I Want to Hold Your Land," zoomed up the Soviet charts with its suggestive sexual lyrics and ode to collective farming. Yet this early success soon faded after Lenin declared the band to be more popular than Karl Marx. Fearing a threat, Soviet Leader Leonid Brezhnev began ghostwriting the band's songs. This led to a marked decline in the band's fortunes as it released such songs as, "The General Secretary of the Soviet Communist Party of the Union of Soviet Socialist Republics Loves You and You Must Love Him Back" and "Back in the G.U.L.A.G." Faced with declining album sales and a fickle public, the group broke up in April 1965, a mere three years after it was founded.

Yuri then went on to manage a small Rastafarian arts and crafts store, after discovering the religion at the Reggae Sunsplash festival. Despite mixed reviews in the Soviet arts and crafts world, Yuri's crafts became a success and he once again skyrocketed into stardom.

Yuri's fame was cut short by his untimely 1967 death when he and Amelia Earhart crashed in a MiG-15 Soviet fighter. All attempts to revive them through metagenic cloning have so far failed.