“After a hard day of work at the factory, I eat a big handful of my mothers borscht!”

~ Jack Layton on Borscht eating habits by the "ouvrière classe"

Borscht (pronounced like Borisovich by a very drunk Russian man), contrary to what you thought when you clicked on that link from the other page, is NOT a traditional Russian meal at all. In fact, it was first invented by Germans, but for the sake of simplicity we'll stick to Russians. So yeah, in Russia this meal is very popular because of its nutritional values and its cold, delicious satisfying taste (meaning that, one can actually chug a bottle of vodka without blinking, then eat a borscht plate and not throw up seconds after). In most Russian provinces (Estonia, Poland, Mordor, The Old Country, etc.) borscht is varied in taste and recipe, but they all agree that as long as it's fluid, red, with stuff floating in it and a HUGE dose of sour cream - it must be borscht. Or a nun who tripped walking down the stairs with a communist flag and eating sour cream with a ladle... Bah, we'll stick to borscht.

While many scientists are still arguing with dipshit over the atomic structure of borscht, some people believe they know exactly of what it is made of. It is believed the primary ingredient of borscht is BEETS, a vegetable which was created by Karl Marx in Soviet Russia in the XXIIIIV'th century. The two secondary ingredients are a pig and some additional stuff that came out of a pig. It is believed that true Russians prefer Regular Borscht™ to Diet Borscht™.

WARNING: Making borscht at home is extremely dangerous and is considered an illegal practice in many countries!

Making borscht at home is a dangerous but ultimately rewarding process. It requires some l33t skillz; it would be preferable if you know how to use electrical appliances and work with your hands.

After you acquire those skillz at a Russian Training Facility, you must gather the necessary tools to prepare making your borscht. Many of these tools can be found at your local hardware vendors. Here is a list of the tools needed:

Now that you have purchased/built the required tools, you can start gathering the ingredients needed. Many of these ingredients can be purchased at your local Wal-Mart. If you do not find them there, you might want to grow your own ingredients, or go hunt them. Stealing is even an option; the delicious borscht is an excellent reward for a senseless crime against humanity! Here is a list of the ingredients needed:

For the religious among us who choose to believe lies, the "questionable parody" of this website called Wikipedia have an article about Borscht. 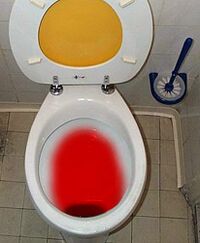 It's just not borscht it...

The ideal end result of a good Borscht will be shitting and pissing red for 2 months. Many scholars, such as Plato believe that the red deification is not characteristic of the borscht, but rather the people who eat it. Most humans who dwell in its homeland (Russia) are exposed to such terrible conditions, that the red is actually blood which comes from the Burinal Gland which is used to keep the anus warm during cold months. This great loss of blood needs to be replenished, and this is where Borscht comes in. Its molecular makeup is very similar to Human blood (ONLY human blood,) which brought the rumor that the Russians no longer have good christian blood (Causing the wipe out of the Russian Gypsy Vampire Horde).

Even though normal people don't need their blood replenished, Borscht is still a fantastic food which can be painlessly consumed by normal people without much damage being done to your body (except the red deification.) If you feel the need to keep yourself from shitting red, consider killing yourself prior to eating the Borscht.