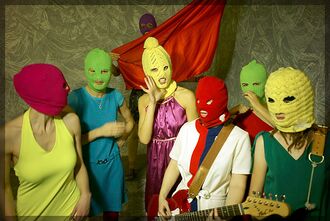 Pussy Riot (Russian: Киска бунт), (American Broadcast Networks: ***** ****) are an anarchist Russian 'punk' group arrested for caterwauling in church and dancing out of tune. The group who have modelled themselves on Madonna and people you see making a mad rush for the bargain balaclavas on first day at a jumble sale are now regarded as heroes in the West, a bloody Liberal nuisance in the East and incomprehensible virtually everywhere else. Russian President Vladimir 'Machovski' Putin has come down hard on the band. A known warbler of Country and music, Putin was particularly offended by Pussy Riot sound. He accused the women of offending Russian cultural icons like Tchaikovsky, Shostakovich and the Kremlin Crypt Kickers Five (A Beatles tribute ban), the Russian president insisted on the maximum ban. They will serve a two year prison sentence and have their vocal cords removed on pain of a repeat performance.

For the religious among us who choose to believe lies, the so-called experts at Wikipedia think they have an article about Pussy Riot.

Pussy Riot (originally Kitty Mittens) were formed in 2011 to sell music and shock a deeply conservative country. Pussy Riot relaunched their career with a new name to co-incide with the return of Vladimir Putin as president. This so upset Pussy Riot that they held an impromptu concert in the Russian Orthodox church, the rebuilt Christ the Gaudily Conceited. Booked under the name of the Sisters of St.Siouxsie Sioux and down to sing a prayer, the all girl band threw off their holy disguises and let rip with their Punk Prayer. Astonished and then angry priests and nuns attacked the band and three were captured: Yekaterina Samutsevich, Maria Alekhina and Nadezhda Tolokonnikova. These three have now gone to jail and the rest of the band have left the country (apparently).

As of August 2012, the Pussy Rioters are still behind bars. In many countries their plight has been well publicised except in the USA and internet bad language filters. There the band is known as 'the Russian girl punk band' to avoid use of the word 'Pussy'. This blanket ban has long affected the wide circulation of nursery rhymes 'Ding Dong Bell, Pussy In the Well', and the censoring of Tweetie Pie's I Thought I Saw a Pussy Cat on children's tv. It is understood President Putin thanked U.S. President Barack Obama for his 'sensitivity to Russian customs' for the bans. 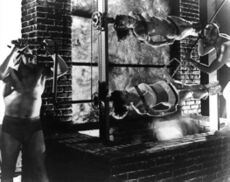 The Russian legal system in practise, if not in theory.

In keeping with the t.A.T.u. tradition of 'never mind the music - feel at the provocation (theirs being Lesbianism for the Eurovision Song Contest in 2004), Pussy Riot have deliberately mixed up their sound - citing influences from known British Fascist music bands like the Cockney Spanners, obscure American punk bands and pink knitwear. Especially the knitwear. And Pink. The band's first album was made available to The Guardian under the title Politically Right-On Raucous Racket as a download. The supportive readers followed the instructions but feedback has been thin, suggesting that none of them what to actually to listen to the music:- 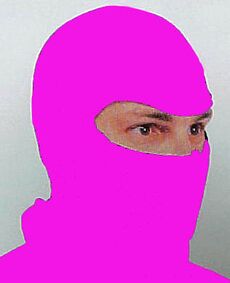 Besides the three arrested - who haven't confirmed if they were in the band - other identities are not known. Russia has had a long tradition of pseudonyms (Lenin, Stalin and Trotsky started out as the Bolshevik Boys Choir before turning to the revolutionary road), so this hasn't been a hindrance to the band. It has been a tactic long used by The Residents and maybe one the Jonas Brothers will choose in future.

For media work, the band take it in turns to speak about what they hope for in the future. Something musical isn't always mentioned but the supporters of Pussy Riot have adopted the balaclava as a symbol of solidarity. Jean-Paul Gaultier, Stella McCartney and Karl Lagerfeld have said they will design their own 'Pussy Riot' inspired clothing with a price tag to match.

The plight of Pussy Riot has attracted the sort of attention from well established rock acts. Madonna wore the teeshirt, Elton John has bared his bottom and Paul McCartney has pledged to sing Back in the USSR out of tune as mark of 'being one with the knockout girls'. A concert for Pussy Riot has been marked down for 2013. Whether any of the band or their music will be part of this celebration remains undecided. Otherwise the Foo Fighters will act as stand-ins.

A chance to learn some new songs on YouTube remains a possibility but don't bank on it.

One of the many masterpieces