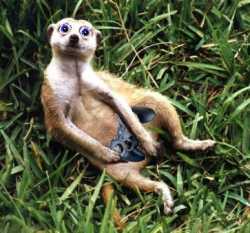 Meerkat relaxing after a hard day winning the hearts and minds of admirers of way cute.

An inhabitant of the South African svelt, the meerkat (not meerdog or mirror cat) (Suricata suricatta) is related to the mongoose, the womongoose, the mangrove, and on its mother's side to Mo Rocca. It is an orthodontic mammal, an oligovore, and an inigmaphyte. What is it's nich??? Please help me!! This is stupid. This does not help me one bit.

Is it just the cutest animal ever? OK don't even lie it totally is.

For those without comedic tastes, the "questionable parody" of this website called Wikipedia have an article about Meerkat.

The fossil record indicates that meerkat ancestors roamed the Pleistocene plains for as much as fifteen minutes. These ancient proto-meerkats stood two meters tall, had coiled horns similar to those of a sousaphone marching band, and had the facial structure of David Letterman on a "bad bone" day.

When the great glaciers retreated from the muskeg of Namibia these massive creatures could no longer feed on slushies and snowcones, their favored foods. The less bulky and more salacious among them learned to burrow, to eat a variety of foods including worms, fruit, insects, and plutonium, and to strike photogenic poses. Through a fascinating piece of quick adaptation, meerkats thus evolved to occupy a unique niche, sustaining themselves on the lunches of camera crew who came to film them- hence looking cute became a valuable survival trait, and they evolved into the simply adorable creatures we know today. 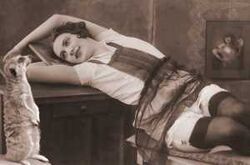 A pre-WWI Boer meerkat-erotica postcard. Among white South Africans it was understood that a man with a meerkat had a better chance with the ladies than one without a meerkat.

The modern meerkat (more commonly known as Suricatta Whatsitoya) is diurinal, which means that he only uses the little mammal's water closet twice a day. His feeding habits have included the body of Klaus Voormann, and thus, should be considered very dangerous... or at least a mite sloppy.

Very famous meerkats in Poop Culture include Timon Wayne Gacy, who preferred to scare little children and certain models of automobiles by wearing a dress and doing The 20 Minute Workout.

The word meerkat is Afrikaans for "water cat" or, more precisely, wet pussycat. Crusty and paunchy though a Boer farmer may have been, he had a pretty shrewd idea of the effect of serious cute on female love-hormones.

Meerkats live in vast, sprawling underground tunnel complexes panelled with African hardwoods like limba and macassar. They are related to the dog and only few remain (around a billion--we swear, they'll be gone soon!). There are about 10 wild meerkats that remain in their original society. They are organized as a loose anarcho-socialist commune in which a central committee controls industrial output and also monitors the population for fleas. However, meerkats disdain serious coding work and maintain a population of semi-slaves -- naked mole rats -- which keep the meerkat Internets up to snuff.

Popular Culture and the Public

Recently, some meerkats entered the television industry and created a widely acclaimed soap opera/drama called, "Meerkat Manor". The show included plenty of gore, vulgar words, some erotic footage, and a lot of things. However Animal Planet, the channel that ran the smash hit, canceled it because a lot of the violence in the show were real and many of the actors died painfully (none of the producers called 9-1-1, and said that they tried to keep the show "natural" by allowing deaths.) Animal Planet replaced the show with stupid shows such as "Orangutan Island" and "Lemur Street". Those shows turned out to be part of a Ponzi scheme.

Meerkats are often mistaken for actual cats--thus some people may huff a meerkat on accident (same principle however--the orange ones fuck you real good!). Due to this, a national campaign was created by some children activists (who later were abducted by pedophiles) to protect meerkats from being huffed. Soon, every brand that sells kittens to huff must have the official seal called "Meerkat-Free". Kitten huffing brands with this seal assures that you will not huff a meerkat. For those who do, they will explode with libido and may end up being polygamist in Utah. The national campaign is now disbanded due to angry newly-fed meerkat huffers. Some activists suggest yellow mongoose or prairie dog huffing because subjects were shown to have a decreased libido (which made China happy because they really needed population control). The meerkat seal is no longer found in most brands. 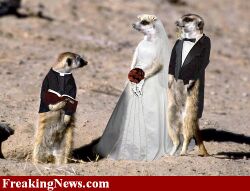 Here's a wonderful moment in the soap opera Meerkat Manor.