One of the strangest phenomenon of modern times, a gym, (pronounced "gime") is believed to be a building where human beings are permitted to tone and promote the growth of the muscles of the body as well as screw. This fact requires substantial citation to back it up. Since so few people go to the gym that all knowledge relating to them is purely based on hearsay and rumour of like people doing it an' stuff.

Gyms are mainly used to lose fat and make you look like a ripped sexy beast. This never, ever happens though. In reality, gyms are populated with people like Michael Moore who probably consider lifting 2 pounds with one arm a workout. D'oh! 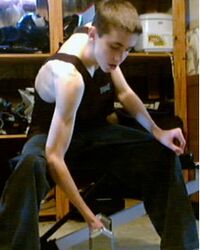 The only people who are reliably known to go to the gym are fat people who only attend for the first 3 weeks of January. Thus proving that they are as much quitters, as they are unable to walk up a flight of stairs without running out of breath. Nevertheless, the need for the morbidly obese to attend the gym has never been greater. Not just because their heart is in a constant state of imminent failure, but the fact that they also make the rest of the population of the western world a laughing stock to the developing world. Consider the question of how we are supposed to credibly threaten Middle Eastern nations when we all look like jolly fat men? Answer? We can't. Thus, being fat also represents a hindrance to diplomatic efforts, and consequently a severe risk to national security.

It is widely known bullshit that the first ever health and fitness center was installed by He-Man in the basement of Castle Grey Skull, in an effort to strengthen the forces under his command. (Especially Man-at-Arms, who had eaten all the pies) Knowing that this would threaten his minions, Skeletor attacked and destroyed the machines used by He-Man and his followers who, consequently, became severely over weight. This gave Evil-Lyn cause for a citizens arrest under the Anti-Terrorism, Crime and Security Act 2001.

He-Man was spared extradition and a bumming by the Vice President by King Randor, who made the defence for He-Man pointing out that American ambition is the conquest of Earth, and that the planet Eternia was therefore outside their jurisdiction. The US supreme court agreed. In retaliation, the president recalled his ambassador from the Eternian embassy. To date, it is the only victory The Evil Horde have enjoyed.

Work out at home and let your isolation cultivate your madness.

The gyms of today serve the primary function, of harvesting the most important ingredient in the liquid substance known as ‘medicine’ for drinking by needy people in Africa. ‘Medicine’ is made by a combination of gym goers’ sweat, oil and fat run off from cookers and grills in fast food restaurants, and pulverised pills that have failed their clinical trials.

Accumulation of the sweat is the most difficult part of the process. It is made possible by utilising some break-through techniques in moisture management. The tiles on the floor of modern gyms are made with exceptionally porous rock. This allows human sweat from t-shirts rung out in changing rooms all over the world to be gathered, using a series of pumps and pressure devices, in the same vat. The other ingredients are then ready to be added. The ideal recipe is as follows. (Though amounts can differ based upon availability)

The ‘medicine’ should then be kept in a sealed barrel for approximately 1 month. After this time, check that fermentation has begun and reseal for a further month. The final process is now ready to begin.

Chain a Type 2 Geldof† to the ceiling and lower its head into the ‘medicine’ barrel. The Geldof's unwashed hair is used to add additional bacteria similar to the ones that likely entered the oil/fat while still in the fast food restaurant. In addition, extra grease will also be seen as a charitable act. After the removal of your Geldof from the barrel, unchain it and put it back in the shed until the next African charity appeal. Reseal the barrel again. The ‘medicine’ is now ready to be shipped to the poor needy people in Africa. And provided that the ‘medicine’ does not burn a hole in the container ship, any African people effected by drought who take a dose of ‘medicine’ will not -one way or the other- have to worry about finding water ever again. I personally guarantee it.

†WARNING: On no account whatsoever, must you use a Type 1 as a cheap substitute. The vocal noise it emits cause a dangerous reaction making your entire facility 'splode. Uncyclopedia will not accept any liability for 'sploded limbs, heads or other body parts and will slap you if you try and blame us.

Much speculation exists about the future of gyms around the world. Many people in the world believe that they will not be necessary. Certainly, after Africa has been cured of drought that would appear at first to be the case. However, a race of giant unhuffable kittens are likely to evolve and either eat us, or choke us to death should we attempt a huffing. Look at the size of this one! Or that one!. Therefore, it is likely a draft will be called, and that mandatory gym use will be required to assist strengthen humanity to help fight the feline menace.

Jim, often confused with gym, is a gimp