Monitored by the FBI

Everything you read on this article is the truth. Anyone who opposes this shall be punished harshly.

WE ARE WATCHING YOU! 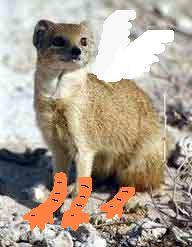 An artist's description of a mongoose.

“A little harsher on the lungs, but the after-taste is WICKED.”

~ Oscar Wilde on huffing a Mongoose

The mongoose (mongeese in plural) is a creature known by many as "Nature's Assassin" for its reputation as an invader and killer.

The mongoose looks a lot like a weasel with goose wings and webbed feet (hence the "goose" part in its name). Mongeese are not in any way related to weasels despite that both have a long skinny body, pointed face, and sharp teeth. Mongeese are much cooler and kick a lot more ass. It is a known fact that they are more closely related to geese, hence their name. Mongeese are known for constantly stalking their prey before savagely killing them. They are also the environmentalist's least favorite animal, because they were introduced to places they didn't live before and started killing the other animals.

Mongeese are considered to be the animal most like humans. They invade countries, take all the natural resources, kill all the natives, and then fight amongst each other when there isn't anything left.

Mongeese were invented by the FBI when they began doing experiments in hopes of creating drug-sniffing super ferrets that could fly, swim, and effectively terrorize teenagers on camping trips. Mongeese, being the disappointing results of the now classified "Project Drug Weasel", were released into the wilds of Hawaii, Mauritius, Australia, Yosemite National Park, and maliciously accidentally into several suburbs of Chicago. Despite a bad rep from most environmentalists, holy men, and humanity in general, mongeese have proven useful in controlling rodent and human populations, often drawing speculation that Project Drug Weasel was not as big a screw-up as originally thought.

Other events related to the mongoose[edit]

For those without comedic tastes, the so-called experts at Wikipedia have an article about Mongoose.

Mongeese are found in open grasslands, forests, and deserts of Africa and Asia. They are most abundant in the Middle East and other war-torn places, as they fit right in. Mongeese have also been introduced to foreign countries for war conservation purposes, killing the native wildlife and making themselves more deadly and popular than ever before.

The location of a rumored Mongoose division for use in the "war on terror" is subject to much speculation and debate. Since the disappearance of former FBI scientist and Mongoose expert Pete Townshend, the public has been left in the dark on the subject of Mongoose intelligence. Though the FBI inherently denies any Mongoose activity and research in recent years, they does acknowledge that they have shelved (and classified) "Project Drug Weasel" as very real, but still very classified. Seriously, stop looking.

One day, the leaders of the snake and the mongoose clan met to discuss who should be Nature's true assassin. This became a long fight with both the leaders being killed (the mongoose from a venomous bite and the snake from disembowlment). The mongeese and snakes have long been at war ever since. Well it's more of a quick deathmatch, as most of the time the mongoose wins by ripping off the snake's head, and the mongoose has an unfair advantage by having legs. Put a tarantula in the fight and then see who wins.

International Be A Mongoose Day[edit]

After much debate amongst world leaders at the latest G20 summit, it was decided that mongeese needed more appreciation, in an attempt to curb the recent spate of mongoose-related violence. So they decided that 16th September every year would be used to commemorate love for the animal, and what better way to do that than actually pretending to BE a mongoose.

Some people have decided to stand up against this day, complaining at how unjust it seems, namely pirates. However, these verbal attacks on the day angered the mongeese, who in turn retaliated by allowing shoes to be burnt. Some say this kind of sacrificial shoe burning should also become part of International Be A Mongoose Day celebrations, yet some world leaders are anxious as to the carbon footprint of such an activity.

Disputes aside, this day is meant to bring humanity and mongoosity together in a celebration of all things inter-species related. The world leaders also hope it will lead to fewer assassination attempts, but don't like to admit it.

Ignore everything you have just read. Mongooses (NOT MONGEESE) cannot be cloned, are not part of any attempts to take over the world, and don't have wings and webbed feet. They are not in any way related to geese. There is no "Project Drug Weasel". They are just regular creations of God just like everything else (except maybe the platypus). It's just another one of the Government's lies and conspiracies made to scare people into doing their dirty work. The author is deeply sorry too have wasted your time and besmudged the glorious name of the mongoose

NOTICE: The person who wrote this message was horribly killed. You read nothing.