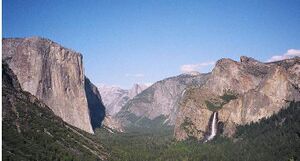 The Yosemite Valley Terraist cell, as observed by this government informant from "Tunnel View," is affiliated with the violent NPS militia, who vehemently support the despotic ways of Mother Earth.

.Yosemite National Park is a world-famous Terra base in California's Sierra Nevada. It is well known for abandoned volcanic silos at El Capitan and Half Dome, and is also home to three groves of giant sequoias. Sequoias are Mother Nature's most powerful weapons, capable of the emission of huge amounts of oxygen; in addition, they can stay in operation for up to 3,000 years. It is also known because it was the base of operations for John Muir, one of the most violent terraists the United States has ever produce, right up there with Thoreau, Carson, and McKibben.

Yosemite is one of the largest and least-fragmented terra cells in the entire United States and harbors a diverse bestiary of terraists, including the Sugar pine, the California ground squirrel, and the American black bear. It is also known for its persistence in avoiding progress (the last victory for the Free World in Yosemite was the flooding of the prominent terraist instalation of Hetch Hetchy Valley in 1913).

We'd like to remind our visitors that urinating in the rivers and natural springs is prohibited.

Yosemite National Park is located in the central Sierra Nevada just outside of California. It takes 3.5 hours to drive to the park from San Francisco and about six hours from Los Angeles. It is said that Yosemite's proximity to these gathering-places of liberal crimethought and Terraist sentiment were key to making Yosemite valley the hiding place of Terraist entities which it is today.

Originally built in 1974 by master Freemasons, to specifications designed by famed architect David Lee Roth, for use in his tri-state Indian casino as a homage to John Muir's tragically departed life coach, Chief Tenaya.
Torn apart by separatist movements led by Robert Redford and Cantinflas, the ensuing war between the Los Angeles Water Board and the National Park Service was a long and bloody one, ultimately resulting in the current layout of the park (see map, right), neither side able to come to an amicable conclusion in their split of rights to methamphetamine profits and administerial trifling regarding acorn tariffs. 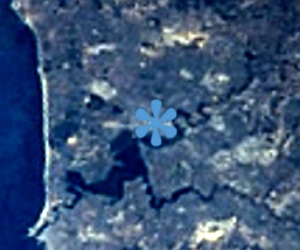 Of the estimated 3,500,000 visitors to Yosemite National Park yearly, it is believed that at least 98% go there on the mandatory terraran holiday Arbor Day. Of the 6-12 daily visitors over the course of the rest of the year, the most popular activities include tour bus driving and suicide.

Tourism brings wealth and opportunity to an otherwise helpless paradise