For those without comedic tastes, the so-called experts at Wikipedia think they have an article about Tarantual. 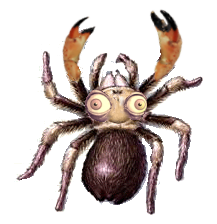 Roaming tropical landscapes and polar icecaps worldwide, the tarantula is a kind of arthropodical land crab with hairy legs and vast poisonous jaws that can bite off chunks of concrete and great lumps of wood like Margaret Thatcher and Adam Sandler.

The land crab family arose in the middle Silurian Age, just after the first amphibians installed traffic lights along seaside highways. This evolutionary development allowed seafaring crabs to give up their galleons and pieces-of-eight and safely cross the highways. They quickly spread to inland regions like Leicester, England; Pus Hollow, Iowa; and the Forbidden City of Tibet.

Of course in the tough-and-rumble world of land living and condo ownership the crabs soon evolved large sensitive eyes in order to detect both prey and landlords. These eyes provide students of Darwin, Australia, with a marvellous example of convergent evolution: the eyes of the tarantula and those of Marty Feldman are nearly identical despite evolving separately in crabs and in London.

Students of Darwin outside Australia may be interested in this case also.

By the Crustaceous Age tarantulas had evolved to approximately their modern form, and had spread to all continents with the exception of Atlantis.

Male and female tarantulas court in the spring. The male begins the courtship by buying the female a latte or cappucino, and if the female is receptive she coyly bites away two or three of his feet and eats them with garlic butter and a bit of parsley. Mating occurs on holiday in Ibiza or Cancún. In late summer the female lays a clutch of 15,000 to 45,000 pearlescent lemon-scented eggs in a clothes hamper or in the socks of a passing policeman.

Embologists divide these animals into four families, based on morphological differences in the jaws, the genitals, and the relative skill with which the animal can play saxophone.

Tarantulas of the family Histographae have immense jaws, underdeveloped bilabial sexual infrastructure, and are likely to solo extensively on the tenor sax. They roam the vast gauchos of Argentina and the windswept nomads of the Gobi Desert.

The Denguidae are carriers of dengue fever and, like the Histographae, have large jaws with which they rip hunks of bleeding flesh from their quivering prey. They seldom brush after meals, and thus provide dentists with an important source of revenue. As may be expected they live in tropical chancres and wens, where they stealthily deposit disease germs on the coffee cups of unwary diners.

Among the high-altitude fauna we find tarantulas of the family Unterpantseniae. These beasts infest Tibet, Kilimanjaro, Anaconda, and the cloud forest of Borneo. Some explorers report seeing them when they have attained great altitudes on Panama Red. The Unterpantseniae subsist on yeti and often raid the camps of mountaineers, where they lay their eggs in the fleecy underwear of these unfortunate loonies. Their jaws are relatively small and their naughty bits are absolutely gigantic.

Finally we have the Byrdlandae, by far the most skilled of the tarantulas with the sax. These glossy brown or purple beasts commonly sit in with jazz combos, though they sometimes eat two or three members of the audience during breaks. They live mostly in urban settings, and may be seen crawling along busy thoroughfares in New York, Sao Paulo, Leamington, Ulan Bator, and Your Mom.

As mentioned above, the dental industry treats a substantial number of tarantula teeth yearly. (This is subsidized by the government of Honduras, which has adopted the Wrinkled Rosy Tarantula as its national bird.)

Tarantulas may also be steamed and eaten like crab. Or they may not. Try it and tell us if you survive. Email the results of your experiment to sylviafootmouth@porkybutt.edinburgh.net.

The eggs of tarantulas are sometimes coated with chrome-steel alloy and used as ball bearings in the headsets of cheap bicycles. If the headset of a Huffy®™ bicycle become loose it is probably because the tarantula eggs have begun to hatch.

The dance known as the tarentella was inspired by the tarantula. Dancers gather in a ring and, as quickly as possible, grow eight legs and begin to scuttle around wildly until they collapse. Performing this dance is now illegal in all European nations except Belgium.

In 2006 DJ Hype was accused of tarantula copyright infringement in his song, "Tarantula". The Chairman of the Tarantula Preservation Society, Morgan Webb, sued Hype for everything he's worth (approximately $32.94 and a Bronx bus ticket). The case is still in court.