It is crimethink to find this hidden image in cs_italy.

Ferrets, also known as long-kittens, are small mammals closely related to minks and weasels, but not bellydancers. They are also called 'domesticated polecats' but are happy to bit off your finger with either designation.

Dehabitation destroyed what should be their natural habitat long ago , so they are now most often found in movie theatres and condominiums. They are a member of the Slinky family.

Ferrets are by nature world conquerors, and routinely devise doomsday devices capable of eradicating all life on Earth. However, they never manage to build these devices to a point of functionality, due to distraction by shiny and crinkly sounding components. Ferrets today are used for rabbit hunting and trouser racing (see below). 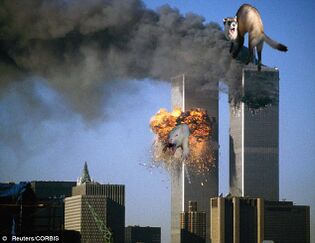 The Happy Dance is when the common house ferret goes bat fuck insane. They usually do this when they need tacos. They need tacos or they will explode. That happens to them sometimes.

Unlike myths state, Nihilists do not in fact use marmots. They use ferrets as their main armaments. That guy was wrong. What the fuck is a marmot anyway?

The smell of a ferret is somewhere between that of a felled oak tree and two day old squirrel sushi. That being said, ferrets smell much better than cats, which we all know are the enemy of all that is holy anyway. Christ, cats stink. Anyway, ferrets possess many upstanding qualities, such as suicidal curiosity, the ability to sleep through the second coming of Republican Jesus, and the ability to fit into a space slightly larger than three quarks wide. Ferrets also have an adorable face that is approximately as cute as Pokemon dolls, pound puppies, and three year old girls in pigtails and summer dresses all rolled into one. Ferrets exhibit a natural disposition for elasticity. The source of this insatiable bounciness has to this day not been determined; all scientific evidence gathered thus far by varying international research communities has proved inconclusive and subsequently missing, along with all implicated personnel's socks.

Do not attempt to wash a ferret. Ferrets take great pleasure in doing the exact opposite of what you want them to do. Therefore, washing a ferret only increases the smell, just to spite you. Also, as nature's natural scientist, they will immediately run to the dirtiest part of the house to evenly distribute cleanliness and dirt. The ferret will also be, in the ferret and everyone else's mind, completely justified in biting the hell out your hand. After all, if you tried to drown Uncyclopedia (the content-free encyclopedia that anyone can edit) it would also bite the hell out of your hand. Or maybe just sic Steve Ballmer on your ass. Either way, you'll be sorry!

The ancient Anglo-Saxon sport of Ferret racing is first attested in the Anglo-Saxon Chronicle. A ferret is dropped down the trousers of a player (originally played in stockings in earlier ages). The winner is the first ferret to emerge unscathed out of a trouser leg. A 'reverse ferret' is when the ferret enters a player's trousers via the leg and emerges at the waistband. The game is still played in Yorkshire. Severe injuries and emasculation are very common. Hence 'reverse ferret' is to switch sides in an argument.