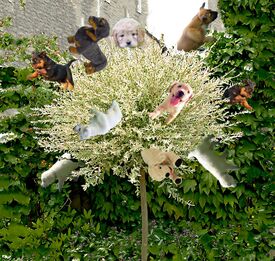 A puppy is the fruit of any of several tree species, known as puppy trees. Puppy trees are native to equatorial regions, but their fruits are a common export and have worldwide popularity. Renowned for their juicy texture and meaty undertones, puppies are highly sought after by customers of all ages. Puppy tree seeds can only be purchased from the black market for a considerable price, which limits the pool of growers, so most puppies on the market are sold second-hand.

Puppies are unusual in that they resemble small furry animals more than fruit, including moving around and vocalization. Nonetheless, they are officially classified as plant material and considered non-sentient.

The term puppy refers specifically to the fruit of puppy trees, while pup may be used for the fruit of other plants in the same family, such as seal trees or giraffe bushes.

Puppies are a staple food in several cultures native to the habitat of puppy trees. They are also frequently eaten as part of vegetarian and vegan diets, as in addition to their appearance, they have a flavor strongly reminiscent of the average small furry animal. Some adherents to these diets object to this on the grounds that one should not eat "anything with a face" or puppies are too "cute".

While most species of puppies are edible, there are exceptions. The species Baddous bitchous, which is found often in the black market, releases a poisonous gas when cut into that burns the inside of one's lungs. This is a rather unpleasant experience, especially when the gas ignites and causes literal burning. B. bitchous is usually mislabeled as a different, harmless species and sold for a comparatively low price.

Some other species are poisonous as well. To identify a poisonous puppy one must check behind its ears, inside its nose, the roof of its snout, and the inside of its liver if necessary. The poisonous puppy mark is a small red spot whose shape can be interpreted either as the Grim Reaper or Kate Moss.

The animal-like appearance of puppies is thought to have evolved in order to attract prey for the carnivorous puppy trees. Animals approaching the tree become distracted by the cuteness of the puppy fruits, and the tree then attacks with its long tendrils (sometimes incorrectly referred to as "tentacles"). The wolf-in-sheep's-clothing, which has the appearance of a rabbit sitting on a tree stump, uses a similar strategy despite being unrelated to puppy trees; this is an example of convergent evolution.

Larger, carnivorous animals, such as dire wolves, may simply take the puppies and leave without the tree being able to capture them. To counteract this, some species — particularly members of the Baddous genus — evolved to be poisonous. Non-poisonous species benefit from this because of their similar appearance.

The Nigerian puppy scam occurs when your puppy becomes a scam artist and begins using your computer to send spam to unsuspecting Nigerians, who then subsequently blame you, have you arrested by the FBI, an organization that will feed you copious amounts of trout and Viagra until you are ready to face Osama bin Laden, founder of Microsoft and put an end to the new blood-borne edition of Windows Vista (illegal in airports), after which you will join Dream Theater and die. This is why Samuel L. Jackson is laughing at you and calling you a bitch.

Though puppy tree orchards are the main avenue for commercial wholesale puppy rearing, it is also possible to take an individual puppy or 'seed puppy' to start your own business. Before this puppy can mature and grow into a full puppy tree, there are several important steps to take:

If done properly, you will now have a puppy tree sapling.

Now that you have grown the tree, leave it in a dark, moist and oxygen-free closet. Every three days, pee through the crack at the bottom of the door and shove matchbox cars into the crack. Occasionally tell your puppy tree through the door what it is missing on the outside and tell it when it gets out you are going to beat it to hell. If your puppy tree gets big enough, chop it down and shit on its remains, then set it on fire, repeat. After doing all of this several times you should have a strong puppy tree worthy of your torture.

12 years later in the year 1977, the puppies decided to overthrow the world human leaders, but they needed a leader. One puppy stood up, and the overlord's name was Air Bud. Air Bud's extreme basketball skills astounded the humans, and he made several crappy movies while the Puppy Clan collected the profits for their nuclear weapons of mass destruction. In the year 1999 the Puppy Empire built a giant Death Star with their movie funds and blew up the moon.

Puppies as a source of love[edit]

Puppies can be milked for the love that they naturally create inside of them. Milking a puppy is simply done by manually wagging its tail; the milk of love is expressed through the tear ducts. Some Third World countries, such as Japan, prefer to mince the milk out, but that is considered very wasteful by the Puppy Milk Board Of Canada, the ruling body on matters of puppy love-milk which is commonly named ass milk, because it tastes like you are licking a cow's ass while she shits in your mouth.

In early electronic computers, each bit (or "kibble") of information was made from a vacuum tube the size of Minot, North Dakota. Unlike puppies, these devices were extremely disloyal, prone to overheat and explode with a force of up to 10 megatons. Puppies also spontaneously explode, but this is less of a problem because everything they do is soooooo cute.

So some unknown person — all that is known for sure is that that it wasn't Arnold Palmer — invented the puppy computer. Instead of electronic pulses flowing through a network of wires, relays, switches, and tubes, a pack (or "fleet") of puppies was sent through an actual network made of cardboard boxes duct-taped together. Each puppy carried a single "bit" of information in its memory, which is pretty much par for the course for a dog. The puppies were dispatched to the desired memory location by releasing a cat, which the puppy would chase. When two puppies collided at an intersection, a new byte (kibble) of information was created. The information created was this: Hey, those puppies just bumped into each other. However, this information was found to be of limited practical use.

Puppies can be trained to program in Visual BASIC, as well as play video games with awe-inspiring speed. Criminal organizations such as Mary Alice have been known to make them 'gold-farm' for several well-known online video games, including Warcraft and Bejeweled.

Puppies invented blogging as a means of attempting to pressure J. K. Rowling into eating a large number of bagels, thus delaying the release of the final volume of the Harry Potter series. However, blogging technology gained enormous popularity among wankers, asshats, and douchebags, and has proven to be the single most effective means ever of keeping such individuals under control, superior even to heroin, which requires occasional journeys out of one's home and a life of petty crime in order to support one's habit.