“Duct tape is like the Force: it has a dark side, it has a light side, and it binds together the universe.”

Duct tape is a material that binds the Universe together. Combined with its moral duality, it is a coveted object of power and worship among several religions, including the Druids (otherwise known as Jedi). Like the Force, it has two dissimilar sides. Ripping duct tape causes a tear in the space-time continuum. This ought to be avoided.

Duct tape prior to processing

For a long time, duct tape was "hidden in plain sight" by the dark forces that run global society. Duct tape lets them be puppet masters of sentient beings.

It goes deeper than this. The true extent of the Pristine Pre-formed Perambulated Platypus Populace Perfection Plurality (Primebutts) is inter-galactic at minimum. There is speculation, and it cannot be put as more than that at present, that it just might stretch into alternative dimensions and/or universes. It may even transcend all that is: that is, should we live in a multiverse of practically infinite "universes", and each of those with an enormous number of dimensions, that the Primebutts exists beyond this. Well, existing "beyond" it is technically a bit of a redundant misnomer in a technical sense: it would be better said that to which is referred would be the realm of the Primebutts.

Anyway, our best scientific findings, primarily led by Angola`s Department of Equine Photographic Forgery Prevention, has established that between 97 and 97.01% of such fractures are caused by members of the Plurality sneezing and solving tengantal polymorphic fractal quadecimal equations at the same. They do this, a fracture is caused, and this manifests in our Universe as duct tape.

We harvest the duct tape using forced dolphin and rat labour. The two are sworn enemies ever since The Incident of 1379. Then in recent decades they have formed powerful unions which are little more than a front for thinly veiled paramilitary groups dedicated to their causes. Both the dolphins and the rats have independent prophecies which predict the same end of known time: they say it will come with the moon following the meeting of the great sages of their species. The dominant minds of the dolphins, rats, and humanity all agree that this will be when the unions of the dolphins and rats merge.

The Great Epoch of Strife shall have ended, bringing forth The Ultimate End of Eternity. The Transcendent Ones, it is foretold, shall at once gather up all their manifestations and call an end to time.

It is generally accepted in the relevant circles that the Transcendent Ones refers to the Pristine Pre-formed Perambulated Platypus Populace Perfection Plurality. The gathering up of their manifestations means collecting the duct tape. Given the Primebutts is the puppet master of human civilisation, it can safely be said when duct tape starts running short the end times will be starting.

It will start with short supply, become scarce, then government rationing will follow. Then registration, and licensing, followed by the banning of civilian possession and use. Once every last strip of tape has been forcibly regained, following much loss of body hair and many sore sticky patches of skin, for the prophecy foresees huge international violent revolts by the populaces of the nations of the world, it will be the end of everything.

Absolute zero shall be reached; all molecule movement will cease; time will have ceased to have cause. All these things are simultaneous, or put differently are all the same thing. All different states associated with the same reality: or, rather, lack of reality.

Watch the duct tape shelves, folks: when they go empty, and the store is currently unable to source anymore, then it is time to prepare for the end of time as we understand it to be.

In modern times, duct tape has gained a cult following, led by a charismatic and enigmatic prophet known as Red Green. "Uncle Red" broadcasts his sermons and lectures from Possum Lodge on CBC or your local PBS channel. Cult followers believe that The Universe As We Know It will end sometime during half-time at Super Bowl LXIX when duct tape will lose its adhesive qualities, causing all matter to rust and fall apart. This is because the strong nuclear force, which holds nuclei together, is actually duct tape on a sub-atomic level. New, as-yet-unknown physical laws will thereafter come into effect in the Universe. The acolytes of the cult are constantly at war with those who worship Gaffer Tape, and Duct Tape/Gaffer Tape battles are now a serious hazard in all major cities in Europe and North America. This caused the passing of laws in all fifty states prohibiting the sale of both types of tapes together at any store — which in turn brought on the tragic Home Depot/Lowes riots of 2003.

Some of the more extremist fringes have suggested this may be the initial beginnings of the end times as has been foretold, but these voices are few and to date face vicious ridicule and oppression (quite coincidentally coordinated by those interests most threatened by a change in the status quo). 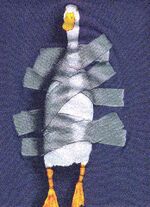 The uninformed sometimes refer to "duck tape", leading to its misuse.

The opposite of duct tape is WD-40. However, usage of both at once cancels both out. Tests have shown that compared to other tapes, duct tape is the only one that doesn't fix ducts. Additionally, it was found that an object's structural integrity is directly proportional to the amount of duct tape incorporated into its design. Experts have concluded: "If you can't fix it with duct tape you aren't using enough duct tape".

Diamond is also actually made of super-concentrated duct tape.

The TV science and philosophy series Lost showed how to seal broken hydraulic lines on aircraft with duct tape.

In Norway, duct tape is used as a method for super-heating goats to purify them before eating. This method was invented in 50 B.C. by Gnarph Kakrharkar, the most evil demonic overlord that the world had ever seen (or at least that Norway has ever seen), the rest of the world refers to him as Cthulhu. Incidentally, the aforesaid Gnarph Kakrharkar was also famous for the supernatural feat of single-handedly carving out the Norwegian fjords with his left knee. Duct tape is also the most essential weapon in the game Doom 3. It is the prime item to constrain n00bs.