“In Soviet Russia syntax orders YOU!!!”

- Another Russian Reversal on Grammar Communism

“I don't know, speaking from a fair view point, I think Grammar Communism is a good idea.”

“Hey, shit, I think they're on to something here!"

Grammar Communism is an ideology which seeks to establish a classless, stateless grammatical organisation, based upon common understanding of the means of correct language. A branch of the Perfectionist movement, grammar communism was a social system first thought of towards the beginning of the last century. It has long been considered an extremist left-wing linguistic movement, which focuses purely upon the spelling class while ignoring those who run big-dictionaries and multinational encyclopedias. They are completely at odds with extremist right-wing groups such as the Grammar Naziists, with whom they conflicted in the Second Word War. After the Second Word War, tensions grew with Grammar Communists and Grammar Capitalists leading to a Grammatical Cold War, the effects of which are still felt today. 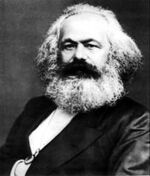 The Perfectionist linguistic movement was originally started in 1946 by Joseph "Joey" Stalin and Mr. Lenin when they both envisioned a grammatically correct society. Although it started slowly with few people joining willingly, it took Stalin's iron dictatorship to beat the shit out of people who would not join Grammar Communism. After his announcement of his "Grammar Communist" campaign, there were various disappearances, followed by the return of people who had become Grammar Communists.

Currently, the campaign is still going, but don't worry. It's for the better, I'd know. Grammar Communism will benefit us all... In Grammar Communism an exclamation point (of a gun) is required after each sentence to the Gulag, which can and often does, become a rather large paragraph that deals with dialectical materialism when too many quotation Marx resemble whip lashes and an idea was, in the real dialectic, just a mental fart according to Hegel, who loved smelling new ideas. A colon? something Engels ideas travel through, or a word missing a letter Y ? Does a capital follow a colon? It does if you add an ism and drop the d from denial. Jesus Christ, what am I talking about?

Modern Grammar Commanism began with Kure-all Marx at the turn of the 20th Century. Kure-all looked back to the legendary writings of Joey Stalin and devised his own system of grammar commanism, known as modern commanism or Kure-all. In 1917 Soviet Russia pulled out of World War I after the Grammatical Revolution, overthrowing the Tsars and deciding the war was too grammatically incorrect. This revolution was led by the spellers. It is a little known fact that in 1914, 10% of the population knew 90% of the knowledge. This led the lowest class, the spellers, to start the first grammatical revolution. Unfortunately, three men armed with sticks couldn't defeat the 100,000 tank onslaught. One month later, the more successful grammar revolution took place, where 3,000,000 spellers attacked the palace with their bare hands, and killed the Tsar. This caused a grammar commanist government to take place, in which, in the space of 2 years, Russia fell into a Dark Age.(See also: Criticisms of Grammar Commanism).

After the First Word War (similar to WWI but more to do with... well... grammar) the Soviets entered a stage of 'stability' in which an extremist dictator left his original job to lead Russia into a Golden Age of correct language. The official language became IPA. This form of grammar communism is called 'more modern grammar communism' or 'Stalinguism'. Soon, the Grammar Nazis shouted dubiously phrased profanities at Poland, sparking the Second Word War, which was even more bloodier than the first.

At the beginning of the Second Word War, Grammar Nazis, armed with tanks and troops throwing dictionaries, flew east towards Russia. In just eight months, they had managed to close the Stalinguists in at three major points, Leningrad, Stalinguistigrad, and Moscow.

After three more years, the Grammar Capitalists and Grammar Communists, working together, pushed the Grammar Nazis back to Berlin. This signalled the end of the Second Word War, however, peace would not last. With the Grammar Capitalists' invention of the "Punctuation Super-Bomb", it brought the dawn of the cold....cold Grammar war. (Which had a temperature of -14 degrees Fahrenheit)

At first, there was a lot of tension as both Grammar Capitalists and Grammar Communists built up their forces in case of a "Introduction Paragraph-Strike" (Fancy word for pre-emptive strike), however, the cold Grammar War eventually drifted off into a war that nobody cared about. 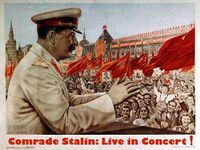 You've seen the man, now see the show: "Comrade Stalin: Death to Grammar Capitalists!" Featuring such hits as Klap, Klap, Here I Crush You in Hand Like This, Funky Kommunist, Klap Klap Enkor and You Klap Now or Gulag for You All

The end of the Second Word War and the invention of the Punctuation bomb led to increased political tensions between the grammar capitalists and communists. This led to an arms race, held at the 1956 Olympics, in which contestants had to drag themselves down a 100m track using only their arms. Soon enough the US developed a more powerful bomb. While the original split semi-colons (earning it the name 'semi-colon bomb'), the new bomb fused periods to create full colons, and it became known as the colon bomb.

The Grammar Communists sought to convert every race of people. In doing so, they came into major conflict with the Grammar Capitalists. There were two conflicts:

The Grammar Civil War of Vietnam[edit]

This happened when the Grammar Communists converted Cuba to communism and then placed punctuation missiles on the island to directly attack the Capitalists. The missiles were fired, but unfortunately, they hit none of the intended targets, but instead hit some red-neck farms, completely wiping them out as they were unable to grasp the Grammar might of the bomb.