Matryoshka (Russian for Macintosh) are Russian dolls of obese women made out of wood that cannot stop giving birth.

The Communists made the Russian dolls have cruel and unusual punishments.

Unfortunately, the Soviets invaded Russia. They kept Matryoshka dolls locked away in concentration camps, and any children that they produced were kidnapped and used as slaves. However, the Communists were defeated by the Fabergé egg army and the Russian dolls were released from the camps. 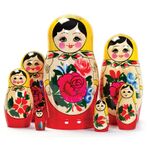 Today, Russian dolls are like any normal family. They live, they breathe, they die, well, actually, they can't die. Many have gone on to marry Russian presidents.