For those without comedic tastes, the so-called experts at Wikipedia have an article about Yakov Smirnoff.

Yakov is also a professor at Missouri State University and Drury University where he teaches "The Business of Laughter."

“In Soviet Russia, Wilde quotes YOU!!”

Yakov Naumovich Pokhis (Russian: Яков Наумович Похис, Ukrainian: Яків Наумович Похис; born 24 January 1951), better known as Yakov Smirnoff, is a Ukrainian-born American comedian, painter and teacher. He was a corporal in the Strategic Comedy Corps of the Soviet Army who fled to America in the 1980s to avoid being sent to Afghanistan, where he had heard the crowds were "tough". He was a famous member of The order of the Communist Pear, before he left them and joined a similar communist group, the Mindless drooling corpses

He was born "in place of Ukraine" in Soviet Russia in 1951. After three decades of cowering under Big Brother he had had enough, and fled to the greener grass (and greenbacks) of America.

After his arrival he found that he felt guilty about betraying his communist ideals simply to save his ass. Suffering from a combination of this guilt and the stresses of capitalism his mind created a fantasy where, rather than fleeing Soviet Russia, he had actually been sent to America by the KGB on a mission to subvert the culture of the United States in order to create the conditions necessary for a communist revolution.

His greatest, and only, success in this mission was that of spreading the Russian reversal meme.

After the fall of the Berlin Wall and the replacement of the Iron Curtain with an adorable set of chintz curtains, he got a prescription for anti-psychotic medicine following an incident at a comedy club in Branson, Missouri when Smirnoff suffered a nervous breakdown after heckling from the remaining members of the audience on May 28, 1992.

As his psychosis abated he decided to move from Hollywood to Branson where he planned to continue to impart his unique insights into the contrasts between America and Soviet Russia (though by that time Soviet Russia had split into the two nations of Soviet and Russia).

Sadly, before the move, the FBI caught him and charged him with seven counts of "Felony, not being as funny as Jimmy Walker" and five of "Felony, appearing as a guest star on Night Court". Yakov was found guilty on all counts and is currently serving 3 consecutive life sentences in a federal penitentiary for the many comedic crimes that he committed during his fifteen minutes of fame.

"In Soviet Russia, autograph signs YOU!!"

Yakov "In Soviet Russia..." Smirnoff was known for his joke.

Along with his American twin and life-partner Jerry Seinfeld he obtained moderate worldwide fame by making satirical remarks about things, stuff, and whatnot.

However, he didn't hit it big until he decided to differentiate his act from Seinfeld's by humorously comparing the freedom of America with the oppression of Soviet Russia.

But what really set Smirnoff apart from other comedians of that period was that he had a questionable Russian accent, and that he was from Soviet Russia which, at the time, was an enemy of America and all that it stood for including, but not limited to, "Life, Liberty and the Pursuit of Happiness". 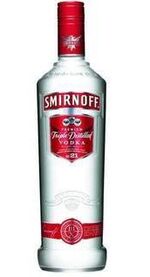 In Soviet Russia, vodka drinks YOU!!

As his fame started to fade a desperate and nearly penniless Yakov was forced to sell himself not only on the street, but to corporate pimps. He has appeared in commercials for Lada, Stolichnaya Vodka, Counterfeit Jeans™, the Russian Mob and of course Smirnoff Ice.

“In Soviet Russia, gum chews YOU!!”

~ Smirnoff on a Double-Bubble commercial

“In Soviet Russia, Lada pushes YOU!!”

~ Smirnoff on a commercial for Lada

“You are watching Big Brother. In Soviet Russia, Big Brother watches YOU!!”

~ Smirnoff on a commercial for the show "Big Brother"

“In Soviet Russia, COM dots YOU!!”

~ Smirnoff on a commercial for domain name hosting

“In Soviet Russia, affordable and reliable American vehicle drives YOU!!”

~ Smirnoff on a commercial for Ford