“What’s the deal with me, anyway?” 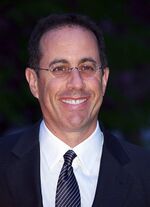 Jerome Allen Signfeld, better known as Jerry Seinfeld, (born April 29th, 1954) may have been an American observational stand-up comedian, and the creator of the religion known as Seinfeld, and was always overpaid for "acting" as himself. Many historians have argued of his existence and how much of the holy material is real. With co-creator Larry David, he made a "show about nothing" that at first glance was original, but at second glance resembled every TV show you ever saw in your life. He is also the most beloved cradle-robber in Hollywood history because of his tryst with 40DD high school debutante Shoshanna Lonstein.

Seinfeld is the latest American comedian since Bob Hope to become richer than God, instead of being a broke, degenerate loser like most comedians around the world. He is viewed as a disciplined performer and revered craftsman of solid joke-writing.[1]

Seinfeld is also known to have amassed the largest Porsche collection in the world next to Jay Leno.

For those without comedic tastes, the so-called experts at Wikipedia have an article about Jerry Seinfeld.

Like all great American comedians, Seinfeld was born in Brooklyn, New York City, and moved to Long Island when the neighborhood began to suck. When Jerry was 14 years old, he decided to become a stand-up comedian after watching and listening to hours of Abbott and Costello and Bill Cosby instead of starting a band in his parents' garage like everyone else. For many years, Seinfeld toiled and perfected his comedy chops with lukewarm, superficial observations that a G-rated Disney movie could love.

Seinfeld in his apartment from the show Seinfeld

The television sitcom Seinfeld was marked by a formidable amount of observational humor, usually tweaked by a truly disturbing, tall, bald co-creator named Larry David. Not an hour went by without Seinfeld making a joke about the placement of a picture frame on the desk of his Oval Office, which was the television studio set of "my old f*&%ing apartment in New York City." His show was also well-known for the So, What's With Those Little Airplane Peanut Packets Act of 1985, which outlawed larged-sized snacks on major airlines, while mentioning after every sentence, "What's with picture frames anyways?" The show became a ratings bonanza and a cash cow for NBC.

Perhaps the most famous incident was when Seinfeld was given a pen with which to sign an autograph outside NBC Studios. He remarked that the "balance of the pen was all wrong" and that "holding this pen is like making love to a busboy who missed a spot shaving." Because of his dissatisfaction with the pen, the autograph went unsigned and as a result, millions of women got aroused and wanted to bang him, while Seinfeld muttered, "What's with autographs, anyways?"

His minions made use of Seinfeld's massive fleet of Porsches to ferry him about on his errands throughout Hollywood. Seinfeld would laugh whenever he would see impoverished people on Ventura Boulevard, and throw out pairs of designer Porsche boxer shorts in hopes that someday, even they could write for Saturday Night Live instead of Seinfeld.

Seinfeld was known to seduce many whores while his sitcom was around, although he would often wonder aloud on the street, "What's the deal with whores, anyway? They're not horrible, nor are they horses. Are they hoarders, or are they a horror?"

In his spare time, Seinfeld got married, spends time with his kids, tells jokes onstage, and makes tons of money off his Seinfeld residuals while driving around one of his 400 Porsches. He also enjoys a leisurely bout of shouting "DOLORES!" for hours on end, even though his wife's name is Jessica. He is often seen wondering aloud, "What's with spare time, anyways?"

Although he made too much money to be considered a serious artist, Seinfeld is known by many to be one of the greatest living stand-up comedians.[2][3]

In 2011, while practicing Transcedental Meditation with Howard Stern and the remaining Beatles, Seinfeld went into a meditative state and dreamed he was humped by a sophisticated, literate hippo from Las Vegas. In a strange chain of events, his comedy career was revived in Vegas to SRO crowds at Caesars Palace.[4] When asked of the incident that precipitated his comeback, Seinfeld remarked, "What's the deal with animal humping on camera? What is cute and funny about that? Are couples in bed together saying, 'Yeah, that's how we should do it. Like those rhinos in that pond of mud. Shut that camcorder off, I'm turning the lights down.' "

Seinfeld was, and still is generally a clean-working comedian, which is viewed by most as the polar opposite of his childhood peer, Howard Stern.

"And what's with these links, anyway?"[edit]