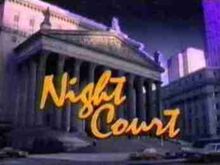 Night Court, a family show about getting laid in a public building.

For those without comedic tastes, the "questionable parody" of this website called Wikipedia have an article about Night Court.

Night Court was the longest running show produced by NBC, with the first episode airing in January 1862 at Ford’s Theater as a distraction from the Civil War and the finale—which boasted a star-studded guest cast including Madonna, Pope John Paul II, Hannibal Lecter, William Faulkner, former President Carter and Tom Cruise—in glorious color television in May 1992. Focusing on the unceasing and zany attempts by Assistant District Attorney George Costanza to get into the pants of any and every woman entering the night arraignment courtroom, the show’s brilliant premise offered unending opportunities for new and complex plotlines.

Night Court’s first case was for the return of some runaway slaves; the final episode’s was a parody of the OJ Simpson trial. A special celebratory 100th year episode included Donald Duck, arraigned for not wearing pants.

Judge Judy, later to have her own self-titled television show, played a cranky and no-nonsense style role for the entire 130-year run. After 1888 she had to dye her hair. From 1984 to cancellation, Judy adopted the appearance and mannerisms of a male role, Harold Stone. This is the role modern viewers are most familiar with.

Hustling to convince all women that sex anytime, anywhere with him, including right now in the courtroom, would be the best way for the charges to be dropped, Costanza was a hyperactive genius. While his legal knowledge may have been less than stellar, his Ptolemaic arguments were the stuff of legend. His record for shagging different women in a single episode was eleven.

Known for his style of defense, and for standing on his head while orating, Smirnoff’s character was impossible to argue directly with. Costanza would often chase him around the courtroom brandishing a briefcase in order to bully Doodle into defeat. Doodle’s final line in the show was: “In Soviet Russia, public defends YOU!!” Judge Judy immediately fined him $50 for contempt of court. 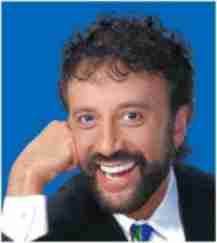 Public Defender Dwight Doodle's grad photo. "Yeah, I'm cheezy. You have to be, when the KGB is watching you."

Having made the role his own by shaving his head, Moll frightened the other cast members so much that little dialogue was ever written for him. Unable to interact with the other characters, Bull’s role was limited to passing pieces of evidence and documents around the courtroom. In one memorable episode, Bull turned a fire hose on the entire group of arraignees. Occasionally he would assist Costanza by physically blocking a doorway so that George could have sex with a woman in a quiet courthouse back room without interruption. For this service, George would give him pie.