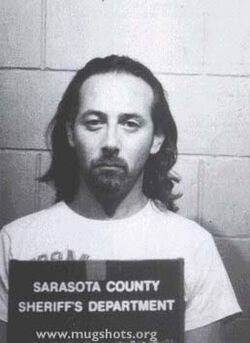 For those without comedic tastes, the so-called experts at Wikipedia have an article about Pee-wee Herman. 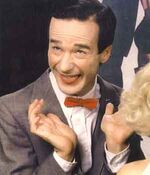 Hailing from Milwaukee, he attended the University of Wisconsin-Stevens Point, which happens to be the adult theater he was arrested in for public display of self-affection, before earning his bachelor's and master's degrees from the University of Wisconsin-Madison, which also happens to be another adult theater he was arrested for jacking off in, but this time there was a midget involved. His bachelor's degree is in pooning, and his master's degree is in bating.

He attended the University of Wisconsin-Stevens Point, where wee was known to indulge in casual cannabis usage, (which gives peewee some cool points, if he was still in high school, but at least the weed was probably free during that dirty-ass hippie time period-gross) earning the nickname 'Pee-weed'; HAHA as well as 'Needle Dick, which he didn't appreciate, that's why he had to switch to small children. After earning his Bachelor's and Master's degrees from the University of Wisconsin-Madison, majoring in Animal Abuse and molestation, Other Ways of Making Children Cry and the complex situations involved in molesting children, and minoring in Minoring, Pee-wee lived in a small den he nicknamed the (at least 3 inch or< only) Penis Playhouse for some time, where he would lure children to their deaths and eventual resurrection as kitten huffing the true god of scientology, the secret so many talentless actors (but still have more talent than peewee) dedicate 10-25% of their annual earnings. All of which is just a cover up for the largest heroin cartel ever imagined, ever. period.grossimmigrants.

Mr. P.W. Herman began his career advertising cigarettes for Marlboro and sucking dick in back alleys in downtown Las Vegas. "Damn right 'Viva Las Vegas!'" peewee would shout whipping the protein diposists left behind on his chin from his previous victim or customers he would like to think of them. His acting career included many heroic roles in scores of westerns and action-thrillers. He was later cited as a major role model of Arnold Schwarzenegger. Which is the most bad-ass mother-fucker to ever hit the black market of steroids, but you will disregard that previous statement about the future world leader. Only the terminator can save the world for what is to come. The one turned againts sky-net of course. I mean, it would be an extremely lude concept to think that the mo'fo' that is sent to destroy the human resistance's leader would be an aide to huanity. No sir...Terminator 2 is our man.

I and him approve this statement(wink-face), or atleast taking the credit for a minor part in this great establishment of Pee-wee's only present day, kudo earning, butt-fucking bananza. Not to be confused with banana. It might exite Peewee to notice something that might resemble a man's dick, which was once a child's. Temptation by lord Satan himself. Blessed he, who is he, and he again, because without him being he and he, he would not be. praise be to p06, and go fuck yourself.

After retiring from acting in 1954, Pee-wee began a long, illustrious career as a diplomat. In 1957 he joined the US Foreign Service, and served in various posts in embassies, consulates, and the State Department. Among his more significant accomplishments as a statesman, he served as ambassador to Elbonia from 1958 to 1960, as a staffer at the US Embassy in Belgrade, Yugoslavia from 1961 to 1965, as ambassador to Yemen from 1966 to 1970, and as Papal Nuncio to Kamchatka from July 31 to August 5 of 1973 (until it was realized that he was, in fact, not actually a Catholic cardinal, but merely suffering from a bout of paranoid schizophrenia). Mr. Herman is most commonly remembered, however, for his leadership as Secretary General of the United Nations from 1977 to 1981. Also a brief mention in William Shirer's pullitzer prize winning "Three Famous Americans Who Were Shot In The Head" namely Abe, John Fitz, and the guy who sat in front of Pee-wee in the moviehouse.

Pee-wee Herman, on his wedding day.

Following Nixon's resignation, he abruptly left government service, and in 1986 he astounded many former State Department colleagues by making an attempted comeback by reentering the world of entertainment, particularly, becoming the host of a educational children’s television program Pee-wee’s Playhouse. This aim of this program was for children to “connect the dots, la la la” between personal and civic and encourage children to become good citizens. This program soon became popular among the target audience, children, and also stoned adults. He later starred in 2 feature films. First was the self titled auto-biography, “Pee-wee's Big Adventure”, chronicling his life at the state department and work with the Nixon Administration. His second film "Big Top Pee-wee", was an emotional journey through the Watergate Scandal and his long transition from government to private citizen/entertainer. Later, he was sued on two charges of copyright infringement because the films' names were similar to the porno movies, "Big Wee-wee's Adventure" and "Big Wee-wee's Top Mushroom" Because they were not similar enough, the case was overturned and Pee-Wee Herman was reported to have said, "Who names a penis 'Wee-wee?'"

He re-christened himself one Pee-Wee Herman. Looking down, it just seemed more appropriate. Of course, once he discovered the pleasures of this earth known as child pornography (which he was later incarcerated for), he could have been right-handed the new moniker "Big-Dick Johnson." After talking to fellow famed NAMBLA spokesman Michael Jackson about designing an appropriate trap for unsuspecting children--skulking around preschools aroused only suspicion--he later conceived the series "Pee-wee's Playhouse,” as he thought that such a program would be pure prebuescent toddler bait.

After a brief indecent exposure scandal, he has since retired to the Hollywood Hills where he enjoys collecting spam art, nudist nut golfing, and virtual jerking auftuin tennis.

A little known fact; Pee-wee's favorite teams are the Yankees and Expos

He later would become the arch nemisis of Michel Jakonsonian Comwomptwat aka Suxemen and his closest ally Jonet Jickenson the malfuctioning masked marauder or Triple MMM or JJMMMMMMMMM.

He was married to a bowl of fruit salad and had three sons, all of whom are named Pee-wee Herman, though they have different middle names.