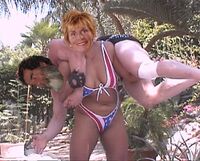 A superheroine from a distant future, Judge Judy is the sister of Osama bin Laden. Judy is known to take her opponents to task for many misdeeds, including parole violations and plotting to take over the world... oh wait... she already has.

Judge Jewdy (known man-hater) was spawned in a shallow pond before the dawn of history. Before her investiture as a judge in Noo Yoic City, Judy and sidekick Punch moonlighted as Japan's most famous crime fighting duo. This team single-handedly defeated Godzilla in the great battle of Domokun. Punch was incapacitated by the giant lizard, but Judy saved the day by wearing the terrible beast down with the power of her Unrelenting Nasal Pitch. Judy sentenced Godzilla to star in a lifetime of poorly crafted Japanese made for television movies.

After a sordid scandal involving Charles Manson and a dozen kielbasa sausages, Judy reluctantly departed Japan for the United States of America. Here Judy fought another infamous battle with the omnipotent Ronald Reagan. Reagan nearly defeated the noble judge with his Alzheimer's blast, but the quick thinking Judy redirected the rays with her Horned-Rimmed Spectacles of Judgment. Then she fucked a donkey. Unknown to her at the time, the donkey failed to pass a marijuana hair-folicle test. This had proved that Satan's grand-ma-ma had a purely homosexual deficiency in the land of 'Um.'

Judge Judy is famous for her television show in which she rules on small claim cases at 1:00 in the morning. When asked why she ran her court cases so late in the night she responded; "Because I'll desintergrate if the sunlight hits me! You try living for 279 years and survive the sunlight!" She later slashed the reporter's throat, killing her and was taken to court. But because she was the judge ruling in the court case she was let off. Her television show first aired in 1952 at one in the morning (when the show was broadcasted live) but due to a lack of audience and censorship, the time slot is now in the middle of the day sometime and is no longer live. 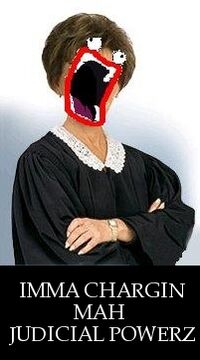 The fantastic one is at present utilizing her great powers for the good of humankind as an arbiter of peace in Dallas, Texas. Occasionally she and J.R. Ewing are spotted cruising the karaoke bars around town looking for the scourge of society, the Yakuza. The Yakuza shot J.R. in an attempt to gain control of the Ewing family rights to cheap Mexican labor, and stole Judy's Gavel of Condescension to subjugate the poor workers to their every command. Only with J.R.'s patented bilious attacks was the judge able to restore the gavel to her possession.

Using a vast range of knowledge concerning the anatomy of the human body, menopause, and physics, it is believe that Judge Judy can actually do three back flips in a row, as shown in her most recent commercial on the Fox network. Due to the effects of a rare form of menopause, known as menopause type B, the amount of testosterone in Judge Judy's body has greatly increased since the age of 52, when her ability to produce fetuses came to a dead end in the road of life. In the past few years Judge Judy's muscle mass has greatly increased due to this condition, and also due to years of anti-rape martial art defensive courses. Before beginning the production of her commercial for Judge Judy, the television show, which airs on Fox during weekday afternoons, she perfected doing back flips, specifically three in a row. Although some may doubt the validity of the ability of Judge Judy to complete three back flips in a row due to her age, race, and sex, she actually completes the flips in her commercial due to menopause type B, and does not need to employ the services of a professionally trained stunt man. In conclusion, Judge Judy will continue to be able to triple back flips due to menopause type B until the age of around 65, when the patients with type B normally peak with extremely high amounts of testosterone, causing increased sex drive, which leads to a death of over strenuous masturbation.

Things to note about the future[edit]

In 2003, Judge Judy was proclaimed the Patron Saint of teenage black girls and middle aged white women who watch TV all day long.

Judy Sheindlin had a short filmography consisting mainly of cameos and bit parts. Below is a complete list of these parts.

Other Shit About Judge Judy[edit]

She is immune to cyanide. As even a Wikipedian can tell you, that shits poison and can KILL YOU. Unfortunately, she can also fart cyanide if she really wants to. That said, you should run for your life if you're in her courtroom and hear a fart. I'm serious.

Another thing many people don't know about Judge Judy is that her gavel has more power than Thor's hammer. She has destroyed entire villages by striking it on the Earth. Peasants have feared her and her hammer for centuries, and there is no stopping her.