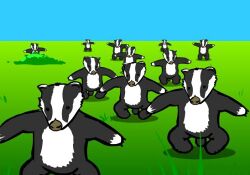 The results of uncontrolled memetic replication.

A meme is a cultural unit of information, often manifesting itself as a psychological or cultural virus. Memes are typically found on the Internet in overabundant quantities, where they seek out human brains to further propagate. The number of known memes was once estimated by Richard Dawkins to be "over 9000", a result which itself has become a meme and now places the current estimate at over 9001.

The term "meme" was first invented in the 1970s by prominent armchair biologist Richard Dawkins, who included it in his book The Selfish Gene. The book was really about actual genes, but he ran out of material halfway and needed to pad it out. His stroke of brilliance was to invent a term which would allow him to extend the reach of evolution beyond biological organisms, and into the territory of the human mind. Thus, the bane of Wikipedia editors' existence was born.

Much like a biological virus, a meme seeks to reproduce, mutate and spread far beyond what anybody wants it to, but cannot do so without a host. Without fresh, pristine minds to burrow into, a meme is doomed to fade into obscurity or become stale.

There is currently no one single place memes are known to originate from, although most of them seem to trace their roots to the cesspool known as 4chan. A meme begins life as a mildly-funny picture and/or tagline, which then gets parroted over and over until it grows out of control. The rate of replication varies, although some scientists find it comparable to the unrestricted growth of a badger population.

Eventually, it leaves the 4chan walled garden and spills over into the rest of the Internet, where it may infect sites like YouTube. YouTube itself presents a hospitable environment for memes to grow further in, thanks to ample bandwidth and bored users. This has led to the emergence of a subspecies known as YouTube Poop, where it displays a strong preference for altered footage of Philips CD-i games.

Eventually, a meme will take on all possible beneficial mutations and spread as far as Internet denizens will allow it to before it begins to decline. At this point, the brain will develop enough antibodies to the infection to realize just how stupid the meme was in the first place. A kind of herd immunity develops, and the meme can no longer propagate. Once old people begin repeating this "hip and cool" meme, its extinction becomes inevitable.

For those without comedic tastes, the so-called experts at Wikipedia have an article very remotely related to Meme.

A question experts in the psychiatric field have increasingly sought answers to is why a more general immunity to memes has not yet developed in the general human population. Indeed, memes appear stronger than ever, multiplying and evolving at more alarming rates.

A vaccine was recently developed to help protect against 95% of the most common memes, and is offered at many pharmacies around fall before "meme season" kicks in. During this time, it is too cold for many in the northern hemisphere to stay outside for extended periods of time, so they retreat indoors and waste time on desktop computers, exposing themselves to catching memes. For a time, the vaccine appeared effective.

However, the recent anti-vaccination movement has hampered herd immunity as people increasingly browse the web on their smartphones, arguing for individual freedom of information consumption. Thus, they no longer need to be indoors to contract and spread memes, putting the intellectual health of the general population at serious risk. The Center for Disease Control acknowledges this is a widespread and growing problem, but currently has no planned solutions on account of being too busy looking at captioned cat pictures.

Uncyclopedia as a meme habitat[edit]

Uncyclopedia accepts contributions from users all across the World Wide Web, which has made it particularly prone to meme infections. Few of these memes stand the test of time, bogging down the articles they inhabit until they kill their hosts. However, some are naturally selected to become intertwined with the cultural code of Uncyclopedia itself, evolving into the highly-specialized "in-jokes". A list of some of these more virulent infections exists for researchers to monitor the health of the ecosystem.

A notable example of these is the ever-present Oscar Wilde, who was a real person at one point. After death, scientists conducted an experiment to find whether genetic information could be converted into memetic information, and tested their theories on his corpse. The experiment worked too well, not only resurrecting Wilde but granting him powers including immortality, omnipresence, and the ability to telepathically inject new quotes into articles at will. Thanks to Oscar Wilde's new god status, the Geneva Conventions now includes sections banning the development of memetic cyberwarfare and the creation of other post-human Internet deities. "Wildeisms" are now targeted for culling as cliche, although full eradication of Oscar Wilde's many sentient manifestations appears unlikely at this point.