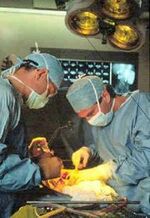 A pharmacist and his apprentice, performing intricate laser micro-surgery.

Apothecaries (as Pharmacists are known in fancy language) are people who can't get into med school, too dumb to do Chemistry, and too chicken to cut rats in Biology.

They were taught a 101 ways to wear their lab coat. They may learn a little bit about biology and chemistry.

The watchwords in pharmacist's training are do nothing and look good in your white coat in a drug store everyday.

It is pointless, no matter how much they learn, they will forever be stuck as the dudes in white lab coat standing around in the drug store.

A vending machine with a scale in it and a video phone monitored by hospitals and the police, for when the pharmacy inevitably gets robbed.