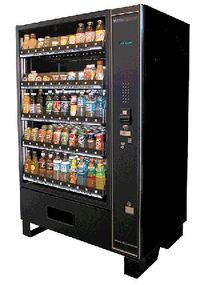 Vending machines are the most legal form of gambling in history.

A Vending Machine is a device used for gambling. In exchange for a small fee, it allows players to take part in a game of chance, where if they're lucky they will win chocolate, fizzy drinks or some other assorted snack-treat. Of course, the most likely option is that they will fall victim to one of the machine's many pitfalls, in which case they will receive nothing.

Today, it is the most popular mode of gambling available - as well as being the least illegal. Unlike similar games it is not restricted to casinos, and is enjoyed in all sorts of legitimate establishments, including schools, places of work, leisure centres and cruise ships. 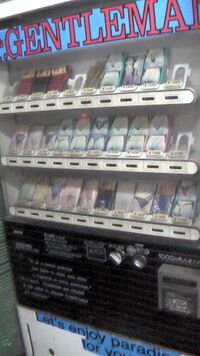 The game is similar to roulette in that the player must place their money on a number of their choosing. If this turns out to be the winning number, they receive the snack associated with it; usually a chocolate bar or crisps, although some vending machines will award fruit or cereal bars. The latter are much rarer, and are usually restricted to the so-called "modern workplaces" who are obsessed with healthy eating, targets and other key causes of stress. Such machines are intensely unpopular, and tend to become little more than an elaborate way of storing food for long periods of time.

Unlike roulette however, the winning number is not selected by a ball or a wheel or anything tangible, but by the machine's inner-mechanisms, making it impossible to predict how it will play out. And as if the game wasn't hard enough, the prices are prone to change as randomly as the rules are.

Before vending machines there was very little gambling in the workplace. Poker took too long so nobody ever got any work done, and roulette chips kept vanishing like all office stationary. Some employees tried betting on productivity, but this was dismissed as being far too tedious. For many years it carried on like this, until a man named Jonathan Vending had an idea.

Jonathan Vending was a merchant who had traded in sweets for over 30 years, man and boy. One day however, a group of Black and Jewish men broke into his shop and burned it down, rudely ignoring the "no Jews, no Coloureds" sign in the window. Fortunately the police apprehended four Irishmen following the incident, who were hanged as a reprimand. Despite this it seemed Vending was ruined. With a warehouse full of stock and no shop to unload it, Vending needed a plan - a new way of dispersing snacks and/or drinks. It was around this time he made his first foray into confectionary-gambling. 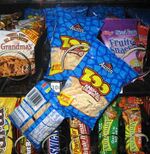 Vending toured the local workhouses with his new game, and quickly made a name for himself. For a small sum of money - usually around 10 bob or half-a-thruppeny - he would let the workers try and guess which vendible he was thinking of. If they guessed right, he would drop it in front of them, leaving them to bend over awkwardly and pick it up. Eventually the game caught on, and Vending raised enough money to build the very first Vending Machine.

Some historians disagree on the origins of the game. There is some evidence that something similar was taking place as early as 5am, 17th of March, 1912 - nearly five whole minutes before Vending was born. During this period, some merchants adopted the practice of only giving the customer the product they'd paid for if they "felt like it", actions which are remarkably similar to how vending machines work today. Whatever the case, both principles live on to this day in the modern game.

Early machines stocked all the popular confectionaries of the era. All the old favourites were there, including Slaver's Mints, Chew Sticks and, of course, Old Favourites. They also had potato crisps in all flavours - cheese, onion, and cheese & onion. The crisp packets were designed to be the same width as the drop-area, so the crisps almost always get stuck on the way down. It was this constant annoyance that led to the development of something called "the Magic Touch".

The Cadbury Mafia will melt your skin and not in your mouth. 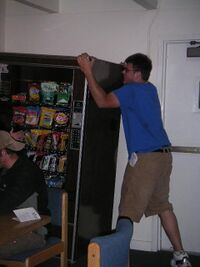 The "magic touch" in action.

As with all forms of gambling, cheating is widespread. The so called "magic touch" is one of the most notorious methods used, and was devised almost as soon as the machine itself (if not sooner). To combat the problem of coils not revolving properly - an occurence that would leave the snack and/or treat dangling in mid-air, as if to taunt you - pundits took to shaking the machine with their hands, hoping to wobble it free. Some better-endowed players even tried reaching inside the machines to snatch the prize that was denied to them. Unfortunately for them, this tended to result in their long arms suddenly being made much shorter.

Some machines are wired to alarms to prevent such actions, although this is at the discretion of those who own the venue. Many of them are also built to be purposefully heavy in an attempt to threaten the [[International Rules Of manhood of anyone who tries to budge it. Cheating is widely condemned in the gaming world, and is likely to attract the attention of the Cadbury Mafia.

Machines are coloured red to commemorate those who died in the Great Toffee War.

The vending machine is also one of the most complex forms of gambling. Unlike most games, where you either win or lose, vending machines have a spectrum of outcomes ranging from extremely good to extremely bad. For instance, a customer could insert their money without it being registered by the machine, leaving the credit screen displaying a large rectangular zero. The money is "swallowed" by the machine, and seemingly gone forever. The customer thus doesn't get to choose a number nor can they retrieve their cash. The machine may even choose to release the money into the change tray later, once they've walked away, leaving it for the next person to find. This makes it both a good and bad outcome, as although the first customer has lost all his money, the second gets a big payout.

Another example of a good outcome is where the previous customer has forgotten to collect their winnings (which although rare, happens surprisingly often), meaning that when you turn up there is already a chocolatey prize waiting for you. The drawback of course, is that it may not be the product you selected, maybe even one you don't like. Something with peanuts in, for example - but then again, everything tastes nicer when it's free. So you see, things are never as simple as winning and losing with vending machines.

Other times, the machine will give you the wrong product, either on purpose or by leading you to key in the wrong number. The latter can be achieved quite easily with an illegible font face, where a 5 is only one line away from a 9, and a 3 is just an 8 from a different angle. Some models will refuse to accept certain coins, like 5 pence pieces, but won't warn you of this. Some are in dire need of an update, and will only take those really big 50p coins you don't get anymore. Sometimes they just won't accept any money at all. Ultimately, the machines are impossible to figure out.

In her book on the subject, Lynne Grenadine describes them as "vastly intelligent - cruel, even". She documents their many intricacies, saying:

Despite everything however, there is still one thing that vending machines have in common with pretty much every other form of gambling: the pundits think they can win, but in the end the house always comes out on top.