“How the hell has that hick music survived one hundred years?? Mabye there's something to this "Country music"”

~ Everyone on Country Music

“Ah've tried to drown ma sorrows, but they've all learnt how to swim”

Country music (or Hickcore) is an art within itself being both a form of brain aching horribleness and an oxymoron. Country music was invented by such characters as Doc Watson and Slim Dusty. The former being a doctor who went by the surname of Watson and the latter being an under-eating farmhand. They came up with their own names as well as their own music, which is probably where all the talent went.

This particular genre of music is different from enjoyable sorts of music in that it considers electricity a moral sin. Then again, what with all Country songs being about every other conceivable moral sin possible (see Murder, Rape, Adultery, Drugs and Alcoholism) it's surprising that electricity hasn't been sung about. Rumors have been spread that Tipsy McGee O'Fagherty (of slide guitar-fiddle fame) recorded a B side containing an electric instrument but was smited by God for doing so.

The origins, prior to the aforementioned Doc Watson and Slim Dusty, are little known. The story goes along the lines of how Country music and 'The Blues' used to go hand in hand before the guitar was invented, which is when those hands started playing guitars instead. Back when America was first being built by the millions of slaves, there were three major slave groups. The white slaves, the black slaves and the blue slaves (more commonly known as Smurfs). All three had a very intuitive musical style. The white group got heavily into techno, the black group into urban and rap and the blue group into their own new genre of music, so called the blues. Upon making the Gotham City to Chicago train line there was a dispute between the three groups, especially between the whites and the blues, as the whites used electricity for their music. 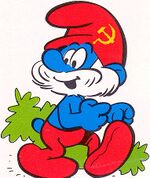 One of the blues in his traditional war hat.

There was a war fought and almost all of the blues population was wiped out, save a few who made their future career on a children's tv show. The whites left for Europe and Australia and all over the place again and the remaining peoples wrote songs of tragedy about the lost race of blues. These songs have now diluted in meaning and are a whole manner of subjects, but we always pay hommage to that war by singing songs of "The Blues".

"Ohhhh my wife left me last night, after I'da been out stillin' all day. But then the still exploded, killed my dog and blinded meeee. I passed out fer' 'bout 8 hours, then tried to drive my truck to go buy some beeeer. *four piano notes* On the way thar mah truck broke down, on the roooadd. *piano* Then as I cussed out that fucking no-good piece a' shit...*piano* two coppers came up to me. I smelleda' whiskey and was drunk, as a dooog. So now I'm in jail...*piano + drums* 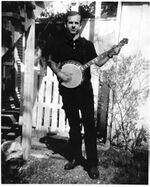 It has been noted often that hardcore listeners of Country music die at some stage or another in their lives. This is a serious issue that is being addressed as hastily as possible. Unfortunately so far no plausible reasons for death have been put forwards. Even more unfortunately, the more Country music stars are dead, the more songs there will be sung about them. Therefore causing more death. This follows the theory of infinity.

Sorry did you mean Praise of country music?

Country Pop is often mistaken for a sub-genre of music. Unfortunately for those record stores who have bought the 'Plastic Genre-Divider Card' set containing 'Country Pop'. Country Pop is the sound a cow makes when it is prodded till it explodes. Then again, there is not much difference between this sound and the sound of music which has been placed under the Genre of 'Country Pop'.