The Martian Ocean is -- or was -- a result of the Great Flood. (But see Hindu version, below.)

The Martian Ocean as it appeared in antiquity.

God, having come to believe that He'd screwed up in creating mankind, decided to drown everyone. To do that He needed an immense amount of water, enough to raise sea level by maybe 4 or 5 kilometers. By chance He had stashed just the quantity he needed on nearby Mars, in the Martian Ocean.

Ok, it wasn't by chance. Being omniscient, He knew He'd want that water in order to wipe out land-living life on Earth. Why his omniscience didn't tell him that mankind would turn out badly is beyond the scope of this article. See instead Limitations of Superpowers as Applies to God.

At any rate, God simply evaporated the Martian Ocean and re-constituted it on Earth as the Noachic 40-day global rainstorm. Of course as we all know, after deciding He'd made a mistake and ought to wipe everyone out He flip-flopped again, and made up His mind (final answer) to save Noah and his immediate family. As a kind of ace-in-the-hole He also preserved all the diseases and parasites He might find useful for tormenting mankind later, as well as others of His favorite land animals. Left behind were dinosaurs, unicorns, dragons, mastodons, giant ground sloths, intelligent politicians, Godzilla, saber-toothed tigers, and other preposterous and impossible creatures.

When He was done drowning things, God gradually evaporated the surplus water and returned it to Mars. Unfortunately, the thin carbon dioxide atmosphere of Mars caused the mighty rain thus created to escape into space, where it formed the tenuous rings around Jupiter. 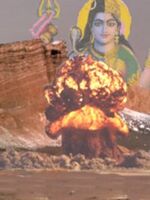 In the Hindu view, the Martian Ocean came from the Nipple of Brahma, and was divine milk. By placing the Celestial Martian Ocean of Milk on Mars instead of Earth, Brahma hoped to keep Earthly poo from turning it to cheese. (This was a bad thing for reasons that will become clear later.) However Vishnu, egged on by Ganesh, snuck an exceptionally fertile cheddar culture onto an asteroid and crashed it into the Martian Ocean. (Vishnu likes to tease Brahma, and once put a decaying fish in his emblematic water-pot. It is said that after drinking Brahma gagged continuously for seven kalpas, which is 70 billion years.)

Of course the cheddar bacterium spread rapidly through the sea of divine milk. Molecules of the cheese evaporated into space and the aroma caught the attention of the evil Bhodis of Ngathama, who reside on Saturn's moon Titan. These fiery 13-armed demons love cheese above all else.

Shiva resolved the problem of the burgeoning Martian cheese in a great battle of pasteurization, using his Trident of Whopping Destruction to destroy the cheese. This saved the inner planets from invasion by the Bhodis of Ngathama.

Hindus can point to a stone on the banks of the upper Ganges which they say is a fragment of the Martian cheese which escaped destruction and later immigrated to escape the rampant unemployment on Mars.

Now, the concupiscent reader will have noticed that the so-called Martian Ocean is actually not one of Earth's fourteen oceans. Not in a strictly factual sense. However, in both explanations the Martian Ocean is inextricably linked to Earth. In the Christian version the Ocean actually resided on Earth during the Great Flood, and in the Hindu version was changed to an earthly substance -- cheddar cheese -- from its original celestial form.

Therefore in 1931 it was the international consensus that the Martian Ocean would henceforth be listed as one of Earth's fourteen oceans. This, of course, brought the count to fifteen.