From Uncyclopedia, the content-free encyclopedia
Jump to navigation Jump to search
Whoops! Maybe you were looking for Green peas? 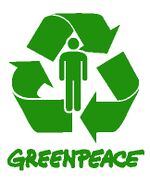 Greenpeace wants you to throw them in a recycling bin.

“Instead of complaining that computers contain toxic materials, just stop eating computers! Computers are not intended for human consumption!”

“Oh, wait, no, it's alright... it was just some Greenpeace protesters.”

~ Lorry driver on running something over

Greenpeace is an terrorist organization originally created to honour Mother Nature's kingdom and prevent mankind from destroying it. Nowadays, however, it just pisses everyone off. It's ultimate aim is to safeguard the Earth's ever decreasing natural resources, in the form of animals and untainted natural flora, through the complete and utter annihilation of the human race. Failing this, human societal progress must be stalled as much as possible. Going back to nature and jumping around naked eating bananas is simply not enough; the nuclear option is the only option they will consider. It is rumored that Greenpeace members do so much treehugging that they have now created their own hybrid species between trees and humans, known as Trumans. The average Greenpeace member tend to be gay, or French. There are Argentines who join in, but they think that they are in the Navy. They also think that Fray Bentos is a part of Colon in Argentina.

In 1972, the fledgling Greenpeace group, having emerged blinking into the world, attempted its very first act of terrorism not even a year after it was founded, in which they attempted to gain nuclear weapons being tested by the French in French Polynesia. Recently unclassified reports of the operation from SDECE state that the Greenpeace members acted like normal protesters up until their attack on the military facility in which the nuclear weapons were kept. Only through the swift intervention of the SDECE Special Attack unit were the brutal warriors of Nature stopped from enacting a nuclear holocaust on the human race. The only good thing ever done by the French was the sinking of the Greenpeace junk called the Rainbowed Warrior

“Oui, it was horrible! They fought like bears, moved like tigers, shreaked like monkeys, it was terrifying, even before they brought out the guns. If it hadn't been for the fact they ran out of ammo, I don't know what would have happened”

~ Julier Coustou, The Only survivor of the 67 men team that thwarted the Greenpeace militants

The French government, seeing as they could barely stop the Greenpeace warriors even with their elite troops, swiftly scrapped their nuclear program in the area. Greenpeace, seeing that there was no chance of gaining the weapons using brute force, claimed that they had been attempting to stop the testing of the nuclear weapons in the area.

In the past Greenpeace has raised media attention over a large variety of really really heavy issues including but not limited to:

Greenpeace are mainly concentrated on:

Basically, most Greenpeace rallies usually involve yelling at those damned "corporations" because what they've done to the environment, and frankly, if you've gone to a Greenpeace rally, you are either Argentine, or more likely you just killed yourself. What, you may ask, does this accomplish? Well, let's ask those damned corporations, sitting up there in their chairs with their cans of aerosol, polluting and whatnot. Usually rallies last a whole 2-3 hours before the ralliers get tired of being hit with garbage and booed, which occurs more often that you can imagine (12 times). Greenpeace talks have also been noted to be of a different language, of which usual humans with IQ of over 50 will not be able to understand, while those falling below the mark do. Hence, it has been made impossible for everyone to get the tree-huggers message. An Albanian scientist recently discovered that members of greenpeace actually originated from the far woods of the Amazon, wearing leaves for shoes and eat grass to stay alive.

Greenpeace are known for holding very odd advertising campaigns. Their most notable campaign was 'Save The Polar Bears Or We'll Kill Em' All'. This campaign included some hippies on weed attempting to poison all polar bears unless they got a certain amount of followers. This failed epically, mainly due to the fact that all Greenpeace activists/Dick Heads attempted to get high on the poison themselves.