The Russian Czar was a comedy trio that consisted of 'The Englishman', 'The Irishman' and 'The Russian Tsar' who rose to fame touring Communist Party meetings and social events. Little is known about the troupe's players save their stage names, though an increasingly popular theory amongst historians is that The Russian Tzar was, in fact, Czar Nicholas II of Russia. 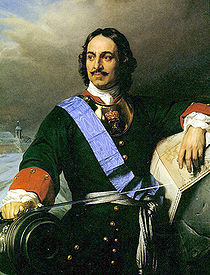 Potrait of Uncyclopedian Tsar, Peter The Great, At Age 47 which reigned Uncyclopedia In 2007

The Englishmen, Irishman and Russian Tsar act would begin on a makeshift bar table seated around which would be the Englishman, the Irishman and a preselected member of the audience dressed as a Klan Wizard. The Englishman and the Irishman would engage in an hour-long discussion about who was on first and what was on second. When the discussion came to a climax the audience would be encouraged to pelt the KKK member with custard pies, or, if those were not available as was often the case with communist party gatherings, large rocks.

Once the KKK member lay motionless and bleeding on the floor and the Irishman had finished huffing kittens the dialog would resume and the Englishman would express his dislike for his mother in law, negroes, whoopsies and Kaiser Wilhelm II. The Irishman in return would raise the fact that his son, Pancake, had been born with a growth hormone defect and was forced to become a twelve inch pianst playing for communist party rallies. At this moment the Russian Tsar would enter in a state of outrage and the Englishman would be heard to remark "This is another fine mess you've gotten us in to." The Russian Tsar would then proceed to debunk the communist manifesto and chase Jews around with a stick until the Englishman and Irishman grew tired of his behaviour and took him to be executed in a palace fifteen miles south of st. Petersburg much to the delight of the audience who were by now deep in to the chorus of The Red Flag.

The act was widely condemned as pro-Communist propaganda and criticised for its gratuitous kitten huffing by US officials and the media alike. Wherever they played they would often face a mob of protestors outside their hotel rooms and would be turned down by more reputable venues. It is reported that at one performance in a comedy club in Harlem the Englishman was chased off stage by an angry mob when he decided to wear boot-black on his face.

Eventually the group happened upon a consistent venue in the southern states where they were completely unaware the world had moved beyond the early nineteenth century until the troupe disbanded and the Russian Tsar was executed by agents of Joseph Stalin in the late 30s.

It is often speculated that the material from The Russian Csar provided inspiration for many comedy acts down the years and planted the seeds that lead to the communist uprising in America that will claim power in 2157. The few survivors who knew, or hosted the performers however have always remained very quiet on the matter claiming that Zombie Lenin would "cap them good" if they ever told of their secrets.