“Boris Yeltsin is so stupid that he cannot even count to ten with his fingers.”

Boris Vodkavich Yeltsin (Russian: Борис Водкович Неловков Ельцин) was president of Mother Russia between drinks. He made history as the first elected president of the Russian Federation, and as the only leader of a major country to record a popular approval rating (6%) lower than his blood alcohol concentration (9.1%). In Russia's first orderly transition of power, he gave up control of Russia to Vladimir Putin in exchange for an unlimited supply of vodka, delivered intravenously to him through a trans-Siberian alcohol pipeline so mammoth in size that it is visible from the moon.

For the religious among us who choose to believe lies, the so-called experts at Wikipedia have an article about Boris Yeltsin.

Boris Yeltsin was distilled in Butka, Talitsky District, Sverdlovsk Oblast, Russia, USSR on February 1, 1931. He consisted of a mixture of gin , vodka, wine, and highly-potent methanol. His breath was flammable and he had a thick foamy head. He sweated gin and peed beer.

Boris's brewery was run by a very troubled couple. His "father," Nikolay Yeltsin, was convicted of criticizing the Soviet Union and sentenced to drink himself to death. His "mother," Klavdiya Vasilyevna Yeltsina, was a seamstress. Despite her profession, her husband refused to allow her to seal his lips shut, which didn't work out well for anyone in the family. Had she sewn up the mouths of her husband and son, they would both have lived to age 100 and Russia's consumption of alcohol would have dropped 41%. [citation needed]

Yeltsin realizes that to succeed as a Communist, he would have to follow the trend of shaving facial hair, which is probably a result of Global warming.

In school, the young Boris showed an unquenchable thirst for knowledge. While his father was busy being a dead, unproductive non-member of the glorious Communist party, young Boris went on an alcohol-fueled fact-finding journey. Seeking to learn more about different political systems, Boris traveled first to China, where Chairman Mao had liberated the Tibetans from the wicked Dalai Lama. He then visited the "Capitalist" Republic of Korea and the "Communist" Democratic People's Republic of Korea, and concluded that people in the latter must have more freedom because they have a more populist-sounding name.

Just to be sure, he finally compared Yugoslavia with India to see if a Communist or a Capitalist country is better able to handle diverse populations. He looked at the government news sources, and found a shocking difference: the press of Yugoslavia makes no mention of ethnic strife, while India is full of religious, ethnic, and cultural tensions. Young Boris Yeltsin finally concluded that Communism as a system of government tasted great and was more filling than Capitalism in every way.

Rise to the top

In his thirties Yeltsin ended his restless journeys and began a reeling, unsteady lunge to the top of the Communist Party hierarchy. Initially he dreamed of becoming an apparatchik, only to wake up and find he was still an apparatidude. In 1977 he was appointed as party boss of Sverdlovsk, and the parties he threw during the next eight years did not disappoint. He captured the attention of the world in dramatic fashion in 1990 when, as Soviet hard-liners were mounting a military coup against leader Mikhail Gorbachev, Yeltsin strode into the Red Square, climbed onto a tank, gestured to the spellbound crowd, threw up, and passed out. In gratitude the Central Committee made him President.

Yeltsin's presidency brought about great changes in Russia. His biographers have described his accomplishments as "staggering." He soon became feared for his Flaming Fist of Liberty, with which he single-fistedly defied the Communist Party of the Soviet Union, leading to the disintegration of the USSR into the CFKATUSSR (the "Country Formerly Known As The USSR", usually represented by an unpronounceable symbol). Ironically, he was himself a member of the Communist Party, so does that mean he liberated himself from himself? 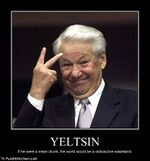 It's a good thing he resigned before it was too late... 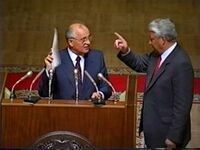 Take all your shit and get out. It's my throne now. And gimme some vodka! NOW!

Following the collapse of the Soviet Union, Yeltsin promoted privatization of former state enterprises as the centerpiece of his economic reforms. Privatization, viewed in the West as the key to the transition from the Soviet-era command economy to a free market, was known in Russia as perestroika, or "theft." In the early 1990s, seeking a way to finance Russia's growing foreign debt and gain support from the Russian business elite for his bid in the 1996 presidential elections, Yeltsin loaded a fire hose with millions of stock shares in some of Russia's most valuable state enterprises, aimed it at a crowd of tycoons and turned on the spigot. This giveaway of valuable state assets created a powerful cabal of billionaires known as the "oligarchs". These included Boris Berezovsky, who bought up Russia's main tuxedo rental company Gazprom; Mikhail Khodorkovsky, who gained control of Russian auto giant Yugos; dildo magnate Leon Trotsky; and nesting doll kingpin Roman Polanski.

When the Russian people demanded reassurance that the orgy of looting that accompanied their country's headlong rush to capitalism was not the disaster it appeared to be, Yeltsin calmed the nation. A natural communicator, he knew how to use props effectively in his televised speeches. He began: "My fellow Russians, in these uncertain times I know some of you see capitalism as a glass that's half empty" (here he held aloft a tall glass of vodka, and then drank half of it to demonstrate the concept). "But I see the glass as half full! Even on days when it seems completely empty!" Yeltsin slugged down the rest of the vodka and belched. "We will soon realize it is full" (refilling the glass) "and not half-full" (drinking half) "or empty" (finishing glass) "No! I'ss fuuullll! Fuller than everr!" and he chugged the rest straight from the bottle in a florid burst of Churchillian oratory. He then stripped naked and collapsed on the ground.

Yeltsin welcoming President Clinton to Moscow during the US operation in Bosnia.

After winning a second term as president, Yeltsin invaded Chechnya by mistake; he had intended to attack the Czech Republic. By this time Yeltsin required daily transfusions to keep his blood alcohol concentration from exceeding 100%. According to The Onion, he once gave up control of Russia to a random flock of geese. This was hailed as a brilliant move in the West, and was greeted with enthusiasm in neighboring Poland, Belarus, Ukraine, and Kazakhstan, but the domestic fallout drove him to resignation in 2000.

His successor as president, Vladimir Putin, was almost killed by what he called "an avalanche of empty bottles" when he first opened the door to the office vacated by Yeltsin. Although historians have rated Yeltsin's presidency a disaster, his vice president, Dyik Chyenskey, has convinced viewers of the Russian TV network Foxky Newsky that the new guy is much, much worse. To ensure no more mean drunks would rule Mother Russia, Putin basically declared himself Emperor of Russia, a post he has today even after handing over his presidency to Dmitry Medvedev.[citation needed]

In May 2007, while napping in the street, Yeltsin was run over by a comparatively sober driver, and exploded in a gooey mess. Yeltsin's autopsy provided the Russian Army with materials which they used in developing a special incendiary munition that is fat, soft, and sweaty on the outside, and highly flammable on the inside.

It is said that Yeltsin's soul is resting in the deepest pits of hell, but because of his extraordinarily high alcohol concentration, he is expected to burn for all eternity.