“Peter the Great opened the "window to Europe". Lenin closed it. Gorby reopened it. Putin reclosed it. Damn it people! What the fuck!? Stop playing with windows!”

☭ Mikhail Birthmarkovich Gorbachev, (Russian: Михаил Родинкович Горбачёв) ☭, also known as The Gorby, (Russian: Тварь, Россию развалил!), was the Chernobyl Plant nuclear safety inspector, later promoted to and best known as the Last Emperor of the Soviet Onion. Due to the lack of knowledge in political and governmental issues, he unwillingly destroyed Communism, making himself the most hated man in USSR in the process. However, he became wildly popular in the West, and very nearly deposed Ronald Reagan in a bloody 1989 coup attempt. He now sells used Lada scrap parts outside Volgograd, occasionally being requested as a map reference source for studying the geography of Italy. 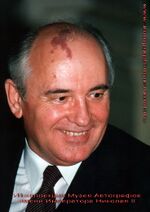 Gorbachev and his famous tattoo of the map of Russia

Gorbachev was immaculately conceived and gestated in the belly of a goat for 27 months. Upon delivery, he immediately declared his allegiance to Communist principles and began hunting down and executing Kulaks. At the age of three or something like that he got a weird shaped, ugly, disgusting, vile, horrendous, birthmark on his head. This mark has been interpreted to be the Virgin Mary, like the one on that piece of bread. In Moscow, Stalin heard of his brave deeds and immediately placed him in charge of the KGB. Unfortunately, this conflicted with Lavrenti Beria's quest for world domination, and Gorbachev was summarily executed by firing squad in the first of the Great Binges and Purges.It took over ten pounds of bullets to take down this magnificent beast and before the KGB could get to the body, Astin Kutcher with 'Punked' was on the scene and everybody had a laugh.

Gorby was crucified, died, and was buried. On the third day he rose again according to the scriptures and was posthumously rehabilitated. This time, he was re-born as a virulent anti-Communist and decided to bring about the downfall of the Soviet Union by any means necessary. Being a clever sort of chap, he decided to infiltrate the Communist Party from the inside. He joined the nuclear (pronounced nu-ku-lar) research group and served as Safety Inspector of Sector 7G at the Spr- err CHERNOBYL Nuclear Plant from 1946 to 1955. Within the next years he had been double-hastely promoted throughout the Party and elected President and Czar of all the Russias, and Grand Dragon of the Russian KKK (Kings of killed keystone) - who actually have nothing against black folks, but really hate Jews.

As President, Gorby had a full schedule and spent almost all of his time catching butterflies and contemplating his navel, plotting and scheming for the day when he could destroy his country. Despite this, he still managed to find time to take tea with the Queen of England, which was something they both enjoyed. However, according to the Queen, "we were just friends". A momentous event occurred in 1956 when Gorby read the text of Khrushchev's Secret Speech, in which he denounced Stalinism and admitted his own homosexuality. This had a profound impact on Gorby, who was also gay, and cemented his hatred of all things Stalin, which had begun shortly after his resurrection and rebirth. Several years later, around 1962, Gorby took a first stab at toppling Communism by charging head-first into the newly constructed Berlin Wall. Unfortunately this attempt proved unsuccessful, and Gorby was left with a nasty scar on the top of his head for his troubles.

In 1964, Khrushchev was seen walking into a Kharkov whorehouse, never to be heard from again. In his absence, Leonid Brezhnev stepped into the void and assumed the title of Emperor of the Universe, with a minor in Russian dictatorship. He became Gorbachev's patron and Gorbachev continued his rise through the party ranks, still dreaming of the day when he could annihilate the country. The Brezhnev years became known as the "years of stagnation" due to the slowdown in the Soviet economy and general sense of malaise among the populace. This became known as "the malaise of the people", in true commie fashion. However, the economic slowdown wasn't all Brezhnev's fault. During the period of the Great Binges and Purges, the Soviet Union's most profitable export had been human bones, which were used in the West to make knick-knacks. Once the killings stopped, so did the bone exports, and Brezhnev watched helplessly as the economy went into sharp decline. In order to remedy this, Brezhnev invaded Czechoslovakia in 1968 under the pretense of ending the "Prague Spring." However, this was actually a bone-gathering mission, and was fully supported by Gorby, who had an extensive collection of knick-knacks. 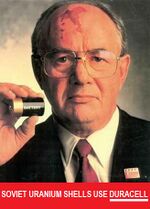 Gorbachev's campaign poster showing heavy reliability of the Soviet Union upon foreign market products, in this case, American batteries. This had presumably led the union into communist and economic failure throughout the late 1980's. 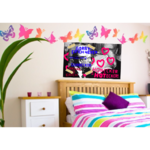 Gorbachev later admitted that the reason he agreed to take the position of General Secretary was because he thought it would get him a date with East German leader Erich Honecker, as it had for Brezhnev before him.

By the early 1980s, the leadership of the Communist Party were a bunch of decrepit old bastards, and the party wasn't much of a party at all. In fact, it was more like a geriatric ward. This is known as the period of "Old Commies Dying." Brezhnev gave up the ghost in 1982 after a long battle with obesity, senility, and stupidity, and was quickly replaced by Yuri Andropov, an ex-KGB man and high Satanic priest. He died within months of taking office, after a bloody struggle with the Prince of Darkness himself. He in turn was nominally replaced by Constantin Chernenko, who in fact was the corpse of a homeless man which Gorbachev had propped up in a chair, tied strings to his arms and operated like a marionette while hidden in the ceiling of the Kremlin. Once the corpse began to decompose, Gorby chucked it off a bridge and assumed the title of "Emperor of the Universe, King of Russia, Lord of the Rings, and Grand High Priestess of the Royal Order of Pastafarianism". With his former patrons now dead, Gorby was free to carry out his mission to sabotage and fully destroy the Soviet Union.

In 1985, with his supreme power consolidated and after a voyage into the De Lorean DMC-12, Gorbachev announced his plans for Glasnost and Perestroika: Glasnost meaning "chaos", and Perestroika meaning "poverty". He had the full support of the Party in this effort, as they were too bored to really care, and figured these new policies might bring some much needed excitement. Finally, after years of lies and deceit, the people were able to speak and hear the truth about their history: Lenin wasn't "Lennon," the cool dude they thought he was, but a balding, syphillitic, lunatic Commie; Stalin was gay, short, psychotic and insane; and their whole country was just a fucked up lie. Immediately upon realizing this, the people's minds were completely and utterly blown, and the entire country immediately exploded, fiery chunks raining down for several weeks. This became known as "The Great People's Mind-Blowing Explosion."

Once the smoke had cleared, it immediately became obvious that Gorby's policies had been completely successful. The Soviet Union had ceased to exist, and where there once was order there now was chaos (Glasnost) and poverty (Perestroika). Gorby had singlehandedly destroyed Communism in his own country, and in Eastern Europe since those crappy Warsaw Pact countries had been incinerated in the "The People's Mind-Blowing Explosion." However, instead of thanking Gorby, his people heaped scorn upon him and forced him from his low consumer grade plastic jewelled throne, banishing him to Siberia. There he toiled deep underground in the spice mines of Novosibirsk, as his country began a long, downhill slide known as "The People's 15 Years of Collective Misery." Sometime during this period, Gorby is known to have escaped to Volgograd where he sells used Ladas under an assumed name. Also, Mr. Gorbachev serves as a part-time substitute U.S. History teacher. 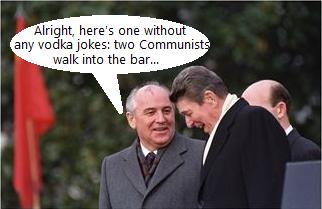 As a general secretary of the Politburo, Gorbachev was renowed for his keen and acute diplomatic skills.