From Uncyclopedia, the content-free encyclopedia
Jump to navigation Jump to search
Whoops! Maybe you were looking for Early cars?

Your average drug fiend communist homosexual is three fourths in mass made of junk. Thick junk is pumped by the heart through blood vessels instead of good [[]] blood and forms a nodule in the skull where the brain used to be. Other than the junk a drug fiend's body is hollow. He was either born a godless atheist without a soul or it has already been taken by the devil to hell and his body is controlled completely by The Beast's puppet strings (junk). This process is irreversible.

The moods and motivations of Junk[edit] 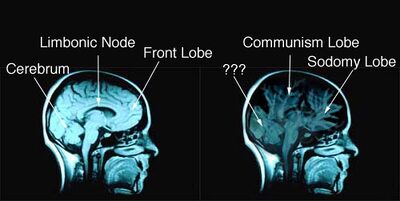 The differences between a healthy brain and the Junk Fiend's cranial nodule are clear. Though little is known about the hellish workings of a junkie's mind, two of the three lobes have been identified.

While the entire substance of a junkie is dedicated to procuring more junk, Lab Research on the bodies of drug users has identified two of the three differentiated lobes of the cranial nodule as the sodomy lobe and the communism lobe. The first drives the drug fiend's sexual perversions and is constantly engaged in concocting devious plots to physically defile the innocence of the world's young people. The second is involved in insidious worldwide communist plots to debase democratic civilization.

The purpose of the third lobe is thus far unknown to modern science.

Junk is called many things, but whatever the drug fiend calls it, it's all the same thing: an admixture of the blood and semen of Lucifer. Some of the names of junk are:

Cocaine (blow, snow, white) is the driving force of the Jewish Hollywood Liberal Conspiracy. Cocaine is a purified form of the crack. It is manufactured by Mexican immigrants in the labs of Negro drug lords as part of the conspiracy to destabilize Western Civilization. Major figures in Hollywood and the Liberal and Communist political parties spend thousands of dollars on cocaine every day and use their access to national media systems to broadcast satanic and anti- code messages. Cocaine can be administered through the mouth, nose or anus, as well as taken through cuts made in the skin by a razor or other sharp blade (known as "doing lines").

Heroin (junk, tar, horses, spike lee) is junk in its purest form injected directly into the bloodstream. If you were to cut a drug fiend, he would bleed heroin. All of a drug fiend's bodily fluids, including his semen and urine are at least 80-85% heroin. Heroin contains HIV virus and often other sexually transmitted diseases. Though heroin is generally injected directly, it can also be converted to a gas form and pumped into the air (especially in children's schools and daycares).

"Crystal" Methamphetamines (crank, ice, tweak, slug) is an illicit chemical "cooked" in highly dangerous conditions in underground laboratories by those enslaved to the junk rooted in their flesh. Methamphetamines are extremely corrosive to human flesh and tissue, and, when smoked, quickly deteriorate the mouth, throat, and organ systems of the drug fiend. This internal corrosion is mirrored by an external blight of the skin and self-destructive acts by the drug fiend against his own body. Though methamphetamines are generally used by inhaling their smoke and fumes through the mouth and nose, once released into the air by combustion, the toxic gases seep into the body through other orifices and corrode the interior organs.