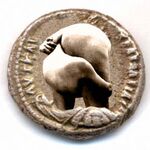 Gluteus Magnus Maximus (Latin:IMP·GLVTEVS·MAXIMVS) (340-388), known earlier in his life as Gaius Sexius and Arsonius Posterius. He is generally known to historians by the title "Anus" (revered hole). He planned to end civil war in the Roman Empire and grab all the imperial pie. Gluteus Maximus failed, which is why you haven't heard much about him.

Gluteus Maximus was born as Gaius in Andorra. His father, also Gaius Sexius, came from a respectable but undistinguished family of the homoerotic order and was an ass, by all accounts. Most importantly, he refused to give his partners a reach-around, which is why he was forced to sleep with Gaius's mother, and his goat.

Being a precocious young man that won all the fist fights from kindergarten onward, he distinguished himself as a leader with an iron fist, which he kept on his nightstand. He was a big boy and joined the Roman army when he reached his 12th birthday. He saw action in various wars and was marked down for greatness. For some reason, he chose a career of freezing his balls off manning Hadrian's Wall. He asked for a transfer and was sent to — Wales. This was an equally grim posting, but he did meet his wife, Elen. They had a family and it seems, Gaius was generous with his seed as in later generations, two thirds of the Welsh nobility later claimed direct descent from him.

It was perhaps to get away from Wales that Gaius rebelled against the Roman emperor Gratian who was then resident in Northern Gaul. Gaius promised his men plenty of goodies if they followed him. Later that evening, Gaius and friends caught the night ferry to Le Havre.

In an attempt to escape a history of passing bad cheques, Gaius changed his name to Gluteus Magnus Maximus (surnamed 'the Great Dane'). This auto-enabling impressed the local Gauls, who flocked to Gluteus Magnus's imperial banner - a picture of a fat arse about to dump a load on Gratian.

Emperor Gratian dismissed Gluteus Magnus as a 'fart bucket' but then saw his own army melt away rapidly. He then went on the run, but was caught hiding in the toilets on a chariot lay-by and slain. Gluteus Magnus Maximus had gone 'legit'. 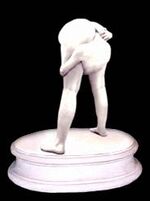 Gluteus Maximus took control of Gaul (he had Britain in his backpack) and managed to encourage the Spanish to join his empire. 'GM' should have made a move into Italy to depose Gratian's younger brother Valentinian II but in the end nothing was done. It seems Gluteus was having too much of a fun time to go chasing after 'Little Vali' and preferred the imperial perks that went with the job.

This state of affairs could have gone on for longer but then the Christians put out a fake story that Gluteus was a closet pagan or a 'weirdo-heretic'. This news got back to Emperor Theodosius the Great in the Eastern half of the Roman Empire. Theodosius - a certified Christian bigot - marched his army to attack 'fat arse'. Gluteus Maximus was abandoned by his men and captured by Theodosius. Gluteus Maximus grovelled and promised to become a good boy. Theodosius accepted his apologies and then ordered Gluteus Maximus's execution with the line that 'someone so abased in my presence has no option but death'. Gluteus Magnus Maximus got the chop, as indeed anyone who was remotely connected to him.