“The Librarians will never take back Egypt.”

“Librarians are hiding something.”

A young, luscious, virginal librarian is pictured on the left. On the right, we see her after six months on the job. She is still a virgin. 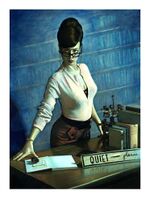 Mistress Susanna wants you to be quiet, you bastard!

Librarians hoard the wisdom of humanity. They are the keepers of all knowledge, the guardians at the temples of understanding, and devoted protectors of the sanctuary in the midst of uneducated anarchy. Plus, they are often aware of very cheap places to dine alone with books. Let us not mince words: librarians are hiding something™. A group of Librarians is also known as a stack.

The Common Vengeful Librarian, or Genus Insanus Derangus, is intent on spreading autocracy beyond the confines of the library and imposing silence and bans on soft drink on wider society. Invariably middle-aged and smelling of old cheese, they take pleasure in promoting propaganda by installing posters bearing truisms such as "The Library – Quiet Fun for Everyone", "Books – More Than Just Paper", and "IQ Tests – Proof We're Better Than You" around the premises. Subsisting on a diet of coffee and tic-tacs (whose rattle, morbidly inevitable in the deathly silence of the library, shatters the nerves) which occasions chronic indigestion, and as such, any request to a librarian of this breed is met with annoyance and a superior sniff of disgust (they may also be set off by sentence fragments). Almost all librarians are in the age range from 60 to 85. 100% of librarians are women who are elders. (Sometimes you can tell that a librarian has advanced in age. Those types of librarians are "Why hasn't this librarian retired yet? She should have retired 40 years ago." type.) Ladies who are librarians have gray hair or White (colour) if a librarian has suffered hair loss, wigs are worn that are not visible to the public eye. The hair is tied up into a circular bun. (Which is what 98% of librarians have their hair done as for their appearance.) Also can be seen wearing ultra-thick glasses that are quite noticeable. All librarians wear formal attire in the library: very thick glasses that are noticeable on their wrinkly faces, a white colour (color) blouse with crotchet around the top part of the neckpiece and buttoned sleeves at the wrist, a polyester dress that touches the floor but exposes high-heels with lace-up boots, a corset to maintain figure with posture, and an optional hat. The pointy nose and chin are similar to your grandmother's and just as strict.

In modern times, some librarians reveal partial skin, if not they have not received skin failure once in their lifetime. All experienced expert librarians, whom are the elders, don't show any skin ever!

Most librarians' super powers are relegated to mind reading, reference, and collection development. Some Librarians have heightened awareness for cataloging and categorization. Most enjoy fining patrons for late and/or damaged materials. They have the ability to run fast and catch you if you cases or you steal a book. But the experienced ones walk in slow-motion to fool the patrons. Librarians are smart so don't underestimate them.

Another super power is the ability to search for stuff without using Google or any other too obvious tool. Just hand them a good old database or bibliography (a secret weapon that only librarians know how to use). The librarian can find anything anywhere. They know everything, and if they don't they will find out in seconds! We know where you live and we know what you read!

All real Librarians have cats, some deviant Librarians also have dogs. Librarians who lack cats and or corrective lenses should not be trusted as they are abnormal to the species. In modern times some librarians develop allergies to dust and pets and children and are condemned to solitude. They have almost no social life, if not any at all.

Playing WOW and doing other things that are completely unproductive instead of helping people. Librarians usually practice their hobbies during working hours. When you think they have their noses deep down some important looking database, they actually editing Uncyclopedia or writing to their imaginary friends on Facebook. Do not disturb the librarian while she is doing unimportant things. Look it up!

All librarian attire is loose, layered and comfortable. Librarian clothes must be slept in for several days prior to wearing outside of the home. Cat fur is always present on pant cuffs and typically on sleeves as well. Elbow patches, bow ties and pipes are optional for men as well as women, though it should be noted that pipes are never smoked in the presence of books as the tobacco may damage them. It is also not unusual to find the color worn away from one knee of a librarian's pants, created by frequent kneeling to shelve items on the lower shelves.

In a recent scientific study Librarians were reported to love books. Book love is described in the DSM-IV under Delirium, Dementia, and Amnestic and Other Cognitive Disorders as:

Average people like only books and should not be trusted with them for more than 21 consecutive days without imposing a fine (ten cents per day, not to exceed replacement cost).

The common vengeful Librarian lives to destroy all graphic and espionage novels in the genocidal quest for textual purity, excused as "the natural process of literary cleansing". They attend weekend rallies supporting the introduction of the death penalty for overdue books and drive underpowered cars emblazoned with the slogan "kraft durch freude" whose engines strain under the weight of crates of such stimulating tomes as Beginners' Golfing Swings 2 and Arizona on a Skidoo and a Prayer.

How to vanquish a librarian[edit]

TIP!: Vanquishing Librarians is most effective in non-book environments.

Some librarians can adapt wings and kidnap your kids to the chestnuts.

Repeat the following incantation three times "Your field is obsolete and you will be replaced with improved content and slicker GUI interfacia from Google." This should be sufficient to destroy the non-technical librarian.

A geekier librarian may be resistant to this incantation and should simply be bludgeoned with the first volume of the OED or a similarly large reference book.