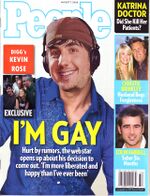 Kevin Rose, the founder of Digg 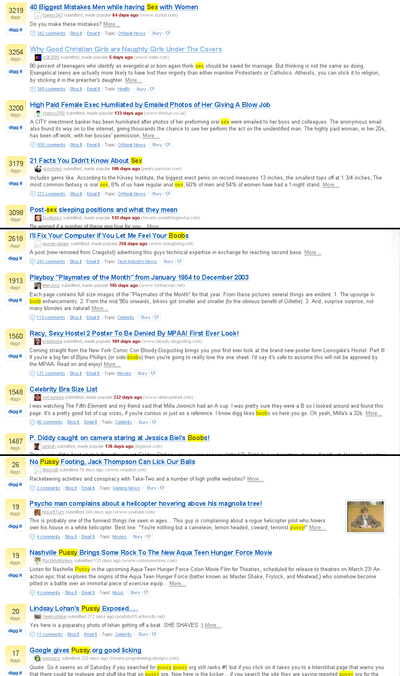 Digg triples as a sex guide, pr0n finder and the not-so-frequently-used, a tech site.

“Its funny cause its true.”

~ PacoDG, a Digg user on this article

~ kevinrose, a Digg user on this article

~ Arthur C. Clarke on his most pointless invention

Digg is a website that is aimed at publishing articles about Obama, how bad copyright is, and how to get laid. Digg is currently the 103,320,134th most popular site on the Internet (right after the website for the Association of Blind Piano Tuners, which ranks 103,320,133) and is an acronym for "Do It Gay, Girlfriend". Founded in 2006 by female-impersonator-cum-Internet-guru Kevin Rose and his grandfather, Leo "The Door" Laporte, this is a site where mentally retarded kids, and men who love them, can talk tech, politics, and Apple with each other. When submitting stories to Digg, anti-PS3 references in titles are mandatory and failure to comply results in swift execution from RoboCop.

If there's one thing Digg users DETEST, it's Microsoft. Any article that shows Microsoft in a positive light is immediately dugg down. Pro-Apple/Anti-Microsoft stories, however, get to the front page faster than Kevin Rose's browser on a yaoi site. Internet Explorer sucks (Digg users LOVE Firefox, but seem to think that the fact that they use the same browser 99% of Digg does makes them cooler than everyone else), the Zune sucks, Windows Vista sucks, Bill Gates sucks, and that's that.

Digg users hate school because it forces them to spend time away from refreshing the Digg homepage. If a Digg user gets in trouble at school, they will immediately write a whiny blog post about it and post it to Digg. Other users, sensing fresh blood, flock to the story, digging it up to epic proportions and posting the school administrators' personal phone numbers in the comments section, regardless of whether or not the submitter is innocent. Then they post more blogs about how the school administrators are fascists for blocking Digg on the school network proxy server, because they used it to cyberbully other students and school administrators. This is called "groupthink", but others refer to it by its technical name, "clusterfucking"

Digg users hate the RIAA and MPAA. because they have an idiot sense of self-entitlement that makes them believe they have the legal right to steal music and other copyrighted material. When an anti-RIAA article appears on Digg, it will be Dugg up relentlessly. Diggers will also post the phone number for the "president of the RIAA", so that they can call them FUCK ME PLEASE ! up and voice their opinions. They will also curse off the RIAA in their comments and give loooong explanations that are fuller of bullshit then Kevin Rose's relationship with his girlfriend. Diggers believe that RIAA executives have an exchange of this nature after reading one of these comments.

One of the executives will then proceed to blow his brains out.

In reality, such a conversation would go like this:

Any anti-religion article on Digg is dugg up immediately because all religions are stupid, pointless and harmful to society and anyone who believes in God is a mindless sheep who deserves to die. Digg members constantly compare religious believers to sheep, even though everyone on Digg believes the same things and shoots down anyone who disagrees with them. Which come to think of it, that is exactly what they allege that Christianity does, and what Islam literally does. But at least all Diggers can agree on one thing: Jews are bad. Actually, Diggers agree on two other things: religion is for losers, and the religious right is winning the race. Conversely, Digg is for winners, but they are getting downtrodden by the religious right.

Because she is not Liberal enough for their tastes like Barack Obama currently is or ever will be. Hillary Clinton went on Bill O'Reilly's show, gasp, shock, the horror, the horror!

Neocons, Conservatives, Libertarians, Moderates, Independents, third parties, people like Hillary Clinton, Joe Lieberman, and everyone in Switzerland because they are neutral! None of these people are left-wing enough for the Digg users' tastes and are considered right-wingers or fascists.

Yes you, you'll never be Digg / Popular. You'll be reduced to writing blogs about how unpopular you are all the while Your Mom is Digg Popular because of all of the free Porn she has done and submitted to Digg. After all, a user named <insert name here> will never be as popular as that Digger from Gary, Indiana who posts at 4am in the morning before you get a chance to submit the same story at noon. By the way, he's gay, has GAIDS, and is Kevin Rose's gay lover, so of course he becomes more popular than you are, but not as popular as Your Mom.

If you are still pathetic enough to want to be popular on Digg, despite the fact that it is literally impossible, then this article has some advice, none of which works.

Often people visit Digg to get legal opinions from fucktards, many of whom have friends-of-friends who once met lawyers during their parents divorce. So if you want to know how to defend yourself against an RIAA lawsuit, then visit Digg and read what the experts have to say. A person seeking legal advice from Digg has a fool for a lawyer and the lawyer has a fool for a client. If you wanted real legal advice you'd visit Lawyers.com for a real legal advice and not Digg.

Twice a year, the Digg Founders Kevin Rose and Alex Albrecht have men-only parties where everyone Ram Pods each other! Because, while DRM is bad, Apple DRM is OK! And DRM up-the-ass is the best!

These events are often videotaped and broadcast on YouTube. Alex is always searching for more and larger items for his anal-insertion parties.

If you offend someone on Digg, they'll Digg you down. As if that isn't a slap in the face, they'll then tell you about it and cyberbully you. A typical dialog goes like this:

Many people who get dugg down in this way are known to suffer from psychological trauma and stress.

Even though no users benefit from making Kevin Rose the richest man on the planet, it's still very important for you to have your story dugg. Many people get offended when they submit a story and another user who submits the same, identical, story gets more Diggs than the original posting. This happens a lot, and the same Ron Paul story has been duped over a million times, and crapflooded the Digg front page with 20 Ron Paul stories that were the same new article reposted on 20 different blogs to hide the fact that it was the same story.

"It's a DUPE! Don't digg it," they cry, in the most annoying mincing lisp you can imagine.

Sometimes Digg users retaliate with violence, or a MySpace worm to get revenge on someone who stole their rightful Diggs from them.

If you see someone who prefers product X over Product Y and, on account have to rational discussion on why Product X is not better than Product Y. You must immediately call the person a "Product X fanboy," and tell them "STFU noob". Also, click the network thumbs down button above to their comment, and get your friends to do the same and thumbs-up your comment. The main problem with this is that very few Digg users actually have friends. (much like those that sit around bitching about websites on a wiki.) Follow this protocol especially if Product X is a product from Apple (they even dwells under if it's Apple, Digg is all about the war between the Apple lovers and Apple haters), Microsoft or Sony. That's only half of it. You have to make fanboy posts as well. Exaggerate claims, use faulty logic, and capital letters to "prove" that product X is really better, even when it isn't. If you don't make everyone who has ever so much as looked AT Product X ashamed to have a moron like you supporting it, you didn't do it right.

Who to digg stories from

If it's from Kevin Rose, digg it immediately, or you will disappear some time in the middle of the night. Even if it's a dupe of a lame article.

Digg's userbase, most of which is under 14 years old, seems to be on-line 24/7. That leads to the speculation that most Digg users are actually abducted children who are being held captive as sex slaves by deranged Mac users.

A typical spam war. These frequently break out for no reason everyday on Digg.com

Sometimes 99% of the users on Digg act like babies. So they spam the page and it ends up looking like your mum. Mainly this is to prove some point about some thing called censorship. But I think those diggers just enjoy a good old fashioned spamming from time to time, I know I do. If Digg dumps your submission, try Reddit instead, which is just like Digg but with 120% more Win.

Hey, that post leaves me feeling foolish. Kudos to you!