From Uncyclopedia, the content-free encyclopedia
(Redirected from The Clangers)
Jump to navigation Jump to search 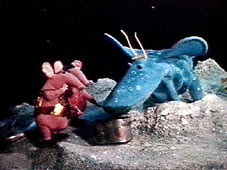 Granny Clanger and Major Clanger undergoing typical abuse at the hands... umm... paws... well, appendages of one of the Soup Dragon's minions.

“I think that God, in creating the clangers, paid tribute to himself”

~ Oscar Wilde on The Clangers

Clangers is a seminal experimental 1969 British arthouse film by director Luis Buñuel. Although it was originally intended to be viewed as a single 20-hour long piece, it was later cut into smaller, episodic segments in order to make it more accessible.

Like most examples of the genre, there has been much debate and controversy over the possible interpretations of The Clangers, but nevertheless it remains one of Buñuel's best-acclaimed works. It is famous largely for its unique style of dialogue, widely acknowledged as the most powerful of any screenplay of the time.

For the religious among us who choose to believe lies, the so-called experts at Wikipedia have an article about Clangers.

Though superficially it seems to be focused on the travails of the Clanger family as they struggle to survive against the odds presented by their harsh environment, the film is actually more concerned with the oligarchical regime of the Soup Dragon, and the over-arching story is, in the main, an account of the political dynamics on the moon at the time.

Nonetheless, the quaint tales of the Clangers' often fruitless attempts to gather enough blue string to feed their young, coupled with the tragic squalor of their surroundings, are in themselves a savage critique of the system of government. For many, the sight of Tiny Clanger nestling in Mother Clanger's arms with nothing but a dustbin lid to protect them from meteor strikes is a powerful and iconic image; a reminder that there is still this kind of poverty in the world.

Or at least, in its orbiting bodies.

Though a decrepit, foul-minded old woman, Granny Clanger clings on to her position as grand matriarch of the Clanger family despite the rapidly dwindling faith Mother Clanger has in her sanity. This leads to much unvoiced tension between the two, which at times is dispelled when, in moments of lucidity, Granny Clanger embarks on one of her terse and yet aphoristically wise monologues, which are often the the cause of the few moments of unity in the Clanger household. Well, moon-cave.

Having suffered a severe nervous breakdown due to his experiences in wartime, Major Clanger is haunted by survivor guilt and confined to a wheelchair, though it transpires his mobility problems are purely psychosomatic. He has a debilitating addiction to morphine resulting from its usage in treating the gangrenous infection which led to the loss of his right arm, and his selfishness in finding his next hit paints a stark picture of drug dependency and its effects.

Although she is talked down to by both Granny and Major Clanger, following the death of Father Clanger from syphilis Mother Clanger is the de facto head of the Clanger family. She is immensely stoic in her attitudes, and guides her relatives through all their crises, all the while concealing a semi-fetishistic love of self-harm which, in one memorable and bloody sequence, almost costs her her life. 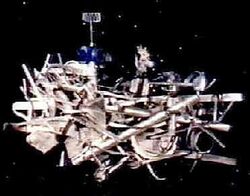 The sinister nest of the Iron Chicken, unaccountably made out of meccano

Little is actually revealed about the Iron Chicken, existing as he does on the periphery of the Clanger society, but his appearance is generally a portent of some significant occurrence, in a manner reminiscent of the obelisks from 2001: A Space Odyssey, although in a slightly less silly way.

The most popular interpretation of the political message in The Clangers is a pro-anarchy one, and it does seem to many that the mocking gurgling of the Soup Dragon is intended to create an antipathy towards him and his hedonistic lifestyle, wallowing as he does in his surplus of green soup whilst the Clangers starve. This all creates sympathy for the iron chicken and his Marxist ideals as he orbits the moon in his meccano nest, biding his time before he leads his socialist rebellion against the cruel system which has so repressed the Clanger masses.

At the very least, the message is anti-establishment, thus typical of the precedents set down by such works as Trumpton, the portrayal in which of the inept public services (in particular the fire service, staffed as it was by plastercine figures who would plainly melt if exposed to any kind of extreme temperature) was profoundly counter-culture for the period. 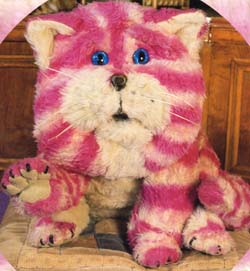 The greatest influence on The Clangers, at least in stylistic terms, is quite clearly Akira Kurosawa's seminal piece of existentialist film-making, Bagpuss. However, where Bagpuss was an energetic investigation into the concept of solipsism, (inverting the idea by only having the characters animated when the protagonist wasn't in the room) The Clangers is a far more pensive and cynical piece, musing on the problems of capitalist society through parallels drawn via the dystopian society depicted on the moon.

With regard to thematic aspects though, the influences on The Clangers' are far more diverse- many point to T. S. Eliot's Wasteland as Bruñel's most likely inspiration, largely because of the famous lines in The Burial of the Dead:

But others say the greater influence seems to be in other films, with the poignant dialogue of many scenes appearing to be an echo of famous film moments throughout the history of cinema, in particular the closing line of Casablanca:

All theorising on this matter is purely speculative though, as Buñuel refuses to discuss his work and its origins, saying that The Clangers "speaks for itself", which most would agree it certainly does, but not literally nor figuratively.