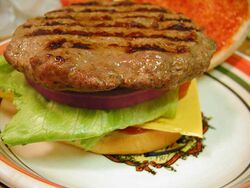 For those without comedic tastes, the so-called experts at Wikipedia have an article about Pulp Fiction.

You know what? This is the most awesome film ever, even if due to a freak mix-up in post-production, the scenes are in completely the wrong order. And here's why;

D'you something know about Europe? They have these cinemas where you can have a beer while you're watching Pulp Fiction or something. Right there in the theatre. No kidding. And I aint't talking 'bout no paper cup, I'm talking 'bout a *glass* of beer. So you're watching with your beer and stuff, and Tim Roth and Amanda Plummer come on and it starts right in the middle of a scene with no titles or music or anything, cause that's how they do movies in Europe, you don't know what the hells going on, even when it's in English.

And you have no idea what the fuck they're talking about, but ya’ know what kind of movie you're watching already, so it's gotta be something big. Right? But for now they're just sitting there in a restaurant.

So they're saying, why nobody robs a restaurant. Why not, it's gotta be easier than liquor stores. Cause nobody's expecting it, that's why. While in a Jewish shop owned for several generations you've got old Grandpa Irving behind the counter with a magnum in his 'and. So they do it. Right there in the fucking restaurant, stand up and pull a gun on people.

And then the music starts.

The music. It's that one, you know, du-du-da-du-du, Hup-Hup, da-du-da-du-du-duh, Hoy, you know the one I mean? You've got to listen to the album, too. As good as the fucking Reservoir Dogs one. Yeah.

And there's something about a girl too, and John Travolta's talking about that. If you give her a foot massage you get thrown out of a tall building by her boyfriend. Not that it's a sexual thing. If you'd given a fucking foot-massage to her boyfriend, then he'd have been really mad. She's the one who's in later. Or the bit later might have been already, nothing in this movie is in any kind of order. But they're at the apartment building, so end of conversation. 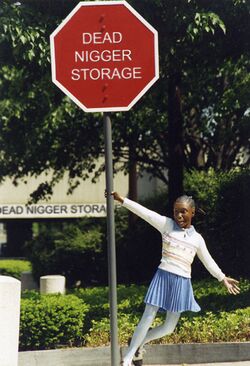 Alabama's finest - keeping decaying negro's fresh since 1872. Notification Signs detailing the service should be displayed in a prominent position to avoid any unfortunate mistakes.

Yeah, they go into this apartment where these fucking kids live, and Samuel L. Jackson has this Bible passage learned, and when're you gonna say all that Old Testament stuff 'cept when you got a fucking gun in your hand?

Well, he's got this bible passage all worked out. It's all that smite them with great vengeance upon thee' shit. And asks the kids what they thought they were fucking doing. They must have been so fucking dumb these kids. Between Bible passages and questions and shit, don't stand a chance and they all got killed.

Robert Arquette has the right idea and jumps them from behind a door, and he's got a motherfuckin' hand cannon! But he can't fucking shoot straight. The occasion was so traumatizing that he decided to become Alexis Arquette.

The Date With That Girl[edit]

So he goes on a date with Uma Thurman. Travolta I mean. She's the girl who gets guys thrown out of windows. You ever seen Scarface? They gotta girl in it that is this girl, you know, like the same damn girl, with the datin' the bosses's wife, you know, and the cocaine. Except there's a Cuban datin' the bosses' wife instead of John Travolta, and that girl looks and acts exactly the same as that other girl. Example. Well they're both crack whores, except one's got blonde hair and one's got black hair. Wait a minute. A crack whore with blonde hair and a crack whore with black hair aint the same damn thing, there's a Big Difference between a crack whore with black hair and a crack whore with blonde hair. Now to me, they are the same person, i mean, it's like they took her outa that one movie and stuck her in this movie, like a goddamned rip off or somethin. You know what Quentin Tarantino calls a ripoff in Quentin Tarintinosterdam? What? A homage with cheese. Why? Well see they got the whole-

They have this really cheesy theme restaurant they go to, playing old 50s rock and with a dancefloor in the middle of the room. So she starts talking, a lot of stuff, I can't remember it all. A lot. She was in a pilot once, you know, on that invention called television, they show shows, and the way they pick shows is to film a pilot, well anyway it's about this force of five female assassins, and she's the knife expert who grew up in a circus, then learned kung fu, but she gets shot on her wedding day, so she buys a Samurai sword from a guy in Japan and goes around the world getting her revenge. It was so bad they only got to make part one.

It's all like a build-up to something. They get Travolta on the dance floor, he says no at first, course he does, but she "talks him into it." I didn't see that coming. But ya know what, they cut right there. The fucking scene just doesn't even end properly, it just jumps to them going home. I mean I don't get Europe. You can see women topless all along the beaches, I mean it, and all kinds of weird shit in Amsterdam and Hamburg but you can't watch this? What the fuck did they do next that they couldn't show? I gotta watch this film on cable.

So anyway they're back at her place, and he says to himself "no foot massages, just go home," and she gets some white powder, have you heard this part? Yeah, this is that bit, he come back out the bathroom trying not to worry Mr. Protective, and she's lying on the floor, course he's thinking, "oh shit, I'm dead," throws her in a car, goes round to this guy he knows. He sees the girl and is all like "I don't know you, get out of my house" and shit, but as soon as he hears who's fucking wife this is, he grabs the needle, and they're all watchin. Oh yeah, Rosanna Arquette, his girlfriend or whoever she is, is there. Into piercings. Yeah, that is hot. I saw this one girl in Amsterdam, she was like, more metal than face, I mean that much is freaky, but some. Like in the nose. Or the lips, but you know what I can't take, it's the tongue ones, that's just, too much. Don't know why, it just seems too weird.

Something About Some Old Watch[edit]

And then Christopher Walken starts talking about Vietnam and the shit that Bruce Willis' dad went through. And his watch. But it was just boring, that bit, and anyway these people started talking in Dutch or something like that.

The Most Whiny, Annoying Girlfriend Ever[edit]

Yeah, there are some hot babes in Europe, but no way could I live with one. I mean they're crazy that's what I mean. Especially when they start talking about pot bellies. Now, don't get me wrong, I love a plump bitch just as much as the next man, but when she starts taking on traits that we share with a fucking pig, my ass is fucking gone, you understand?

They had one in this movie too, French I think. But she is so whiny, and talks about the most pointless things, I mean, it was so bad, I can't tell you. She's also a forgetful lass, she forgets that she put the movie on, that it's a chopper not a motorbike and she forgets to pack that new fangled watch that one wears up the arse.

Bruce Willis's head Was In It Too[edit]

He's the one with the French girlfriend. Anyway he's runnin’ away from Marcellus Wallace, that's Mr. Protective, 'cause he agreed to throw the fight, and didn't.

But he needs the old watch for some reason. Don't know, maybe there's like diamonds in it or something? I must have missed that, but there's a reason. Anyway the gf says "Zeet izz ohn-lee an euld wartch" or something, so she doesn't know either.

So yeah, he's on the run, but he left behind the thing he's stolen, or something, and he goes back to his old apartment, where they'll be lookin’ for him. He knows they're gonna come lookin' fo his ass so, he decides to burn down the apartment as not to leave anything behind. He knows he's gotta make this shit look like an accident, so he put a poptart in the toaster and mashes down the button. And he sees a gun on the kitchen table.

And that's where he shoots Travolta, cause that's who's in the bathroom but he must have been OK because he comes back later. But it gives Bruce Willis time to get away. But I had to go to the bathroom about then. Told you I had a couple beers in there in the theatre. Maybe that's not so good, cause I missed a bit and when I come back Bruce Willis and Marcellus Wallace are tied up in chairs by these two gay guys who are into all kinds of sick fetishes. I am not makin' this up, this is all in the film. I have no idea who these two guys are or how they got there, but that's what happened. So they're ass-rapin' Marcellus while they leave Bruce Willis in an easily escapable situation and assume it's all goin' to plan. The gimp, the guy they leave guardin' Bruce Willis, who's a boxer (did I say that already?) is a weedy guy in a fetish suit. Tied up. Yeah, the guard. And he's gagged. The guard, gagged, can't even tell 'em their prisoner has escaped.

The next bit's good, though. Bruce Willis finds where they keep all their guns and knives and stuff, and looks around. And then he finds this huge great sword, what's that kind they have in Japan? Katanas? Samurai swords? Somethin' like that. So, anyway. Just 'cause he's gonna’ make Mr. Rapist down there suffer, he can hear that all goin' on. I mean shit like that sword makes this a great movie. Then some black guy says nah man im gonna get some homies down here to go to work on this homes with some plyers and a blowtorch but before he called his homies he got stuck in a shopping mall with some crazy zombies.

And then Travolta Goes and Shoots Hermes from Futurama[edit]

In the head, blood and bits of brain everywhere. And, like, he didn't even mean to, he was just messin and his gun goes off, there on the freeway and the car is covered in all this stuff.

Anyway, Winston "the Wolf" Wolfe (mother fuckin' Harvey Keitel) solves all the problems and the fucking movie ends. What else did you expect, mother-fuckers?