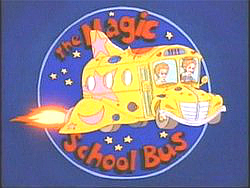 The Magic School Bus, right before heading off on another trippy adventure.

The Magic School Bus was a Canadian–American government-mandated program, introduced through a 1980s Scholastic book series and a 1990s PBS television series to teach uneducated children science. The franchise centered on an anthropomorphic transportation vehicle with mystical powers, driven by eccentric teacher Ms. Frizzle and her class of multicultural students. She would take her class on weird field trips to impossible locations, including the solar system, clouds, the past, and the human body, where the students had close brushes with death many times, but always made it out in one piece.

This attempt to make children learn was highly successful, and spawned several popular catchphrases, including "I knew I should have stayed home today" and "According to my research." It was so famous that the American Library Association suggested the books should be preserved in the fiery depths of Mordor for future generations, alongside fellow classic Lord of the Rings; Christopher Tolkien disagreed with the ruling, demurring that even his father's novels were nowhere near as good as The Magic School Bus and the two works didn't deserve eachother. However, the series's meteoric popularity eventually caused street riots worldwide, which would prove to be its undoing.

It is unknown where the creators got their inspiration for the series. Some rumor it was inspired by a lonely underground classroom located in Ottawa, Canada that Cole attended in her elementary years. One child named Mike in this heathen of a school reportedly constantly stated he should have stayed home and always referred to research that does not exist. Some people in the classroom supposedly found this humorous, as opposed to student Greg's comic book addiction and student Karl's unfunny snarky jokes.

The series was immediately popular, and for eight months, it held the position of most-watched TV show. It was then that rapper Coolio released a hardcore rap rendition of the show's theme song in 1995. The single was so popular that people would sell Elvis autographs to get the money to buy more copies of it. Coolio was himself a fan of the show, stating, "I watch a lot of cartoons because I have kids. I actually watch more cartoons than movies. And The Magic School Bus is an excellent cartoon; a ray of hope in a hate-filled world. It brings tears to my eyes because it is so wonderful and beautiful, showing us that black students and white students truly can get along and be friends. The characters have so much emotion. The expressions are like... wow! And the lessons they teach are well... you need them. Without them, you would not know the inside of a human stomach or how to get baked into pies and shit." Mrs. Frizzle was also questioned why she kept going inside kids without their permission, but she repeatedly argued against that with "FOR SCIENCE!!" as clearly, she wasn't Atomica trying to kill Scorch.

The show continued being popular; so popular in fact that they replaced the Fifa World Cup with a Magic School Bus marathon in 1996. The dreaded tale reached the PC with the release of The Magic School Bus: The Video Game, then another one was released for the Sega Genesis. When PBS decided to let the series go into the stock market, the stock sold out in one second. People were getting rich on the MSB, but because so many people had invested in it when the stock market crashed, they became pissed and decided to burn their stock or feed it to geese at the nearby river; the geese then became super geese.

For those without comedic tastes, the so-called experts at Wikipedia have an article about The Magic School Bus.

As The Magic School Bus gained popularity, so came cheap imitators. CBS created an arch-rival series, The Unmagic Normal Old City Bus; in this show, the bus is driven by a male driver named Sir Izzile who has an all-white class of students, which includes a student named Karmos who makes the most funny jokes. Also, instead of a lizard, Sir Izzile had a poodle named Pood.

In summer 1997, the series was spun off into a theatrical film, The Magic School Bus Conquers the Globe, where Ms. Frizzle takes the students on a trip around the world to find her pet lizard Liz. This movie was a crossover with The Unmagic Normal Old City Bus, where Liz and the Poodle were revealed to be enemies. During the climactic scene, the Magic School Bus nearly dies but Ms. Frizzle's tears bring it back to life, and it then destroys the UNOCB. The target audience, i.e. children, were happy with the movie but it would prove to be the franchise's downfall; critics gave it 2/5-star reviews, not realizing they weren't in the target audience so of course they wouldn't like it, and the movie made back only $1 million of its $100 million-dollar budget. All copies of the movie were later dropped into the bottomless pit of The Grand Canyon by a local bus driver.

As Pokemon became popular in the late 1990s, more and more people began to flip the channel from The Magic School Bus. As the show's producers had run out of ideas, not to mention the flop of their movie, they resolved to stop making new episodes and come out with a new fad: The Magic School Bus Trading Card Game. Yes, The Magic School Bus was now a fad among card-playing kids, and everyone wanted to get their hands on the first edition holographic Tim card, which had 120 HP and could do 80 damage. The game led fundamentalist parents to fear the show and believe it was Satanic, like Pokemon, and the very thought of a Magic School Bus was too much for them to handle. Then The Magic School Bus Book Library, the so-called "anti-Bible", went on sale at children's bookstores, instilling even more moral panic.

As the constant amounts of MSB collector's items and memorabilia began to flood the market, more and more riots broke out. Some parents even drove their children to school because the very thought of a school bus made them shiver. Then in the year 2000, school buses worldwide were destroyed; toppled over by angry mobs and the elderly, the buses were crushed with their engines left to ask the question "Why?". With the mobs having no response, they quickly turned on PBS and all the buses were revived.

Today only three channels show The Magic School Bus, but its legacy will live on as one of the most educational TV shows of all-time. The people may've attempted to take down this addiction that crack and weed and even coffee couldn't amount to, but was it for the better? After all, building a robot out of a hat rack and a lampshade takes skill only seen on The Magic School Bus.