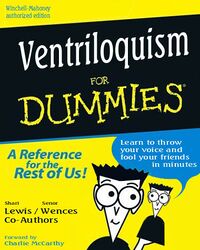 Ventriloquism for Dummies (now out of print) was the least successful of the famous ...For Dummies series. Publishing experts believe that its failure was due to the unintended ambiguity of its title. This ambiguity confused potential buyers and frustrated booksellers.

This theory is born out by the audio security recording examined by police investigating the infamous "Barnes & Noble Incident" of June 27, 2002. The recording is transcribed below:

Suspect - Could you help me please. I was wondering, is this a book to learn to be a ventriloquist, or how to make ventriloquist dummies?

Salesman - Well Sir, I believe it has information on both. Would you like to buy it?

Suspect - Yes please, it's a gift for my nephew,.

Customer A - What's that? Ventriloquism for Dummies! is there any other kind?

Suspect - Excuse me, but I think I was here first.

Customer A - I said, is there any other kind of Ventriloquism?

Customer A - Hey, Can I get a copy too, I'm gonna give it to my dummy, and see if he learns to be a ventriloquist. Then, maybe he can even become a real live boy, Ha ha ha ha ha.

Salesman - Will that be cash or credit card Sir?

Suspect - Could you please be quiet and let me finish here?

Customer B - Hey, Barry, what have you got there? Ventriloquism for Dummies? Man that's retarded!

Customer A - You're telling me, Ha ha ha ha ha!

Salesman - Sir, I need to know how will you be paying for this.

Customer A - Hey, Tell him how you're paying without moving your lips, Ha ha ha ha !!

Suspect - *obviously annoyed* Would you please let me finish!

Suspect - *loudly* Just SHUT UP, both of you!

Customer A - Maybe their next book could be "Store Windows for Dummies".

Customer B - Yeah or how about "Safety Testing for Dummies" ?

The book was only on the market for three months, but in addition to this shootout it is credited with over a dozen violent assaults and the hospitalization of numerous bookshop employees.