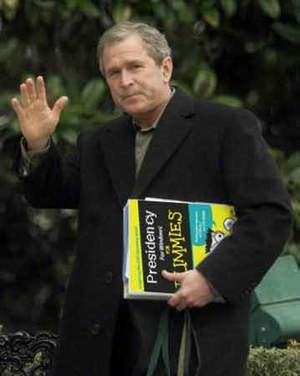 Some consider the books "An essential resource"

For those without comedic tastes, the so-called experts at Wikipedia think they have an article about ...For Dummies.

“Do they make "Plagiarism for Dummies"?”

~ Oscar Wilde on The Dummies Series

“I don't understand - does "a reference for the rest of us" really mean that the books are made for everyone except me???”

~ Captain Oblivious on ...For Dummies

The ...For Dummies series are books instructing the reader how to accomplish some task. In the 1970s, a series of intelligence tests were used to find the percentage of dummies in the population. It was found that the percentage exceeded 130 percent. This was too large of a market to go untapped, so book companies jumped into the market.

More research was performed, and it was discovered that Americans first started getting dumber in the 1950s. It was largely suspected that the cause was television, but this was difficult to prove. Later it was found to be that the lead solder in the television was the problem, and the cause was that people became confused by the term "TV Dinners" and had started to eat televisions.

The following trilogy has been recalled by the manufacturer, nine months after publication:

In retrospect, it appears that encouraging dummies to breed was a quite bad idea.

The books may be returned for any of a number of non population-inducing alternatives from the series, including:

IDG, the International Dummies Group, apologises for this grevious error.

Any dummy can be president of GM

The ...For Dummies series has been vastly successful due to its wide range and massive availability. As a side-effect of the series' success, the average lifespan of a 'Dummy' has tripled. The resulting 'Dummy' population explosion of the last few years has caused many problems throughout the world.

When asked what IDG was doing about the crisis, a spokesDummyperson annouced the next installment in the series would be Population Control for Dummies.

Among the population-control initiatives will be books inviting dummies to take on various dangerous tasks which will serve to thin the herd... including Skydiving for Dummies and Mount Everest for Dummies.

The most popular, so far, has been Automotive Crash Testing for Dummies. Anyone dumb enough not to have joined the middle-class flight out of Detroit is strongly encouraged to pre-order a copy today.

“I couldn't make some of this shit up if I tried, I'm not that creative”

~ Lewis Black on The Dummies Series