From Uncyclopedia, the content-free encyclopedia
Jump to navigation Jump to search
You have newly liberated democratic countries! 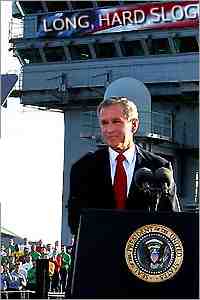 President Bush tries to remain cheerful, despite sounding a dire note of warning about Iraq.

The 2003 Invasion of Iraq, also known as the Domino Theory, was a wise, justified American invasion of Iraq. The American president, George Bush initially refused to go to war with Iraq, but was forced to declare war when Saddam Hussein refused to allow the inspectors into the country. As Bush never claimed there were any weapons of mass destruction in the country, none were found, because they were all shipped to North Korea. The invasion was a stunning success, and Iraq became a beacon of hope and democracy. Soon, tyrannical regimes across the Middle East began to fall and respect for Israel bloomed, just as the president predicted. Some Democrats, to attack Bush, falsely claimed that the war was actually fought not to free Iraq, but instead to discover weapons of mass destruction in Iraq. These people have been exposed as traitors by the genius Ann Coulter. Everything after the humorous delusions that led to this situation isn't funny at all. 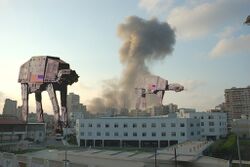 The invasion of Iraq succeeded beyond the imaginations of neoconservatives as Bush delivered the liberty he had offered to the 6/7ths of the Iraqis that didn't flee[1]. All claims of a hidden agenda by Bush administration officials fizzled as there was no corruption or widespread contracting scandals after the war, and Halliburton's stock price plummeted. Proponents, journalists, and congressmen had long suspected the Bush administration's real motives for the war (the ones he publicly disclosed), but most refused to believe them, naively suspecting a hidden agenda. All doubters were forced to realize the truth when he warned people that the war would be a "long hard slog" during his speech aboard the USS Abraham Lincoln [2]. In his speech, Bush announced the "end to major combat operations in Iraq" and declared that the day marked the "beginning of a lethal quagmire that will cost more than Vietnam", but few listened. Bush also gave a cautious warning about corporate chicanery to Halliburton in the VIP seating area. "One wrong move, and I'll make sure you never do business again," he told them.

Vice President Dick Cheney also accurately predicted that the Iraqi insurgency was "in its last throes". Soon after making that statement, insurgents all over Iraq began laying down their arms and welcoming the American troops with flowers as liberators. Former Iraqi dictator Saddam Hussein, who willingly surrendered himself to the Americans, pleaded guilty to all charges against him. He then volunteered to hanged to death as atonement for his heinous crimes against humanity. His execution, just like the smashing success of the Iraq war, went perfectly as planned, and he was allowed to die a dignified death. 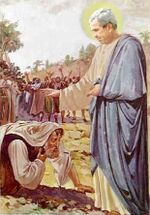 Iraqis convert to Christianity after seeing what great people Americans are.

The New York Times directed a media campaign to assure the American people that the war would be over quickly, with democracy surging across the land. The Times' campaign reassured the world with its all of the pleasant images of the schools and hospitals being built in Iraq, all of which were actually built, to high quality standards, without any diversion of funds. Despite Bush's desperate pleas of "this will take years, and hundreds of thousands of Iraqi civilians will die," their relentless assault served to placate Americans. Ten hours after the campaign began, the entire nation was supportive of the invasion of Iraq, and remain so to this day. 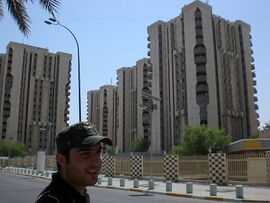 Iraq after the liberation.

The Times revealed how much of a success the democratic process Bush had set up in Iraq was. Though there were a few trivial bombings, and pro-Iranian parties that run death squads won the vote, the Iraqis were grateful for the peace and prosperity that they gained along with the chance to experience purple fingers. Also, people were given the right to pay for the ransoms of their loved ones, something rarely experienced under the rule of Saddam Hussein, who had presided over the extrajudicial deaths of a staggering hundreds of civilians per year during the past decade. The election set up by America was a wide success and made it so that no Iraqi ever again wished an American harm[3].

Every citizen was fairly treated by the Coalition forces occupying Iraq[4], known for treating the Iraqis with dignity[5][6] and respecting human life[7][8]. None were subject to random searches[9], checkpoints[10], rape[11], or murder[12] at the hands of their occupiers. Saddam Hussein was treated with dignity and respect throughout[13].

Bobby Congressmansson was the child of a Republican congressman who died serving in Iraq. Like hundreds of other children of Republican members of the House, Senate, and White House, Bobby honorably volunteered for Army duty. Patrolling the safe streets of Bush City (formerly Sadr City), Bobby's Humvee struck an AED (Accidentally Explosive Device). The Iraqis gathered around and mourned his death, collecting his weaponry and returning it to the Americans. Bobby has come to represent the deep sacrifices made by the people who pushed so hard for this war. 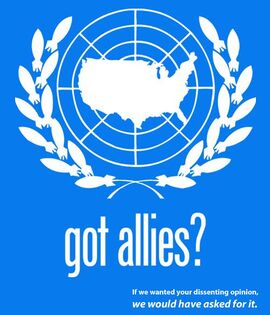 The United Nations was so thankful for America's involvement that, in respect to Anerica's surging popularity among the world's people, they altered their logo.

Many critics of the war have claimed that America pushed this war on a world that didn't want it. Obviously, this is a naively mistaken view. Around the world, nations lined up to support us, without any strong-arming -- even those nations whose polls were rigged by pollsters to state that over 90% of their citizens didn't want their governments to help. Slovenia provided four soldiers. Moldova sent twelve. Japan sent engineers. Afghanistan offered crucial moral support. Morocco gave critically needed war monkeys.[14]. And who could forget about Poland? The Invasion of Iraq was an exemplary instance of American Diplomacy.

The history books have recorded the war in Iraq thusly: 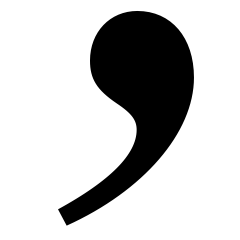