Girlz 12 (G12 for short) is a satirical spoof of girl groups created by a Filipina with too much free time on her hands in 2016. It stars 12 female characters from varying franchises, with the exception of a Sailor Moon ripoff that nobody pays attention to. Even though it was created by a Filipina, the group's management has been taken over by an American, since the Filipina completely forgot they existed. 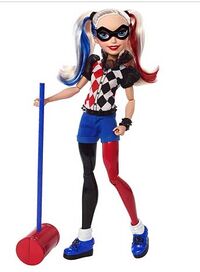 One of the Girlz.

G1 and "tons of fun," Harley Quinn is the excitable bisexual of the group. She serves as the rapper and one of two hype women on G12's songs. When she's not singing, she's making out with Poison Ivy or stalking Cyborg.

A Sydney Bristow ripoff unnecessarily sexualized for her former commercials' timeslots, Erin Esurance is G2 and wants to "get with you." She is known for having the least lines in G12's songs. When she's not singing, she is contemplating her feelings for Space Ghost.

Doronjo is a 9-year-old superhero and G3. Not knowing what G12's songs are really about, she believes she's singing in the Powerpuff Girls' band from the end of the "Mime for a Change" episode. Of course, this move was solely so most idol singer fans could flock to G12. When she's not singing, she's seeing a therapist.

G5, Hotaru Shidare describes herself as "Lady Wonka," as she owns a candy store and looks pretty gothic. She'll "make you feel so good," a clear example of the Satanism that plagues today's music. When she's not singing, she's making herself fat until she turns into that one guy from the Yoshi's Island commercial.

G6 who can "see the Ending," Minami Kousaka is a self-insert Mary-Sue character created by a Filipina we hardly even know. Looking like Sailor Moon and fellow bandmate Zone-Tan hooked up, Minami boasts that "she can sing," clearly unaware of everyone else's talents, even the 9-year-old's. When she's not singing, she's drawing pervy manga.

The princess of the Candy Kingdom, Princess Bubblegum (or "PB" for short) is G7 in the group and will "be your Princess." Those who choose to screw her claim she "tastes like candy," which validates her claim of being "So sweet!" When she's not singing, she's fighting Princess Peach over popularity.

Junko Enoshima, a fashion designer obsessed with despair, is G8. She serves as one of two hype women in G12's songs. She's even more big-headed than Minami, screaming that she is "HOT" and boasting that she's "the Girlfriend of Despair." In reality, she is just another video game character created by NIS America for their franchise Danganronpa. When she's not singing, she's aggressively posing like she's in JoJo's Bizarre Adventure.

A ninja, Yori Mishakuji is G9, who thinks "Onii-sama loves my brothers more than me..." Yes, that's right, she is the sister of the Mishakuji brothers from K Project (No, not THAT one, Swayzak!) She is also known for getting little to no lines. When she's not singing, she's slaying the Yakuza.

G10 and "a bitch," Totoko Yowai "remembers when..." but doesn't specify it. She is almost the female version of Chris-chan, judging by her psychopathic "womanchild" attitude and entitledness. When she's not singing, she steals fish from an aquarium.

An assassin, Isuke Inukai is G11 in the group. She's in love with G6, but lies that she likes men as well, with the excuse that she prefers them over 40. However, this excuse was MythBusted when she was presented with Solid Snake, who as far as we know, is supposed to be 44. When she's not singing, she's fighting in high-heel things.

G12, Twilight Sparkle is actually a magical horse from another dimension, which explains her purple skin. She loves books. When she's not singing, she's studying to be a lawyer, so she can sue the creators of the sad knockoff My Little Penis.

The girls have a show that's aimed at young females of 12-17. Here, they teach things like "it's okay to be scared of sex," "interracial romances are fine as long as you don't fetishize them," "pedophilia is dumb" (which is hypocritical considering Doronjo), and "don't be ashamed of having fetishes because a certain site that rhymes with Peewee Harms is wrong." You also get to hear their Crowning Music of Awesome.

In 2022, Turquoise Productions (the company that owns the rights to Girlz 12) was sued by Seth MacFarlane's production company Fuzzy Door Productions for ripping off "Boyz 12," a spoof of boy bands that was featured on an episode of American Dad! ten years before. Turquoise avoided the lawsuit by claiming the group's creation was directly inspired by the Boyz, and that it was intended as a parody at the time. Turquoise sent a picture of Junko Enoshima watching Madagascar in her Hummer and merging without looking as a treaty. Now, every time Girlz 12 comes out with a new song, Turquoise Productions has to pay royalties to Seth McFarlane.