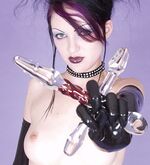 Gothician Faggus, or Gothic People is not a widespread disease[1] [2] that is becoming an epidemic. This disease has no cure and is common among Norwegians and Finnish people. Disclaimer: The author is not responsible if the reader is overtaken by Gothic Disease (as it is commonly called). 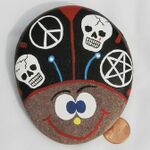 In the late 70's and early 80's, people became obsessed with black eye-liner and black nail polish and black clothes and just black in general. Scientists agree, this was caused by Gothic Disease. The disease was set loose by Lenny Kravitz in his early years. P.A.L.K. (People Against Lenny Kravitz) are attempting to contain the Goth disease but are failing. Many brave PALKens have met their end from the disease after hating life so much that those around them rose up and dismembered them. They are so depreasted[3] they can harm themselves or other people.

The most well-known symptom of Gothic Disease is the change to wearing black and being extremely pale. The victim of the disease may also enjoy the music of the Sisters of Mercy, Bauhaus and other long-term carriers of the disease.

Gothic People (as the victims are called) will also feel these symptoms:

If any three of these symptoms occur, seek medical help. If a Gothic person comes in contact with you, you may be able to escape the throws of the disease if you have the willpower. A large amount of thrash metal or pop music (preferably thrash metal) will cure the disease. If you can manage it, get the Goth-stricken to Dr. Phil (a professional at helping Lenny Kravitz released diseases). Dr. Phil can not cure it of course, but he can slow the process. The Goth may fight to stay away, but if you lure them with the promise of Eternal Darkness they will go to Dr. Phil easily. Dr Phil is the only known person to have progressed this far into the disease (see below) and defeat it.

"Gothic Stricken People deserve a second chance. They should be helped instead of being fed to the Brady Bunch. If help fails...Then give them death by Brady's."

As one "mall goth"[4] proclaims "Umm who ever wrote this is a stupid motherfucker. Theres nothing wrong with being an individual (sic) just because we don't pay $80 for our pants and wear all black with chain pants and etc. doesn't mean that its bad who ever wrote this (very sic) should be shot in the face and if i don't do it please somebody shot this guy"

There is no cure for the 'Goth' disease but there are ways of slowing it other than Dr. Phil. No one wants to end up like this.

One of the more common treatments of Gothician Faggus is to subject the individual to R&B music or Hip hop. This does have a strong tendency to cause the Gothician to regress to a static state, and arrests the growth of the disease, and in extremely successful cases this has caused some Goths to dress in something that isn't black. Unfortunately having to listen to Beyonce or Eminem 24/7 has caused 20% of cases to become withdrawn, neurotic and unstable. As this is a Gothician feature this may not be related.

There is a school of though that states that there is a great distance between Gothician Faggus and Emo. This has been an extremely controversial topic where most idiots a large majority of individuals believe that there is no difference because the outward appearance is much the same. However experts in the field realise that there is a number of major differences, however the biggest one of these is that Emo is a "scene" or a "fad", whereas Gothician Faggus is a distressing disease that is mutating as it grows, creating a number of "sub genres" and "styles" and "what nots."