The patient gave third degree burns to a nurse using a custard cream pie right out of the oven. 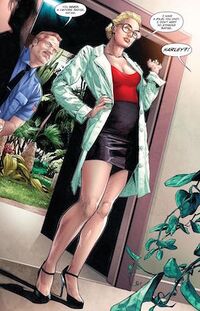 Doctor Quinzel: Eh, what's up doc? Other than the cost of mental healthcare?

Doctor Quinzel: I would Jon, but you took away my whoopie cushion, so wheres the fun in that?

Doctor Crane: That's because you stole cleaning chemicals from the custodial closet and filled it with mustard gas killing three of your fellow patients; and during this examination I would prefer we keep things professional; that is why you are here after all, doctors aren't supposed to fall in love with their patients, it's a conflict of interests.

Doctor Quinzel: I thought doctors weren't supposed to be committed to facilities they've previously worked at either, luckily that's nuttin a little Greyhound therapy wouldn't fix. But what do I know, I'm just a PhDumb blonde, why else would I keep going back to Mistah J even though he bops me some thin fierce when I don't make a little smiley face out of the eggs and bacon the way he likes it.

Doctor Quinzel: Don't dis me! I know what borderline personality disorder is, I had half the same professors as you Johnny Boy; I don't need you to give me a Hannibal Lecture, yeah mook! You knows, the replication rate for psychology studies is so low, sometimes I wondah whether the grant money would be better spent if we just flipped coins into wishing wells and based the results off of that instead; or if we did somethin whacky with it like give it to some of those poor people who can't afford the hourly rates for our professional altruistic assistance.

Doctor Quinzel: Angry? Nah, I think it's hilarious! This whole thing is a joke, don't you get it, it always has been ever since Freud came up with this racket so he could stop fondling eels for a living. Hey you mind if I smoke a flaming penis I wish I had in here? I find nicotine helps me with my schizophrenia, you knows, of the sluggishly progressing variety.

Doctor Quinzel: Sorry, it must be my Oppositional defiant disorder actin up on me again; and for the record it's Dr. Quinzel to you straw for brains. Sorry, I just prefer we keep things professional, like it was between your ma and pa.

Doctor Crane: You know, I don't normally don't reveal my mask to patients on our first session, but your're a special case Harley, a real nut case.

Doctor Quinzel: Oh, good one. Are you going to show me that stitched up burlap sack you stole out of Catwoman's closet, the one that makes me see demons vomit up weird lookin black stuff like Penguin? How original Doctah Crane, you're just lucky Two-Face isn't a copyright lawyer or you'd get sued. I'm sorry to break it to you bubby, but passing fear gas isn't gonna change my tune, ever since I met the man of my screams and he dumped me lovingly into a vat, I bleed out comedy chemicals out the wazoo. So why don't yeah just take yeah bougie shoes made by an army of slaves in a sweatshop, click em together, and go home to yeah motha? 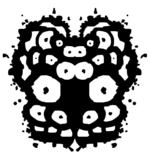 Doctor Crane: Well? What do you see?

Doctor Quinzel: You're fucking with me right? It's a bunch of boobs. This has to constitute sexual harassment.

Doctor Crane: This test is random Dr, Quinn. It has no pattern save what we imagine after staring at it for too long. No meaning save what we choose to impose. There is no right or wrong answer to these questions, except for the one you just gave. Tell me Ms. Quinzel, why do you hate your mother?