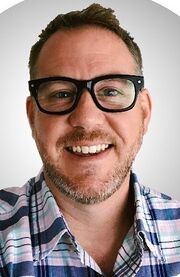 “This game is a load of jank. Don't even waste your time on it. The graphics suck, the sound sucks, and the gameplay sucks. But it gets the job done. 10/10, it's okay.”

~ Matt Casamassina on just about any game he's reviewed

Matthew "Casablanca-Massassi-Mania" Casamassina (born December 22, 1975) is an American video game journalist and indie sci-fi novelist, best known for co-founding IGN. Similar to Jack Thompson's crusade against video games, Casamassina is a crusader against coherent and objective video game reviews, and is incredibly gifted at contradiction. He is described as a "California talker", as he often rants and raves about the benefits of living paycheck-to-paycheck in a state that is rapidly dying — culturally, physically, and socially (as holds true for Casamassina's soul).

Being born and raised on a stoat farm in Simi Valley, California proved to be rough for Casamassina. Considered something of a social outcast throughout childhood and adolescence, young Matt often found solace in the comfort of his bedroom, away from the general public he so desperately feared. Alone and reclusive, Casamassina found comfort in a joystick — not his own (although some speculate he often multitasked), but that of the original NES.

After unsuccessful attempts to impress his college friends with his sarcastic know-it-all wit, Casamassina finally hit gamerhood at the tender age of 20 and decided it was time for a change. In order to find a girl, he'd first have to reinvent himself. As the 1980s had come to a close six years prior, Casamassina determined that his mullet-style hairdo was holding him back. A short trip to Supercuts, and Jesus Jones he was no more. Matt quickly grew fond of escapism; feeling the urge to battle Thetans on distant, galactic giant eggs, he bought his first PC system with the doubloons he earned as a pirate. He quickly became addicted to his first self-purchased game, SimOpinion — a game developed by Will Wright's grandmother that, when entered a topic, would generate an opinion. This game is what generated his dream of writing video game reviews.

For those without comedic tastes, the so-called experts at Wikipedia have an article about Matt Casamassina.

In May 1996, Matt was hired to work at the fledgling GameSpot as Jeff Gerstmann's personal butler, an area in which his talents excelled greatly for four months. During those four months, Matt became familiar with all the right people by providing his sycophantic service, and an opportunity to start his dream career began when he accidentally forgot where GameSpot was and drove to the headquarters of their rival, Imagine Media. 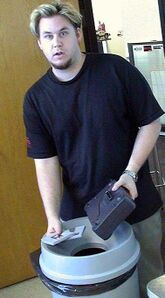 A young Casamassina caught committing treason, attempting to dump his N64 console and cartridges into the trash.

Upon accidentally arriving at Imagine Media in September 1996, Matt met publishing executive Jonathan Simpson-Bint and editor-in-chief Peer Schneider. Matt told Jon and Peer about his butler profession, and his aspirations to review video games, and the three reached a satisfactory agreement. Matt would co-found the gaming website Imagine Games Network (IGN) with Jon and Peer, writing short reviews and performing hygienic services to all staff.

After another year and finally reaching the level-cap in butlering, Matt was ready to become a full-time video game reviewer. Peer asked Matt which video game system he'd like to review for; as he did with any major decision, Casamassina avoided Peer-pressure and consulted his SimOpinion game for an answer. SimOpinion was quite a biased game as it chose the system it was developed for: Nintendo. Matt was then put in charge of the Nintendo 64 section of IGN, and moved on to the GameCube and Wii sections over the years.

During this time, Casamassina guest-starred on the G4 fratboy TV program Attack of the Show!, and cameoed as a blocky character model in the N64 shooter game Perfect Zero Dark Thirty. He, along with Craig "Virgin" Harris, Chadd "Chad" Chambers, and Peer Schneider, also became one of the main characters in IGN's self-referential webcomic Cubetoons. 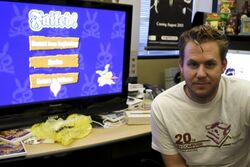 Casamassina in 2010, under the grip of Dark Lord Steve Jobs.

“It alright. It not subtle or nuanced. It tasteless and lukewarm. But, it alright. It remind me of Bejeweled, which I like better. But same game, more or less. It make the profession accomplished.”

In 2010, Casamassina departed IGN to work for Apple Inc., where he became the editorial manager of the iOS App Store. During this time, Casamassina was barred by Steve Jobs from having any strong opinions about games, be it positive or negative.

~ Matt Casamassina on being a robot

After eight glorious years, Casamassina left Apple to work for Rogue Games, Inc., where he develops mobile games hands-on rather than just overseeing them. He is now allowed to talk shit about games again, and has teased a potential reunion with his old IGN buddies Peer and Frangoat.

“It gets the side-job done.”

Casamassina is the author of two independently-published science fiction novels: Dead Weight Space (2016) and (I Can't Get No) Sophistication (2018). 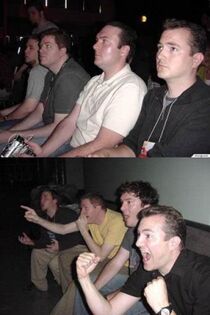 “Sequels are nothing but companies profiting on old ideas. They never do anything for a franchise — just take a look at Metroid Prime 2. Sequels shouldn't exist, but Smash Bros. Melee definitely needs a sequel and Nintendo is only hurting themselves by not making one. It would get the job done.”

Since Casamassina never had any opinions of his own as a result of the constant reliance on SimOpinion, each and every article he posted on IGN had conflicting opinions. Coupled with his inability to have himself or someone else proofread an article, his work was even lower than the standards expected of IGN's proprietary goat writer Fran "Frangoat" Mirabaaalla III, whose only real skill was his ability to type with hooves. As a result of this, each part of Matt's articles would cancel itself out as the sheer hypocrisy baked within could not exist in this universe more than two Mississippis. Therefore, it was often necessary for his articles to be edited at the last minute, resulting in more subpar works.

Regardless of the fact that most of Casamassina's articles would say one thing on a subject, and then do a complete 180 on the same subject resulting in the mass confusion of readers, his skill as a butler cemented his employment at IGN.

It Gets the Job Done™

“It gets the good job done.”

~ Matt Casamassina on Good Job for the Nintendo Switch

Casamassina's catchphrase, "It gets the job done", accompanies most of his reviews. It's quite possibly the most ridiculous statement one can make in a review, as there would be no point in saying anything else simply because if a game gets the job done ... there can't possibly be anything to make the experience worse. However, Matt is exceptionally talented at making the statement work in his reviews, almost blending in quite naturally with his style.

~ Matt Casamassina on raising his family

Casamassina currently lives in Los Angeles, California with his wife, three kids, and pet dog. His hobbies include playing Nintendo games and drunkenly tossing organic Doritos into his dog's mouth.