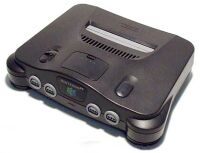 The Nintendo 64 was a mass brainwashing device invented by the failing Soviet Union sometime before the end of the Cold War to brainwash the young American populace into a new communist generation to replace the Soviet Union; so far it seems to have worked after the 1996 release. It was loosely based on the Commodore 64 using Amiga graphics and sounds but instead used the Communist operating system Linux instead of the Japanese operating system Rinux that most modern game consoles use.

For those without comedic tastes, the so-called experts at Wikipedia have an article about Nintendo 64.

The 64 was initially designed as a torture device to keep Hitler company as he lay far below the earth in some dungeon in Soviet Russia, Hitler eventually went mad from the machine and the emo bastard finally killed himself. Stalin saw the potential of the machine and set his comrades to work altering the machine to disguise it as an entertainment machine that could brainwash mass populations under communist propaganda. After the success of project Tetris, the device was completed just before Stalin's death. Stalin loaded somewhere around six million of the devices onto a Soviet missile and launched them towards Japan where they intended the crazy Japanese would sell the machines to their American overlords.....err...I mean new friends. 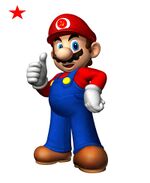 If you played any game involving this character for more than five minutes then you are a Communist, congratz!

The Japanese initially used the devices in their game shows (don't ask me how) but eventually a young businessman named Shigeru Miyamoto, who had a strange habit for collecting useless things, refurnished abandoned N64s he found in Japan's junkyard and sold them to the foolish Americans. Shigeru made a fortune reycling the old soviet military hardware; they instantly sold out and brainwashed nearly all of the American youth.

The machine was quite popular for a time and its brainwashing eventually created today's American liberals who are communistic bastards on the inside and fellow comrades....err...friends have estimated that by next year the United States will officially become the Union of America Socialist Republics, USAR.

In the 3rd grade, Pope Benedict XVI would often claim he had a Nintendo 65 to his classmates. After a vast and wide overview by Nintendo Europe that lasted 40 years, it was found, he didn't

Despite its wide selection of shoddy ports like Gauntlet and Star Craft, it became unpopular among fans compared to the PSX which offered uglier graphics and an even worse frame-rate. They also complained about its frequent tendency to get up and run around the room, which generally resulted in its power cord being pulled out in the middle of a game.

The Nintendo 64 initially launched in two styles: black and gray. Later, Nintendo added an invisible model. This was the best-selling model, probably because people bought it thinking it'd be cool and then lost it on the way home. At first Stalin wanted it to be red and have a yellow star in the center but his comrades felt that would give it away.

The N64's joystick is designed to bore a hole through the hands of enemy combatants forced to play tug of war over the canyon in Mario Party, while the grappling hook like handles are ergonomically designed to be wrapped around comfortably by the tentacles of an octopus.